Can it really be true that BoJo has been forced out because (1) he hosted maskless gatherings during the pandemic, and (2) because he didn’t dismiss Pincher the Whip (how Dickensian!,) as a result of Pincher having “groped “ other adult males?

O my America! Partying barefaced at the French Laundry didn’t hurt Newsom, he won a recall effort after that! And, in our country, wouldnt Johnson be likely to be in MORE trouble if he HAD fired an openly gay man?

I have the impression from my reading that nearly ALL British men are gay or bi. Jo Walton wrote tht they can all be classified as Athenian ( they’re gay but they will marry and sire a family) or Spartan (they won’t.) I mean surely this matter coulda been handled within the Carlton Club, by just blackballing him for lewd behavior or sump’n.

But more importantly: does BoJo’s exit, as some are already crowing, signal the end of Brexit and of the Union with Scotland?

How say you, my masters? 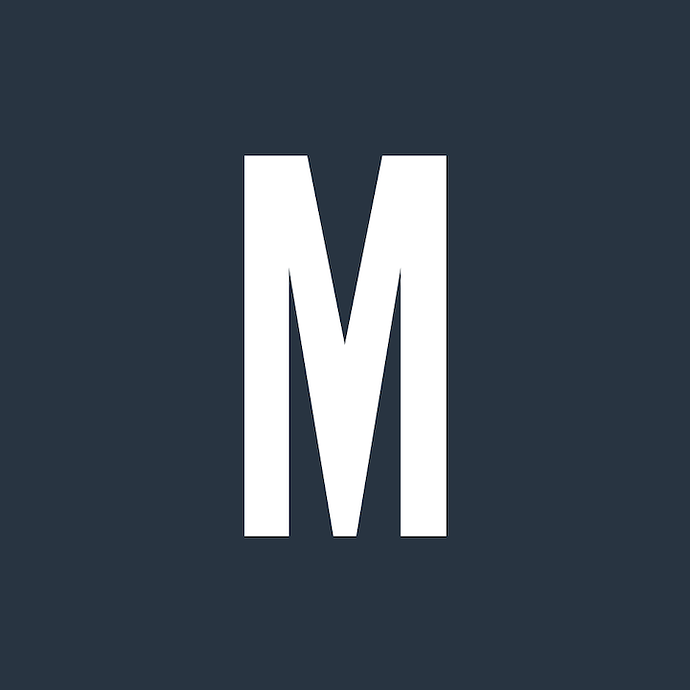 Who will win the next UK Conservative Party leadership election?

Metaculus is a community dedicated to generating accurate predictions about future real-world events by aggregating the collective wisdom, insight, and intelligence of its participants.

The most reliable guide to the pulse in Jolly Olde England is the on-line readers comments on the London Daily Mail (UK version). The underlying reason for the distaste of Boris is apparently (1) he did Brexit, winning him the hatred of the nearly half of the voters who opposed that, and (2) he did not do Brexit properly, winning him the disgust of the other half of the voters who supported it. And then there are all those who find Boris’s current wife to be an unpleasant woman who has pushed Boris into supporting unpopular Far Left ideas.

That said, it might be worth placing a bet that the next leader of the “Conservative” Party, and hence the next Prime Minister in that strange country, will be … Boris Johnson. Daily Mail commentators seem to suggest that all the alternatives to Boris are even more unpopular than Boris himself – mostly with good reason.

Johnny Rotten (John Lydon) has weighed in, and Jacob Rees-Mogg is his pick. 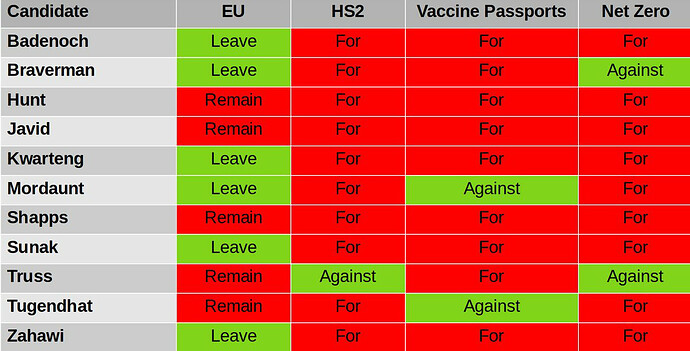 HS2 is the UK “railroad to nowhere” boondoggle. 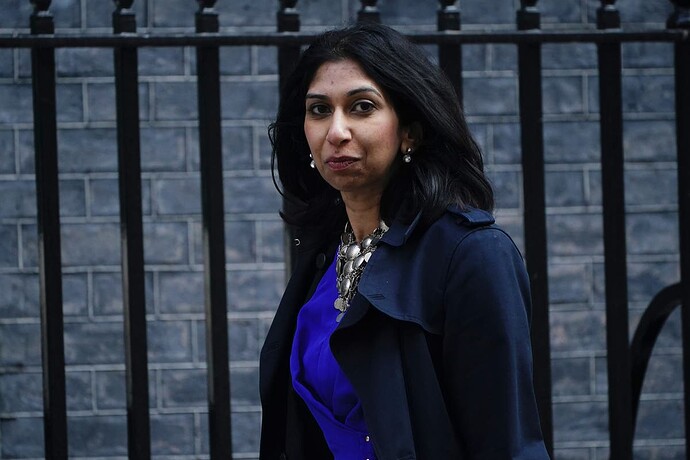 Opinion: Suella Braverman as our next prime minister? Be afraid, be very afraid

She won’t just carry the torch for Brexit, she will wage a ‘war on woke’ while doing so

Is that enough for you to support her?

Is that enough for you to support her?

Heh. I picked her for having a “green” assessment for the two questions I think most important of the four John picked for his chart.

Interesting that the split among the 11 greasy pole climbers who want to preside over the continuing decline of England is 6 in favor of Brexit/5 against – which pretty much mirrors the split in the population at large. Maybe this is an object lesson that 50%+1 type voting is not an effective way to resolve issues on which both sides have very strong views.

And it is sad that the only one who is opposed to both the giant waste of the Sort-of-High Speed 2 rail line to nowhere and the even more wasteful and real-world impossible Net Zero is Ms. Elizabeth Truss – the lady who gained fame by not knowing her Black Sea from her Baltic, which is not exactly confidence-building in a person holding the office of UK Foreign Secretary.

it is even more interesting that, at a time when Jolly Olde England is tottering on the slippery slope to nuclear war with Russia, the aspirants views on that do not even make the list.

Do not count out the possibility that when the English Tory looks at that slate, he may decide that Boris was not so bad after all.

Currently the Best Rated Daily Mail comment on this article: “The British people gave Boris a huge mandate just 2 and a half years ago and a media campaign has unseated him. That’s not democracy.” 3,675 votes in favor, 1,195 against.

One would have to conclude that the fat lady might not yet have sung.

No longer OK. Surprised? Of course, it is also “racist” (Few thing aren’t). Required now is “people with large bodies”. Medically, we are required to say - “obese” is out - “failed dietary efforts”, but you can be sure failure of any kind will not last long. The permutations of euphemisms lends itself to much satire, e.g. large-bodied, non-binary, birthing-person of color, etc…

I just can’t believe how fat young women are now. When I see Facebook posts from my daughter’s school friends, those erstwhile delicate little sprites look like hippos. If it’s a group in their bathing suits they look like manatees. And they don’t seem to mind. They like themselves that way. And the vegans are the fattest.

Partly I’m jealous. I grew up in the country where everybody was fat and I suffered a lot when I went away to school. I agonized over it, went up and down—even though I was never as big as the girls are now. Born too early I reckon……

That reflection of the English psyche, the London Daily Mail, listened to a televised “debate” among the 5 candidates to replace Boris Johnson as Conservative Party leader and Prime Minister and concluded:

"For the avoidance of doubt: The Mail believes this Tory leadership contest should not be happening.

"In our view Boris Johnson was and remains the best choice for Prime Minister, and his political assassination shames the tawdry plotters who wielded the knives.

“The charge sheet against him was largely trivial and grossly exaggerated by his enemies, choreographed by his malicious former aide Dominic Cummings”

Brexit was dead from the get go. And I suspect BoJo is going going gone so that they can get some pure-bred WEF schmuck in there to finish the job so to speak. I guess with the hindsight of 80 years, maybe letting Germany fist that island prison wouldn’t have been such a bad thing after all. I mean Great Britain ended up in the exact same position.

Here is a reminder of the stark choice Britons will face in selecting their next puppet master. 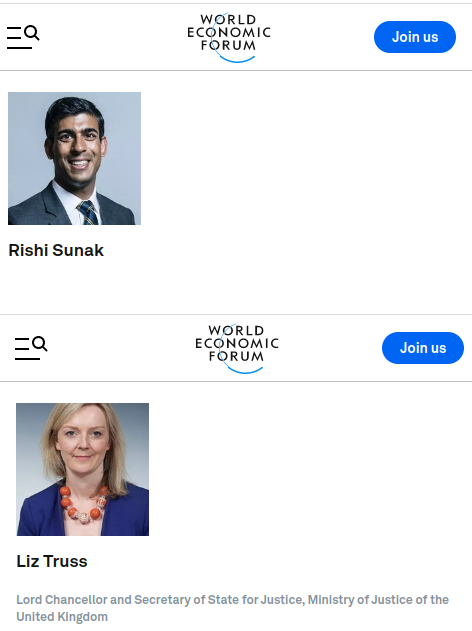 Almost every media outlet likely already has their alternate headlines written such as:

That window into the English soul – the London Daily Mail comments. Top comment as of now:
“Whoever wins, we lose”.
Upvoted by 5,229. Downvoted by 215.

Ms. Truss was the one who did not know her Black Sea from her Baltic, despite being Foreign Secretary at a time when knowledge of the geography around the Ukraine might seem to have been important. Mr. Sunak is the one with a very rich Indian wife who was (legally) avoiding paying tax in the UK. 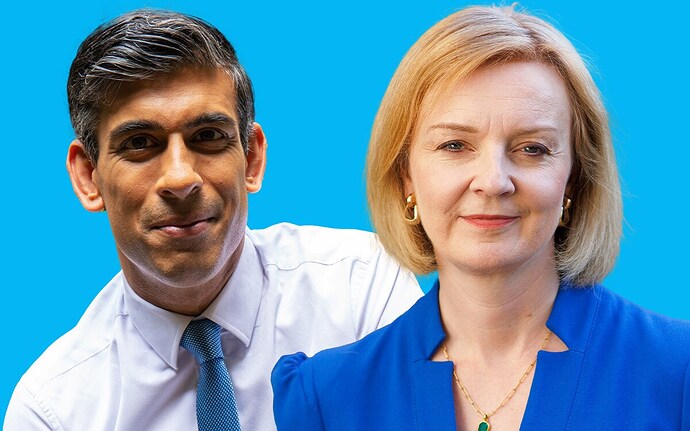 Check the latest Tory leadership odds with our live tracker

There will NOT “always be an England.”. Too bad.

There will NOT “always be an England.”

Adam Smith noted there is a lot of ruin in a nation. It might be an interesting discussion at some point as to when the rot set in to Jolly Olde England.

Someone might make a case that it has fairly much been downhill all the way since Queen Victoria died. Others might assert that it was always unsustainable for a rainy little offshore European island to rule a quarter of the globe – no surprise about the decline. Yet others might argue that England’s temporary time in the sun was a consequence of their having led a global technological revolution, and the end was inevitable once they lost their technological edge and the rest of the world caught up. Perhaps there is a warning in that for us in North America.