Daria Dugina, the daughter of Alexander Dugin who defines Putin’s ideology (along with Ilyin), was assassinated professionally (the security cameras were disabled already two weeks ago). The responsibility was assumed by “National Republican Army”. This is a translation of their manifesto: 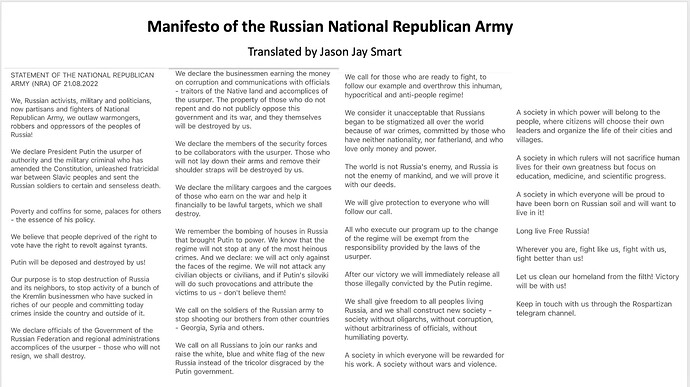 This information was relayed by Duma member Ilya Ponomarev who’s been living in Ukraine since 2016 and was the only Duma member to vote against the annexation of Crimea: 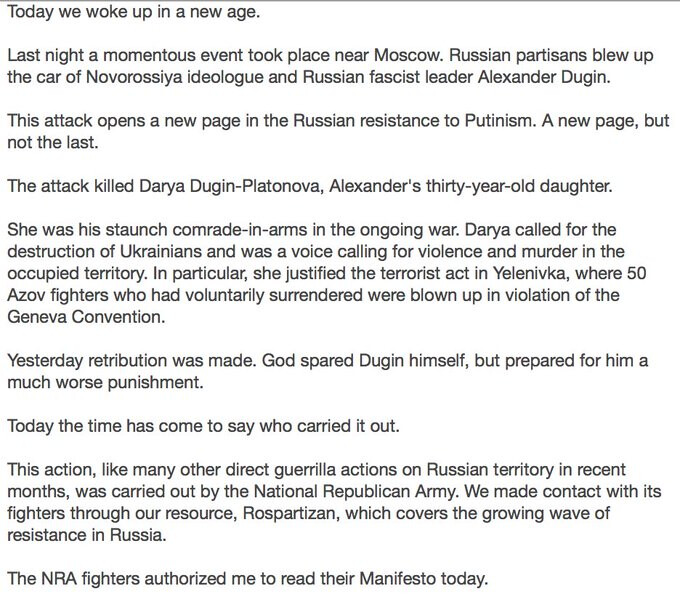 The obvious question is how Russian is the RNRA. We have recently seen some effective Ukrainian intelligence operations within Russia. Russia is presumably capable of responding in kind. Otherwise, we would not have seen Zelenskyy arresting so many “traitors”.

I’m glad you posted this; it led me to read (on Wikipedia, so…

) about Dugin’s book “Foundations of Geopolitics”…Ei-yii-yii, I had no idea. I hafta say, I’m glad they didn’t get him, or we’d be seeing his face on icons being carried through the streets in Moscow.

It is surprising that ISIS and the Gay Liberation Front are not clamoring for the credit for this murder. Standing back, the main observation has to be – a profound lack of competence on the part of the perpetrators: they attacked a very soft target (a minor figure with no serious security) … and botched the job.

Article from Asia Times suggests that (a) the media spin that Dugin is “Putin’s brain” is laughable nonsense, and (b) the lack of competence in execution makes it most likely that this was some independent actor (plutocrat, etc) hiring ordinary Russian criminals for a hit job – and going Low Bid too. Never, ever go Low Bid when hiring a hitman! 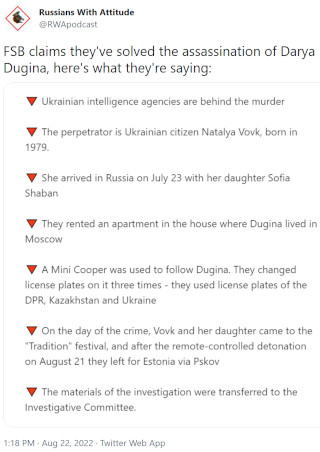 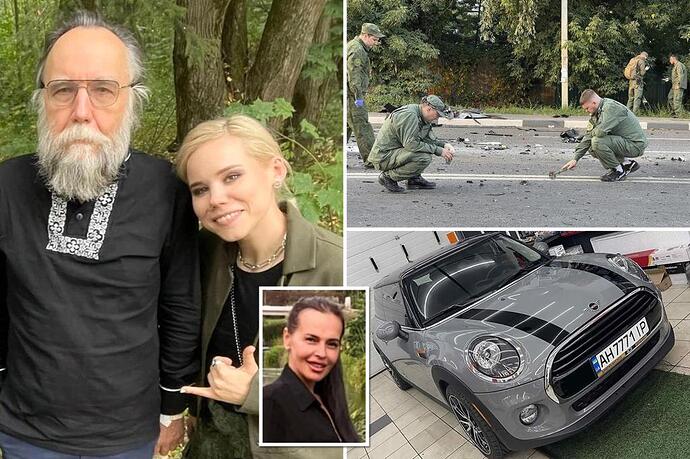 Russia’s counterintelligence agency FSB has identified Darya Dugina’s alleged killer as Natalia Vovk, 43, who was described as as an agent of Ukrainian security service.

At least The Sun did not blame Trump: 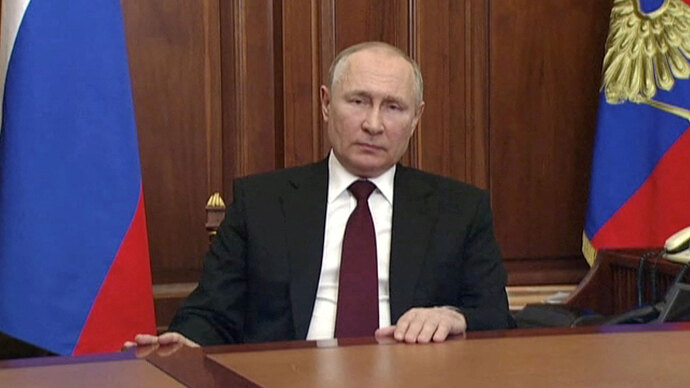 VLADIMIR Putin was most likely the mastermind behind a deadly car bomb that wounded his so-called “spiritual mastermind” and killed his daughter, experts have claimed. Alexander Du…

The problem here is there are a fair few individuals and organizations who might want Dugin and/or his daughter dead.

I would take any FSB claims with the usual pound of salt. It wouldn’t be the first or last time they made shit up.
The Ukrainian govt will deny everything, whether it was them or not, to avoid escalation that might make Russians enthusiastic for full mobilization. This is actualy a reason that it probably isn’t them, operations are blown all the time and they are aware of the political issues doing this could cause. If you are going to risk this kind of backlash, it had better be a worthwhile target.

Edit: it occurs to me that a possibility pointing to Putin is if Putin wants to stir up the population to make full mobilization possible. Killing Dugin could do that and Putin loses nothing he personally cares about. It would be interesting to find out why Dugin changed cars. Against this is Putin has shown no visible interest in full mobilization so far.
Edit2: speeling

Funny reference to the ‘pound of salt’. Here’s a forensic analysis of FSB’s evidence: 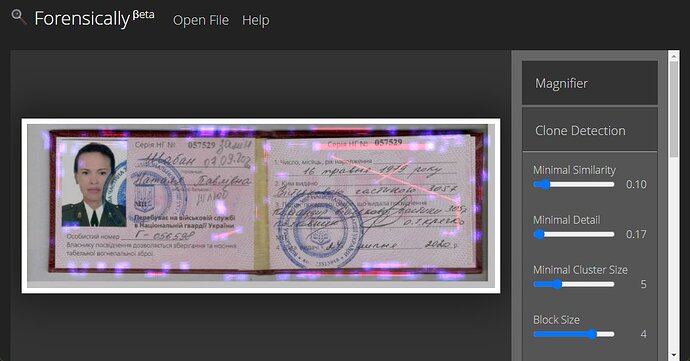 Not a bad summary of a previous “bust” of alleged Nazis. 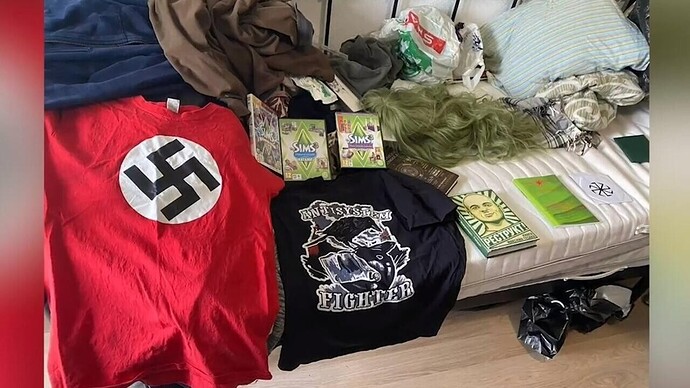 Here's what we know about images of an allegedly foiled neo-Nazi...

On April 25, Russia announced that its intelligence service, the FSB, had prevented an attempted assassination of pro-government TV presenter Vladimir Solovyov by a Russian neo-Nazi group, ordered by Ukrainian…

As if the “purposeful stupidity” strategy was employed by the organization: 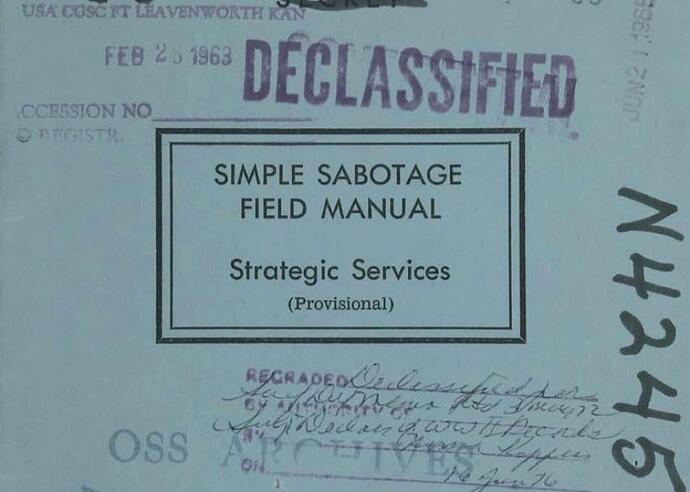 I’ve always admired people who can successfully navigate what I refer to as “Kafka’s Castle,” a term of dread for the many government and corporate agencies that have an inordinate amount of power over our permanent records, and that seem as...

All good points, jdougan. As is typical in the Ukrainian situation, we peons are faced with incomplete information and fairly extreme media bias. Short summary – we don’t know what is going on. Lets simply hope that Ms. Dugina does not become this generations Archduke Franz Ferdinand.

Mark Wauk attaches importance to the claim that the alleged Ukrainian murderer and her 12 year old daughter reportedly did a quick exit stage left to Estonia – where (reportedly) the English government has more military forces than the Estonian government, and London’s MI6 has a lot of sway.

Certainly, UK society and economy are in freefall, and the guys & gals in London are desperately seeking to change the subject – as shown by their astonishingly aggressive language seemingly seeking war with Russia. But the UK can’t do a war – the number of Kiev forces killed so far around the Donbas reportedly exceeds the size of the UK army. Thus they need an incident which will drag the US into an active belligerent role.

The bemused observer wonders – Where is the “Give Peace a Chance” crowd? Why are Our Betters pushing for war-war instead of jaw-jaw?