Elon is raising the ante. Challenging the team to intentionally embrace a course of action indicating commitment. He is taking this to 11. 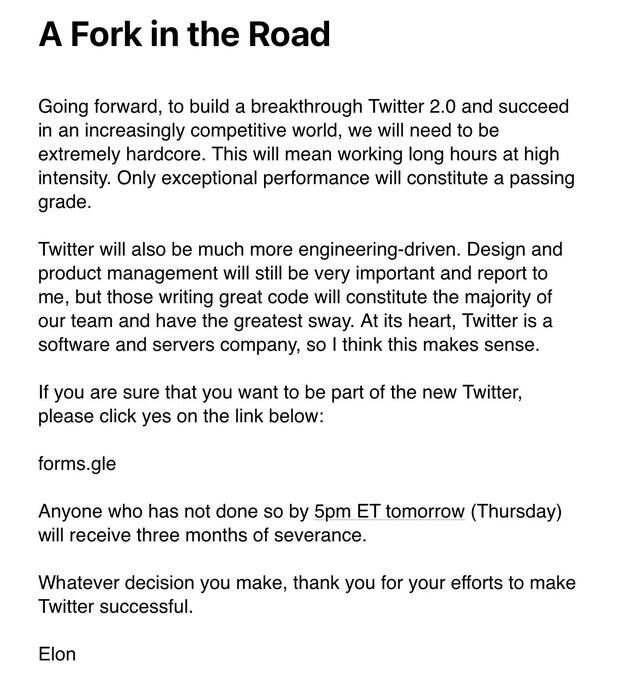 CNN reports on this, and quite frankly, it’s extreme, but I don’t know he’s wrong to take this path.

My take is there has to be an outsized incentive on the other side of that link to make it work, human nature being what it is.

While I am sure there are slackers and inefficient employees at Twitter, the “click thing” does not seem to address this issue, becase:

Watching with real interest how this will end up.

As far as Twitter goes, this is only Phase 2 – Phase 1 having been firing 50% of the staff. Phase 2 will drive out some of the internal bureaucrats who dream of doing to Musk what the Deep State bureaucrats did to President Trump. And then we come to Phase 3 – remaining staff will be required to relocate to somewhere in Texas (probably not Austin) or accept a less attractive package. That will clear out the rest of Twitter’s deadwood.

Back at the dawn of time, I worked for a company based in San Francisco. Eventually, reality forced a transfer out of California. It was amazing how many people refused to transfer. Many San Francisco residents seem to be like Londoners or Parisians – just cannot imagine human life being possible outside their city. But those are probably not the people Musk wants to keep.

Musk’s Twitter will keep ban on Alex Jones. “Trump decision has not yet been made.” 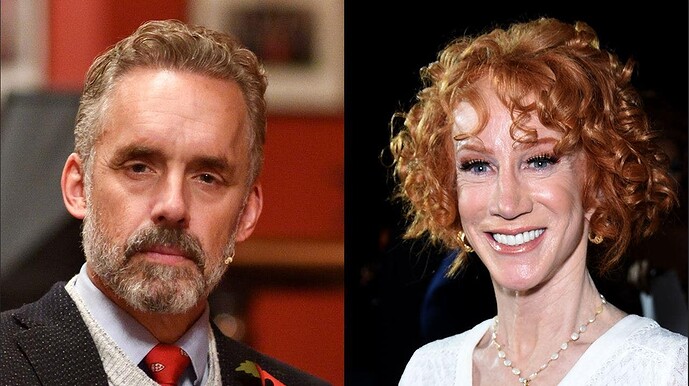 Twitter CEO Elon Musk said Friday that the platform is reinstating the accounts of Jordan Peterson, Kathy Griffin and the Babylon Bee, but not the account of Alex Jones. 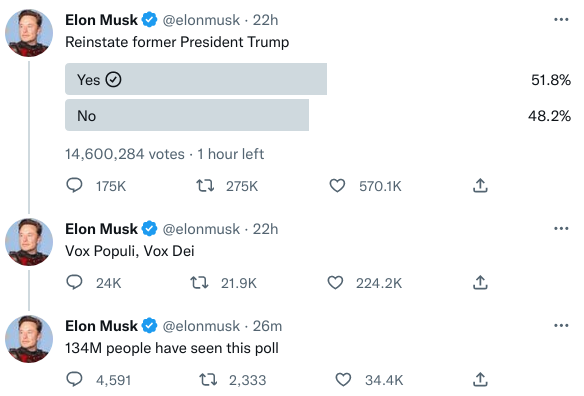 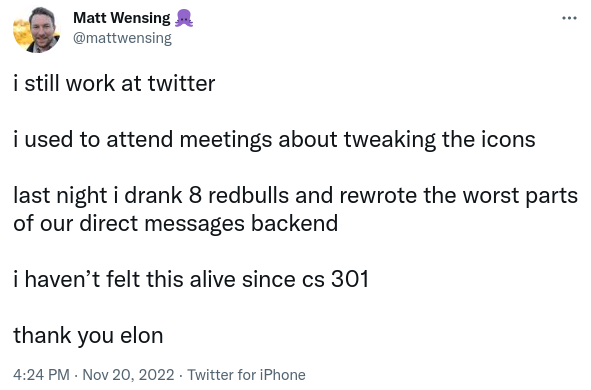 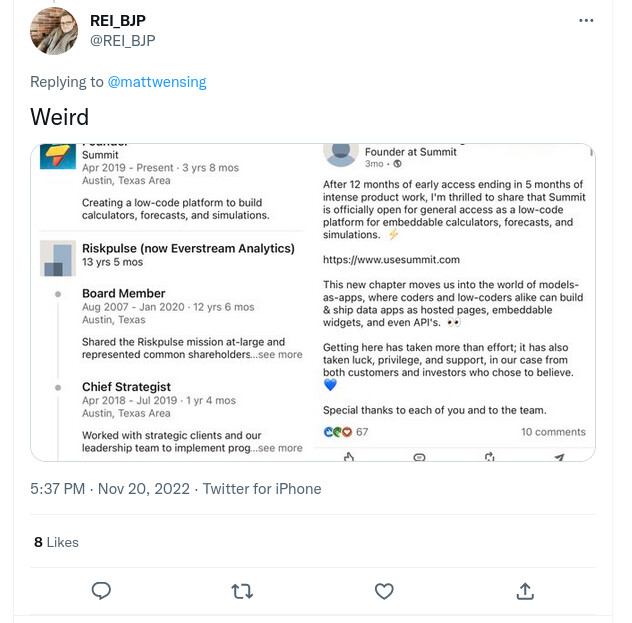 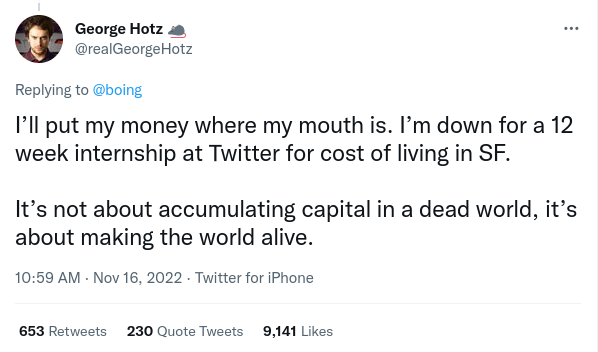 First glimpses of sanity from Twitter/Musk (paywall, but reading-mode+refresh works): 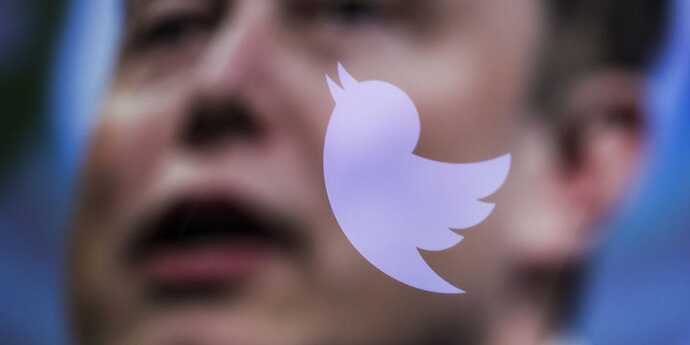 CEO Elon Musk directly oversees Twitter's engineering department where employees are being told to send individual updates of their work.

Twitter’s remaining employees are now expected to keep its CEO Elon Musk up to date on everything they work on each week.

“In order to innovate rapidly on software, it is critical to understand what everyone is working on and who is coding what,” the email said. It was signed by Twitter Engineering, a department Musk himself is leading.

Presented as sensational, but this appears to be normal part of operating any engineering company or department. Surprising if Twitter engineers did not do this in the past. Even if not requested, one should write weekly reports for himself just for record keeping (eg for updating the resume in the future)

Full copy of the new expense policy email at the bottom: 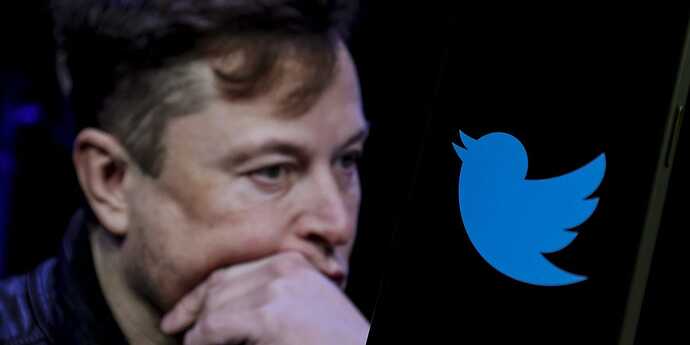 Elon Musk puts an end to some Twitter perks, limits expenses due to company's...

Musk took over Twitter about a month ago and has continuously made changes to its staff and culture.

Redundant, but with a few other details: 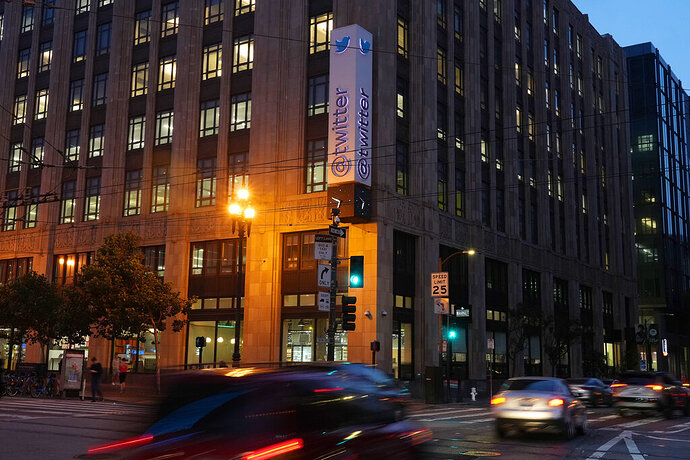 As Elon Musk Cuts Costs at Twitter, Some Bills Are Going Unpaid

Mr. Musk and his advisers are examining all types of expenses at Twitter. Some of the social media company’s vendors have gotten stiffed. 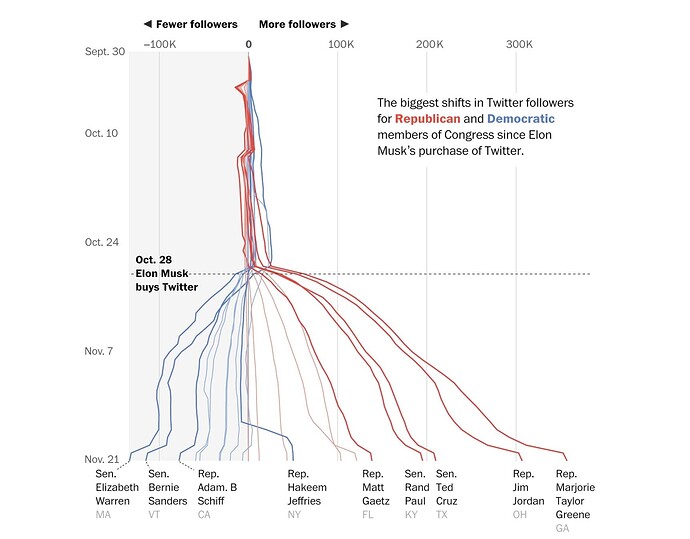 Here is a counterpoint to the “hardcore” angle 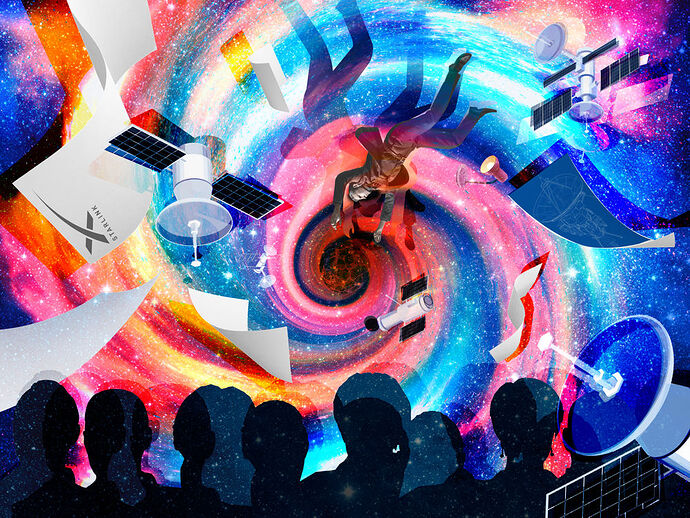 At SpaceX, work was taken away from me in case I “might retire or die.”

I was a “hardcore” Principal Engineer at SpaceX, achieving performance goals and working longer hours than most of my colleagues—yet I saw my work roles gradually transferred to younger engineers who fit the company’s “frat bro” mold. By John...

I always am skeptical when the knives come out. Especially when it involves national politics.

The first question that comes to my mind is how did this person get selected. In this case, I wonder how hard it would be for me to get noticed if I were to write something similar about my former (as of today) employer. Highly unlikely unless someone that is looking for just such a story finds me somehow.

Then early on he writes

“hadn’t confronted the impediments to success that many people face—until I started at SpaceX. But as we move into this new era of wealthy industrialists taking the helm of the largest tech firms”

This language is leftist language. I nearly stopped right there. But I read the whole thing. It could be legit or it could be a guy that has a little too high of an opinion of his own value.

Agree and had the same reaction. But it’s an interesting perspective - if true. I had not heard about this website until now, so it could very well be part of an aggressive PR campaign. Woul;dn’t be the first time (or the last time).

Another tell is the “frat bro” reference. Being somewhat familiar with this guy’s field, his story sounds credible in terms of detail. It’s also possible (likely?) that the ageism angle came out on advice of counsel once he realized that there may be money on the table.

From a business management perspective, the notion that you would want your older star player that single-handedly built a critical area of competence to transition some of his responsibilities and mentor younger engineers strikes me as eminently prudent and reasonable.

From a business management perspective, the notion that you would want your older star player that single-handedly built a critical area of competence to transition some of his responsibilities and mentor younger engineers strikes me as eminently prudent and reasonable.

Yes, but there are different ways to do that:

There is a lot of pep talk among HR and business “leaders” about how important is for the employees to have the sense of ownership, but when it really comes to it, some simply chicken out.

There is probably more to the story, but on the surface, (2) seems dishonest to me.

Intense creative destruction by bright individuals is going on at SpaceX, so the occasional rant is not surprising.

However expect much more as long as Musk is fighting for free speech at Twitter.

You can see here the petition filed in this case.