Wait, Bygone Hapless,has created a “disinformation board” and all we know anout it is that Nina is “head of the board”?
What board? Who are the other board members? Wnere is the legislative authority for its creation and where are the rules which govwrn its activities?
Doesnt there have to be some kinda delegation of authority?
Or is this just like calling some individual a “czar”, like making Hapless the “border czar”? That kinda announcement, i reckon, doesnt require any official rulemaking or legislation; its just a way of deflecting all questions to some bozo who wont answer them, or will lie about them with impunity, like Hapless “We have been to the border”.
I got an A in administrative law, it was my best subject. But i fail to see how this “board” of one can possibly be legal. And thats before we even GET to the obvious 1st Amendment issues.

This is the designated Ministerette of Truth, Nina Jankowicz.

Wnere is the legislative authority for its creation and where are the rules which govwrn its activities?

Maybe we missed the memo. The Rule of Law was replaced with the Rule of Man a while back. There is probably some provision in the CDC procedures which covers this situation. And if there is not already, there soon will be – fully retroactive, and anyone who objects is a DoublePlusUnGood Russian shill who will be appropriately silenced.

First Amendment?? That’s so 18th century! The closing credits for that vid have been streaming since around 1913.

Wnere is the legislative authority for its creation and where are the rules which govern its activities?

I’m sure that there any number of things in those 187 pages which can be twisted to allow the HS to establish this Minitrue board and, if not, well, there’s always “other purposes”. This is what happens when the legislature tuns over the keys to the administrative state.

Hyp, my understanding is that this was a creation of Biden’s security posture memo labeling white nationalists as the—THE—most important national security threat. This memo was released very early in Joey Soft-serves administration.

It’s not clear that DHS has autnority to initiate “domestic influence” programs any more than the State Dept (which is expressly precloded by law from doing so).
But even if it does, what about all the publications and notice periods and hearings and solicitation of public comment which are the trappings of administrative law?thats what i was getting at.
Mary Poopins is evidently going to be the Witchfinder General in charge of some “board”. A board is a tribunal, presumably , like a zoning board or a Board of Commissioners or the myriad state boards of everything form Beauty Culture to Surgery that we have in Pa. They have the power of life and death over the use of our property and over every profession.
So where arevthe regulations giverning appointment of board members, subjecting them to the Administrative Procedure Act, governing the conduct of their hearings and appeals (if any!) from their decisions? Their grant of authority (if any) to impose fines and other penalties?

Wnen Trump was president, we saw executive orders of his overturned because of some jot or tittle of Admin law which was not observed—even when the Obama policy or regulation he was altering hadnt been adopted with all due formalities, either.
Admin law is a vast, sticky net which can be used to defeat any executive decision.
Why does Mary Poopins get to just vault over it? Oh wait: i forgot:she can fly!
And as Travers has her say in the book, when asked how long she will stay:
“Until the wind changes.”

This is unreal… Granted, all of us must have at points in time over a certain part of our lives made inappropriate decisions that viewed through a different lens would come across as at least insensitive if not worse.

But she persisted, here is another “hit”. 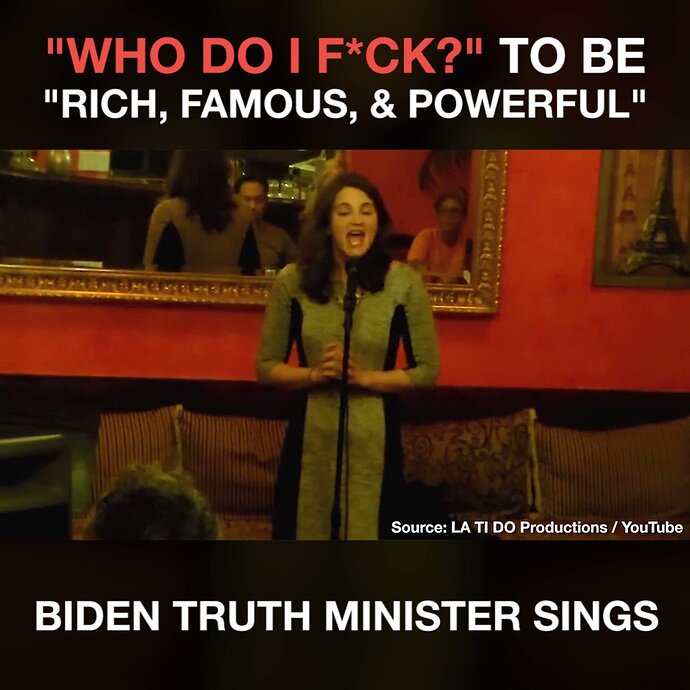 Do you know who the greatest propagator of disinformation in the history of the world is? The U.S. government.