So it appears the East, is unifying around Russia, China, Iran, India, etc. and the West is dividing along Globalist / Libertarian lines.

Therefore, in 2022 we are Truly living in the Wild, Wild West. 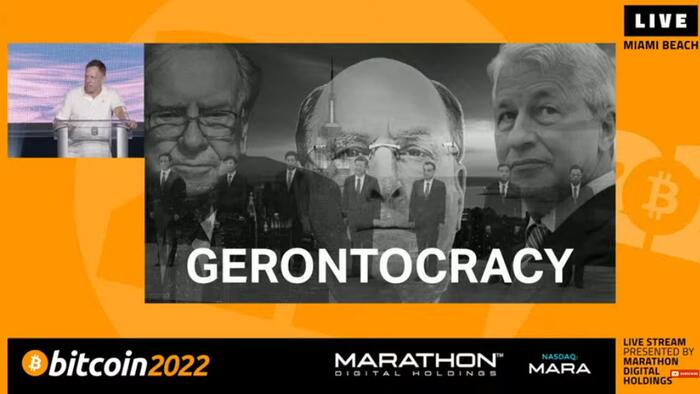 If you don’t want to go through the entire ZeroHedge article to get to the full Peter Thiel keynote, here is the complete speech.

“The sociopathic grandpa from Omaha.”
Love it.

And here I thought that massive money-printing by governments meant that we are at the end of the fiat-money regime.

We have to use some-thing as an exchange for goods – why not bitcoin ???

We have to use some-thing as an exchange for goods – why not bitcoin?

As I interpret what Peter Thiel said, which is consistent with my own view, Bitcoin is not, and need not be, a medium of exchange, any more than gold was a primary medium of exchange in the era of the gold standard. Instead, it serves as a reserve asset with inherent scarcity, independently auditable by anybody who wishes to examine the blockchain, that backs the high-velocity medium of exchange. The latter may be a Bitcoin payment protocol layer such as the Lightning Network, another digital currency that is optimised for low transaction fees, rapid clearance, and support for smart contracts like Ethereum, or something which has yet to emerge—that is a piece of the puzzle which is not yet in place. But the payment layer, to be credible, will be backed 100% by Bitcoin reserve assets, and in a free market with the kind of competition among currencies envisioned by Milton Friedman, the sound money will win over funny money because people don’t like having their pockets picked.

It’s no coincidence that the emergence of un-backed, government fiat currencies has always been accompanied by legal tender laws which force people to use them instead of the currency of their choice. Government funny money and legal tender laws are now in the position of video rental stores shortly after streaming services began to creep up into the middle single digit percentage of market share: it was all over, but they didn’t yet know it and had no plan or ability to respond.

Once a new technology rolls over you, if you’re not part of the steamroller, you’re part of the road.
— Stewart Brand

Digital currencies depend on reliable stable 24/7 electric supply – which is something the Beautiful People are working diligently to undermine. And they will get round to undermining the reliability of the required internet access also eventually. Give those guys a break! There is only so much an activist can do in a day!

As a society, we will be going back to barter – the inefficient exchange of real goods & services for other real goods & services. This is going to be a wonderful enema for our current situation. What real goods are producers going to be willing to barter in exchange for the services provided by an Affirmative Action Outreach Coordinator? Once the wasteful overhead has been flushed out of the system, then we will get back to designing an efficient stable currency.

The long-term future is bright. But first we have to get through the storm.

Digital currencies depend on reliable stable 24/7 electric supply – which is something the Beautiful People are working diligently to undermine.

Digital currencies require electricity at a majority of transaction clearing nodes (“miners”), but there are hundreds of thousands of active miners distributed all around the world, and only a consensus number are required to clear transactions. A world-wide power failure would take down transaction clearing, but would also shut down everything else (including all other electronic payment systems), so a Bitcoin outage would probably be one of the least of the problems.

Local power failures obviously affect the ability to get to the Bitcoin network, but the deployment of satellite constellations with massively redundant connections means that as long as you have a battery backed up ground terminal, you can probably get to the Internet when the power is off. And, as is the case in locations where power is unreliable now, those with the need will install backup power systems with solar panels where appropriate to compensate.

But all of this is something that affects rapid transaction processing, which is not the main function of Bitcoin as a reserve asset. Whatever transaction system comes to be widely used, it will no more vulnerable to local power outages than a Visa point of sale payment terminal and probably less vulnerable to data centre outages since clearance will through a widely distributed network.

After all, the main reserves now held by central and money centre banks: government bonds in the major trading currencies and gold, are only traded during limited business hours on weekdays, and that doesn’t affect the clearing of retail transactions.

My wife counted the uhs in the speech --but all I heard was a clear description of the economic path we, in the Wild West, are all on. I see the light thanks to Thiel & Walker!

We will use our God granted resources – the lights will not go out in Texas!

the lights will not go out in Texas!

Sorry, don’t mean to sound snarky. I would guess that West Texas will be one of the best places to be in the Western world when things go pear-shaped. Some oil, some water, and lots & lots of space.

the main function of Bitcoin as a reserve asset.

Zoltan Pozar has been quoted recently with the suggestion that physical commodities are likely to gain prominence as reserve assets, in place of paper/electronic IOUs. It seems quite plausible that people who prefer gold bars to fiat could easily progress to preferring a useable stock tank of oil or a full grain elevator to a gold bar – or a symbol on a computer system. Time will tell!

Serious question – the US/UK recently stole Russia’s paper/electronic reserve assets within their control. Could they have done something similar if Russia had held those assets as bitcoin?

Could they have done something similar if Russia had held those assets as bitcoin?

As long as Russia held their Bitcoin reserves in addresses to which they had exclusive and secure custody of the private keys (and they would be utterly insane to do anything else) there would be no way their assets could be stolen. The Bitcoin network will not process a spend transaction which is not signed with the secret key corresponding to the sending address of the transaction. Due to the manner in which the one-way hashing function is used to generate the public address from the secret key, a validator processing the transaction can verify the submitter of the transaction possesses the correct secret key without knowing its contents.

A validator who fraudulently certified the transaction and published it to the blockchain would immediately be identified by any of the hundreds of thousands of other full nodes who independently verify the correctness of each block they receive and flag the block as invalid and the miner who published it as a rogue. The block would never receive the required number of confirmations and be rejected as fraudulent.

Processing a spend transaction without a valid private key would require co-opting more than half of the full node operators on the network, and there is no plausible way to do that without a radical restructuring of the architecture of the network which, itself, would require a hard fork which was adopted by the overwhelming majority of the miners and node operators.

Whether it would be possible to freeze transactions from addresses identified as Russian reserve addresses is a more complicated question. First, they would have to be identified as such. If, as is considered best practice with Bitcoin, a new address was used for every incoming transaction and the funds were not further consolidated, it would require all senders to identify the receiver as Russia. Assuming the reserve addresses could be identified, Bitcoin to legacy currency exchanges who were cooperative or could be coerced could refuse to perform exchanges for funds from identified addresses and seize the Bitcoin sent to them. This appears to be the approach being taken with the proceeds of the US$ 625 million Ronin heist I wrote about here on 2022-03-30.

One could imagine a scheme where validators would reject (refuse to publish on the blockchain) outbound transfers from blocked addresses, but that would require a mechanism which does not exist and would require cooperation of most validators to put into place. Notably, the address which received the purloined funds from the heist continues to transfer funds out without impediment.

there would be no way their assets could be stolen

Thanks for that explanation. It certainly makes bitcoin seem like something that any country which might one day find itself on the wrong side of the US, UK, Switzerland should look into seriously.

Stunning indeed. His description of how an IPO further empowers the state is a most succinct explanation of postmodern fascism - the “new and improved” merger of the state and its corporate feifs. This combination allows the state to avoid the few remaining effective Constitutional limits on state power via the all-but-inescapable monopolies which have metastasized into every corner of our lives. What we may know, to whom we may speak (and even our use of language - pronouns today, paragraphs tomorrow), and what we may think (how we are in-formed), is under the plausibly-deniable control of malignant state.

The pervasive pantomime of these two entities - the state and the corporation - combines, as Thiel describes, in ESG. This unholy, anti-social, and anti-humanist combination must be destroyed if there is to be a decent future for humanity. Bitcoin is a part of that undertaking, along with return to a P2P internet.

His description of how an IPO further empowers the state is a most succinct explanation of postmodern fascism - the “new and improved” merger of the state and its corporate feifs.

One of the most stunning things I learned in the Initial Public Offering process in 1985 was the “quiet period” and the constraints it placed upon free speech by corporate officers, directors, and the company itself.

“Free speech”? Oh, you must have been thinking of frozen peach ice cream or something? Everything you say which might be interpreted as enabling some shill fronting for a contingency fee lawyer in San Diego filing a shareholder suit if your stock ever declines one penny puts you in the bull’s eye of personal liability.

In fact, at least in the 1980s when I was going through it, this amounted to a close to total gag order on companies going public. Everybody, including us, meekly complied as I recalled. I don’t think there was anybody with the courage or recklessness to “do an Elon” and just poke the eagle in the eye and say, “And what are you going to do about it?” I wish I had.

@BTC_Archive
The Miami bull's balls were removed on orders from TradeStation, the trading platform that commissioned it, to avoid "feeding the gendered stereotypes about finance". 🤡🤡🤡🤡🤡🤡🤡🤡🤡 🤡🤡🤡🤡🤡🤡🤡🤡🤡 “I had designed some huge, mechanical balls, said the artist.” 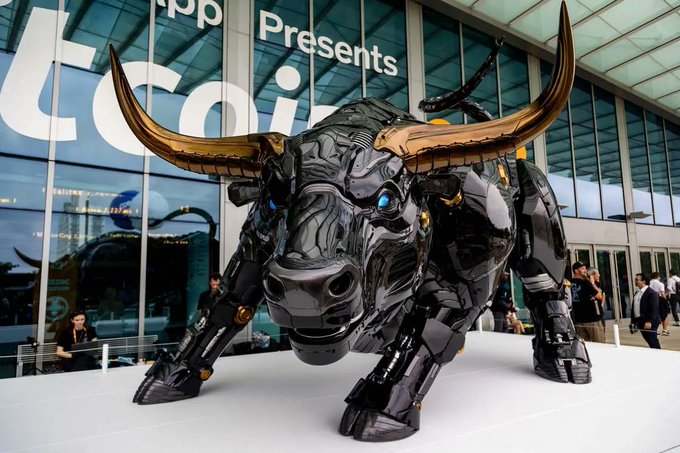 Here is CoinDesk on “The Meaning of Miami’s Castrated Bitcoin Bull”.

Almost immediately after it was unveiled outside the Miami Beach Convention Center on Monday, kicking off the first day of the global Bitcoin 2022 conference, observers noted the robotic totem with hooves and horns lacked that one crucial anatomical detail. Its creator, Furio Tedeschi, hadn’t intended for the bull to be a steer.

“I’d designed some huge, mechanical balls,” Tedeschi, who has done art design for the “Transformers” film series, from which his latest work draws inspiration, told Forbes. Apparently, TradeStation, the Florida-based trading platform that commissioned the mechanical statue removed those assets to avoid feeding the gendered stereotypes about finance.