Following a hydrogen leak at the tail service mast attachment, filling with liquid hydrogen has been stopped at the 5% level and liquid oxygen loading has also stopped. The countdown clock has been reset to the 10 minute mark and held there.

They will test chilling of the propellant load lines for the second stage but not load any propellant onto the stage.

There will be no test of the countdown past the 10 minute mark as was previously planned. Thus there will be no tests of all of the sequence of operations which lead up to a normal launch, including such items as starting the hydraulic systems of the solid rocket boosters.

No statement has been made as to whether this incomplete test will be considered sufficient or whether they will have to try again.

@NASAGroundSys
Teams have confirmed they have satisfied the test objectives for the ICPS LH2 chilldown and after gathering additional data, will work to drain propellant from the rocket. They will inspect the TSMU umbilical connection, review data, and establish a go-forward plan.-JP

So, that’s basically it for today.

NASA will hold a media teleconference on 2022-04-15 at 19:00 UTC to “Discuss Initial Findings from Artemis Moon Mission Modified Test” held yesterday and terminated after discovery of a liquid hydrogen leak on the tail service mast umbilical that connects the launch platform to the first stage of the rocket.

The conference (audio only) will be streamed on NASA Live.

NASA has announced a new teleconference, “NASA to Discuss Status of Artemis I Moon Mission” to start at 19:00 UTC on 2022-04-18. The call will be streamed on NASA Live, and I will add a link to the player when it is posted. As part of the announcement, NASA dropped this gem:

Due to upgrades required at an off-site supplier of gaseous nitrogen used for the test, NASA will take advantage of the opportunity to roll SLS and Orion back to the Vehicle Assembly Building to replace a faulty upper stage check valve and a small leak on the tail service mast umbilical. During that time, the agency also will review schedules and options to demonstrate propellant loading operations ahead of launch.

Decoding this, liquid nitrogen supplier Air Liquide, whose equipment failed on each of the previous wet dress rehearsal (WDR) tests, is going to update their infrastructure in the hope of remedying this problem. This will take sufficiently long that NASA has decided to roll the SLS stack back to the Vehicle Assembly Building, repair the defective valve in the upper stage and the hydrogen leak in the tail service mast, and then decide how to proceed from there. Whether they’ll roll out for another series of WDR attempts, followed by a roll back and preparation for launch, or prepare for a launch attempt and then try the WDR on that configuration has yet to be announced and will certainly be asked at the media conference. In any case, the June launch window is now beginning to look increasingly dubious. 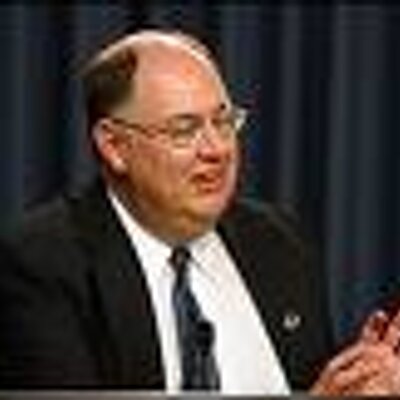 @waynehale
Re: #Artemis1 WDR. Anybody in the business knew to expect problems in the ground system that would require fixing. My personal guess was it would take about 5 attempts to get it right. No surprise and a successful loading will no doubt occur in the next few weeks 1/2

@waynehale
Re: #Artemis1 WDR: I expect - with no real inside knowledge - the first launch attempt will come this summer after all the issues are worked out. The reason this looks so bad is a failure to explain the situation clearly and provide realistic expectations to the public. 2/3

@waynehale
Re: #Artemis1 WDR: as one with great love and regard for my old colleagues, I trust them to do great engineering and have a successful flight. I hope they will learn that it is better to be transparent and realistic with the taxpayers who are, after all, paying for it. 3/3
3 Likes
johnwalker 18 April 2022 18:57 #45

On 2022-05-27, NASA held a media teleconference, “Artemis l Wet Dress Rehearsal Status Update”, about work done since returning SLS and Orion to the vehicle assembly building and plans for the next attempt to fuel the rocket. During the presentation it was announced that, Florida thunderstorms permitting, plans are to roll the stack back to the pad on June 5th, aiming for the next wet dress rehearsal attempt on June 19. If they are successful with the fueling test this time, they expect to set the launch attempt for the “August time frame”.

At this time (2022-06-06 11:54 UTC) NASA is rolling out the Space Launch System (SLS) rocket for the Moontrash Artemis 1 mission for its next attempt to fully fuel the main and upper stages and count down to just before engine start (“Wet Dress Rehearsal”). This is planned, if all goes well hooking up the rocket to the launch pad services, on June 19. If and when they finally accomplish the countdown demonstration, they will roll the stack back to the Vehicle Assembly Building once more to prepare it for flight in the “August time frame”.

@SpaceflightNow
NASA’s Artemis 1 moon rocket was lowered onto pedestals at pad 39B at 10:47am EDT (1447 GMT), officially completing the launcher’s more than 10-and-a-half hour journey from the Vehicle Assembly Building. https://t.co/WrjH57VeTR 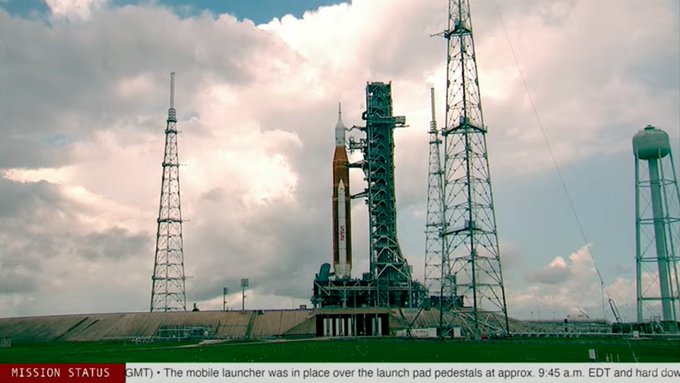 Every time I see that thing, I sense doom.

Take a look at the SLS sitting on the launch pad in comment # 47. The box on which the rocket is sitting and the tower at the right to which it is connected is called the “mobile launcher”. The rocket is assembled on the mobile launcher in the Vehicle Assembly Building, then the launcher and rocket are rolled out to the pad by the crawler-transporter. During the Apollo era, three mobile launchers were used. These were subsequently converted for use with the Space Shuttle.

A new mobile launcher was built for the SLS program, ML-1, whose cost was originally estimated at US$ 122 million. By 2020, the NASA Inspector General estimated that construction had cost US$ 927 million and was three years behind schedule. ML-1 is the unit that appears in the picture above. But ML-1 is designed to service only the Block I SLS, like the one to which it is attached. This is an interim design, which according to current plans, only three of which will be built. The SLS is then supposed to transition to the Block IB configuration, which will have the ability to support sustained lunar operations via the Lunar Gateway.

Block IB, however, will require a mobile launcher which is taller, stronger, and configured with umbilical arms to support the new Exploration Upper Stage of that configuration 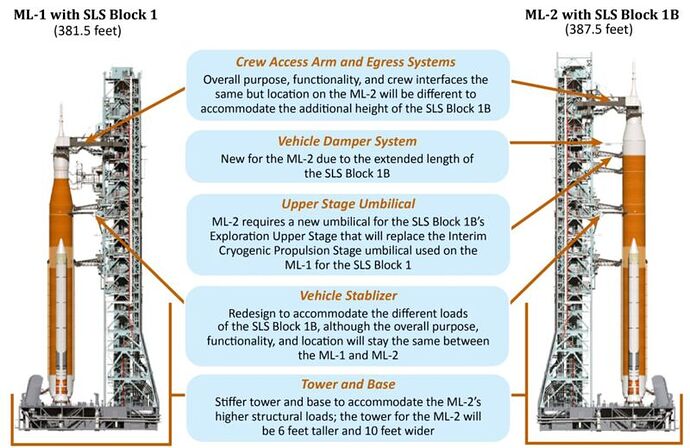 When Bechtel won the contract for this mobile launcher, named ML-2, it was supposed to cost $383 million. But according to a scathing new report by NASA’s inspector general, the project is already running years behind schedule, the launcher weighs too much, and the whole thing is hundreds of millions of dollars over budget. The new cost estimate for the project is $960 million.

“We found Bechtel’s poor performance is the main reason for the significant projected cost increases,” the report, signed by Inspector General Paul Martin, states. The report finds that Bechtel underestimated the project’s scope and complexity. In turn, Bechtel officials sought to blame some of the project’s cost increases on the COVID-19 pandemic.

As of this spring, NASA had already obligated $435.6 million to the project. However, despite these ample funding awards, as of May, design work for the massive launch tower was still incomplete, Martin reports. In fact, Bechtel now does not expect construction to begin until the end of calendar year 2022 at the earliest.

So, in short, the project has already overrun its original cost estimate by U$ 52.6 million and the contractor has yet to begin, you know, actually building the thing.

Who comes up with the cost estimates for these designs ? Wally from Dilbert?

Bechtel was a low public profile organization which just got on with the job. I wonder what went wrong? Just guessing here – but it would not be surprising if part of the reason for the project over-runs and delays was changes in the design scope from NASA after the contract was signed.

Bechtel was a low public profile organization which just got on with the job. I wonder what went wrong? Just guessing here – but it would not be surprising if part of the reason for the project over-runs and delays was changes in the design scope from NASA after the contract was signed.

I suspect this has a lot to do with what happened. A typical Bechtel project back in their heyday was “Build us a dam there” or “We need a new port here”, and they would go off, design it, hire the people to build it and get it done. Apparently, as is often the case, NASA let this contract with all kinds of details unspecified and then kept coming back with changes constantly during the design definition phase. This certainly happened with the other components of SLS, so it wouldn’t be surprising to see it here.

NASA has blamed it on cost-plus contracting, but any engineering company would be crazy to accept a fixed price contract when the requirements for what is to be built have not been specified at the time of the award.

With the next attempt at the Wet Dress Rehearsal propellant loading test scheduled for on Monday, 2022-06-20, NASA held a media teleconference today, 2022-06-15, to discuss work performed to date and plans for the test. This is an audio-only recording of the call.

NASA is proceeding with the attempt to load cryogenic propellants on the SLS today, 2022-06-20. Here is a live stream with occasional commentary from the NASA Media Channel.

Continuing a rich SLS tradition, the countdown was delayed due to a failure in gaseous nitrogen purge system.

@NASAGroundSys
UPDATE: A valve for the redundant gaseous nitrogen (GN2) line has now been repaired. The launch team is assessing next steps and continue to be in an extended hold. Stay tuned to https://t.co/6CWuCVIE53 for ongoing updates.

They say it’s "all better now” and the countdown will resume “real soon”.

They say it’s "all better now” and the countdown will resume “real soon”.

And when have we heard that before?

@NASAGroundSys
UPDATE: We have now entered chilldown of the @NASA_SLS liquid hydrogen transfer line. 🚀 Check out our clickable rocket to explore it's tanks here: https://t.co/EVroYXvGoW

Perhaps it was speech-to-text on an iPhone

@NASAGroundSys
UPDATE: Liquid oxygen upper stage is now in stop flow. The team has discovered a hydrogen leak at a quick disconnect for the core stage and are currently working to understand the situation. Stay tuned to https://t.co/6CWuCVIE53 for ongoing updates.

@NASAGroundSys
Upper stage liquid hydrogen is now full. The team is still troubleshooting the leak at the core stage quick disconnect. Team is working to manually adjust the LOX pressure in upper stage to get back into tanking. Plan for small fire at pad is to allow it to burn out.