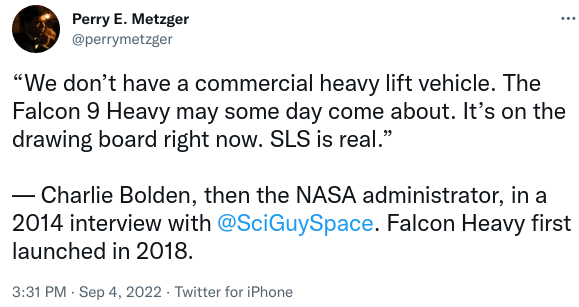 Two hours and 45 minutes before the scheduled launch of Apollo 11 on 1969-07-16, a liquid hydrogen leak was detected in the replenish line to the Saturn V S-IVB third stage. This is how the NASA of 1969 dealt with the problem, as recounted by Stephen Coester, then a 28 year old engineer on the project in “Launching Apollo 11 to the Moon” [PDF].

Long forgotten is the fact that the Apollo 11 launch was almost scrubbed on July 16. I was assigned to the launch console (C4HU) that maintained 100% liquid hydrogen level in the Saturn third stage which was used to propel the astronauts from earth orbit to the moon. Late in the propellant loading as we were beginning the S-IVB replenish operation, a large liquid hydrogen leak at -423 degrees occurred on the third stage replenish valve on the 200 foot level of the launch umbilical tower. Loading was terminated and the lines drained to prevent a fire or explosion and a Red Crew went to the Pad to fix the problem.

Using troubleshooting that I developed the Red Crew torqued packing and flange bolts and cycled the valve. then we resumed liquid hydrogen flow, but were unsuccessful in stopping the leak which prevented maintaining the 100% fuel level in the Saturn third stage. Without a full tank of liquid hydrogen there would be no launch. Finally the leak was isolated by freezing the valve by pouring water over it, but that made the critical valve inoperable. We then developed a way to use the large main fill valve which was not intended for that purpose to maintain the level and the launch countdown could finally continue. For several hours another engineer (CPH1) manually cycled the valve from his console as I reported the tank level as it fell below or exceeded 100%.

Here is a clip from the 46 minute video of Apollo 11 launch preparations showing Red Team technicians working on the leaking valve next to the fully fueled Saturn V.

The only criterion in which the Artemis I rocket is “biggest” is in the diameter of the lunar capsule:

They lie about everything, even if when doesn’t matter.

In a press release on 2022-09-06, “Teams Continue to Review Options for Next Attempt, Prepare to Replace Seal”, NASA announced:

After standing down on the Artemis I launch attempt Saturday, Sept. 3 due to a hydrogen leak, teams have decided to replace the seal on an interface, called the quick disconnect, between the liquid hydrogen fuel feed line [PDF] on the mobile launcher and the Space Launch System (SLS) rocket while at the launch pad.

Performing the work at the pad requires technicians to set up an enclosure around the work area to protect the hardware from the weather and other environmental conditions, but enables engineers to test the repair under cryogenic, or supercold, conditions. Performing the work at the pad also allows teams to gather as much data as possible to understand the cause of the issue. Teams may return the rocket to the Vehicle Assembly Building (VAB) to perform additional work that does not require use of the cryogenic facilities available only at the pad.

At this point, no plans or schedule has been made to roll the vehicle back to the VAB.

To meet the current requirement by the Eastern Range for the certification on the flight termination system, NASA would need to roll the rocket and spacecraft back to the VAB before the next launch attempt to reset the system’s batteries.

On 2022-09-08 NASA held a Media Teleconference on Artemis I Launch Status. Participants were:

NASA has reserved 2022-09-23 and 2022-09-27 on the range as possible launch dates if the hydrogen leaks are repaired and the range approves a request to extend the battery re-test requirement for the flight termination system to avoid the need for a roll back to the Vehicle Assembly Building. If a roll-back is required, they will perform a tanking test at the pad to verify the leak repairs before leaving the pad.

Next step before killing SLS will be to blame Trump for SLS. 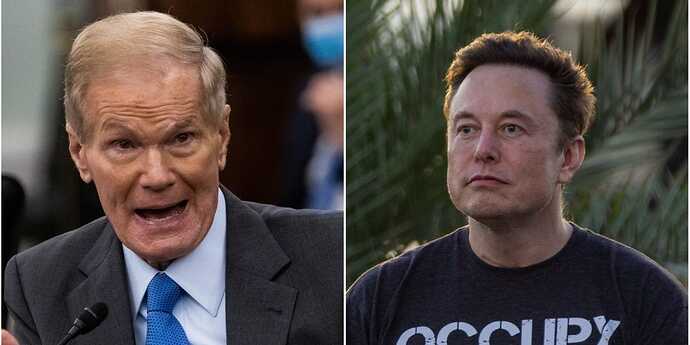 NASA chief says everyone 'poo-pooed' Elon Musk's SpaceX when it was pitted...

SpaceX has had many successful launches, compared with Boeing, which hasn't flown its Starliner rocket yet, NASA's administrator told Newsweek.

This is particularly rich, because as former NASA deputy administrator Lori Garver (an Obama Democrat) documents extensively in her book Escaping Gravity, Nelson was one of the most stalwart opponents, perhaps second only to Alabama’s Richard Shelby, of NASA’s Commercial Cargo and Commercial Crew programs, repeatedly cutting their funding in Congress to divert money to SLS, which he saw as creating more jobs in Florida (and doubtless campaign contributions from its contractors). When he rails about “critics dismiss[ing]” SpaceX, he neglects to note that he was among the most prominent, with on-the record statements in committee hearings disparaging SpaceX and NASA’s attempts to procure commercial launch services, despite that being the official policy of the Obama administration, of his own party. 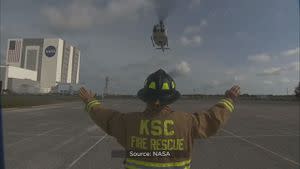 A dozen firefighters are expected to lose their job at the Kennedy Space Center.

NASA is looking to close Station 3, which is the one closest to the Artemis I launchpad. NASA says the station hasn’t responded to a call in years. 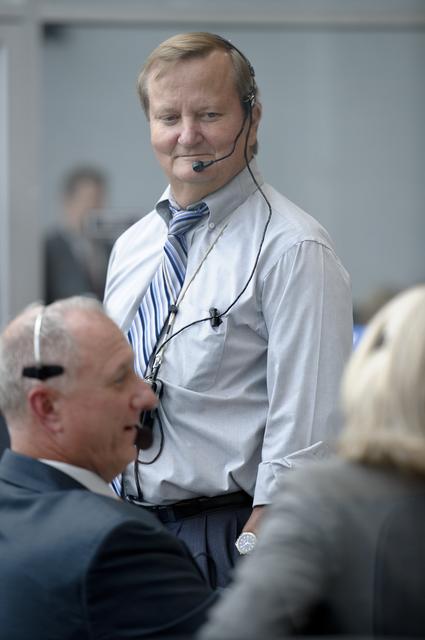 Mike Leinbach, the final NASA Space Shuttle Launch Director, shares his thoughts about the finicky fuel and how the Artemis team is managing with the Space Launch System. 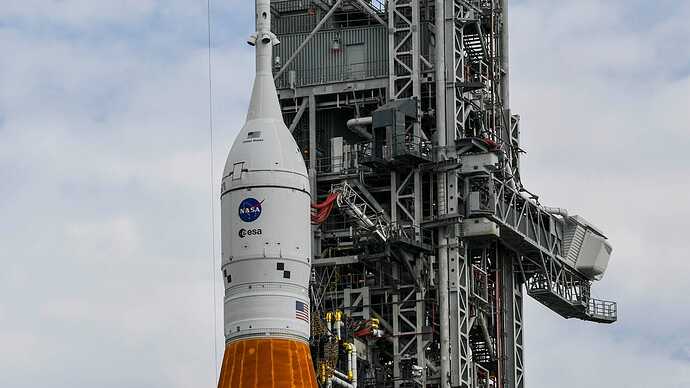 NASA finds damage on leaky Artemis I hydrogen seal, targeting this week for...

NASA teams found a\u00a0potential culprit that scrubbed the Artemis I moon mission's last attempt, setting the stage for a fueling test this week.

On 2022-09-19, NASA held a media teleconference to discuss status prior to the fuelling demonstration test planned to be held on 2022-09-21 which, if successful, will allow proceeding with a launch attempt on 2022-09-27 if a waiver can be obtained from the Space Force to avoid re-testing the flight termination system batteries, which would require a roll-back to the Vehicle Assembly Building. This is an audio-only recording.

Is there an office pool running on SLS ever taking off?

Here is a live stream covering the Artemis I cryogenic demonstration test. This differs from a wet dress rehearsal in that solid rocket boosters and Orion spacecraft will not be powered up—only propellant loading will be performed.

Hydrogen flow has been stopped after the appearance of a leak, just like the last time. Leaking hydrogen was detected at a concentration of 7%, almost double the safety standard of 4%. This is on the 8 inch hydrogen feed line, where the connection to the tail service mast was “repaired” before this test began.

They are now going to try letting the line warm up for about half an hour and re-chill in the hope the connection will re-seat. This is what they tried on the last attempt, which didn’t work then.

Update: NASA Public Affairs confirms that the leak appeared at the moment hydrogen fill transitioned from slow fill to fast fill, which was precisely when the leak occurred on the last attempt. (2022-09-21 14:45 UTC)

After the warming up and chilling down again, they have resumed hydrogen fast fill and there is as yet no indication of a leak this time.

The test is now concluded, including pressurising the first and second stage propellant tanks to flight pressure. During the tests, a second, unrelated hydrogen leak was detected on the first stage 4 inch hydrogen replenish line on the quick disconnect umbilical. This leak caused the hydrogen level to rise to around 5%, which would have caused a cut-off under normal mission rules for a launch countdown, but for this test they decided to go ahead.

We’ll probably have to wait until a post-test news conference to learn whether the bumpy results from this test are sufficient to go ahead with a launch attempt on the 27th.

On 2012-09-23 NASA held an Artemis I Post-Demonstration Test Status Update media conference. The major take-aways were that they have received a waiver from the Space Force range safety people to launch on either 2022-09-27 or the backup date of 2022-10-02 without rolling back to the Vehicle Assembly Building (VAB) to inspect and re-certify the range safety system batteries, and that NASA considers the results of the cryogenic loading test sufficient to proceed with a launch attempt as soon as the first of those dates. However, if a tropical storm now developing in the Atlantic is seen as likely heading for the Cape, they will roll back to the VAB to protect the stack. A decision on this is expected no later than the morning of 2023-09-24 Florida time. Late on the 23rd, the crawler-transporter was moved toward the launch pad area to be in position should a roll back be ordered.

This is an audio-only recording of the media call. 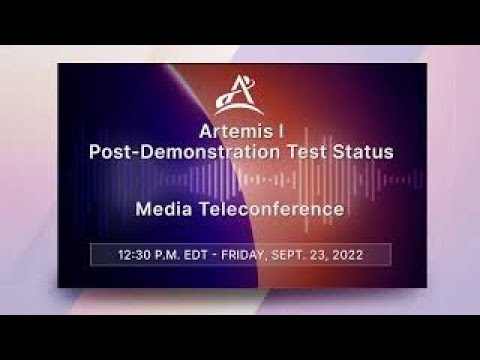 NASA is foregoing a launch opportunity Tuesday, Sept. 27, and preparing for rollback, while continuing to watch the weather forecast associated with Tropical Storm Ian. During a meeting Saturday morning, teams decided to stand down on preparing for the Tuesday launch date to allow them to configure systems for rolling back the Space Launch System rocket and Orion spacecraft to the Vehicle Assembly Building. Engineers deferred a final decision about the roll to Sunday, Sept. 25, to allow for additional data gathering and analysis. If Artemis I managers elect to roll back, it would begin late Sunday night or early Monday morning.

The agency is taking a step-wise approach to its decision making process to allow the agency to protect its employees by completing a safe roll in time for them to address the needs of their families while also protecting for the option to press ahead with another launch opportunity in the current window if weather predictions improve. NASA continues to rely on the most up to date information provided by the National Oceanic and Atmospheric Administration, U.S. Space Force, and the National Hurricane Center. 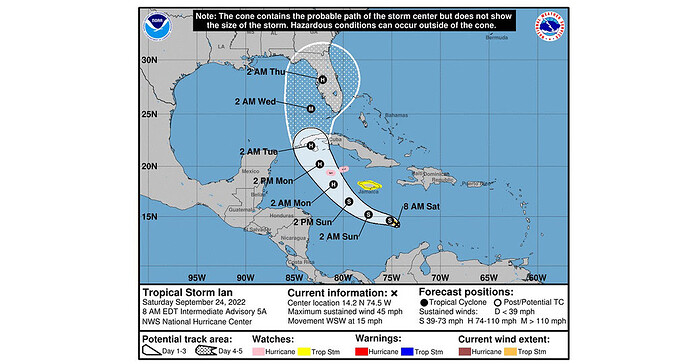