The PredictIt prediction market has opened markets on the nominees of the Democrat and Republican parties for U.S. president in 2024 as well as the eventual winner of the general election. Current standings (2021-10-20 at 19:47 UTC) are:

The way prediction markets work is that you buy shares in Yes or No for your choice at a price of US$1 times the percentage offered in the market. When the event happens and the outcome is known, shares in the correct prediction pay off at par while all others are worthless. So, for example, you could buy 100 shares of Trump president in 2024 for US$ 29 and if he wins the election, you collect US$ 100.

I found the prediction of Biden as the Democrat nominee surprisingly low.

I found the prediction of Biden as the Democrat nominee surprisingly low.

You have to price in life expectancy (another aneurysm or breakthrough COVID) plus mental decline.

I have a somewhat practiced physician’s eye, imperfect as it may be. In my experience, Biden’s mien definitely does not comport with a life expectancy sufficient for another term. When he has been less carefully resurrected - sorry, made up, he doesn’t look very likely to live out this term.

The trouble with prediction markets is that once the favorites become widely known, the adversaries start to exert leverage in destructive ways: 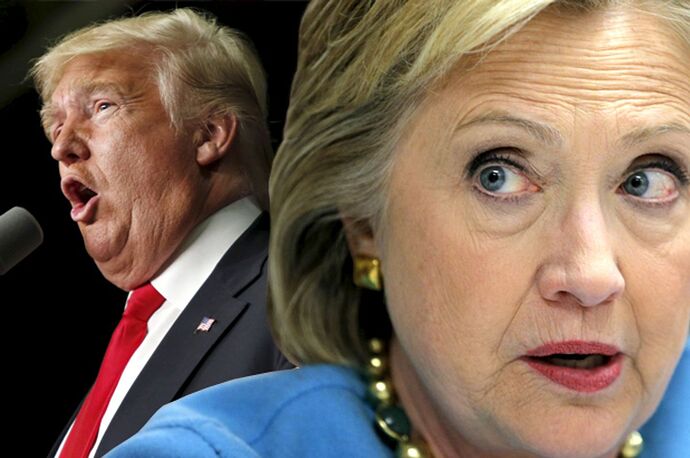 How the Hillary Clinton campaign deliberately "elevated" Donald Trump with...

DeSantis still holds a slight PredictIt lead for the nomination 33 to 30: 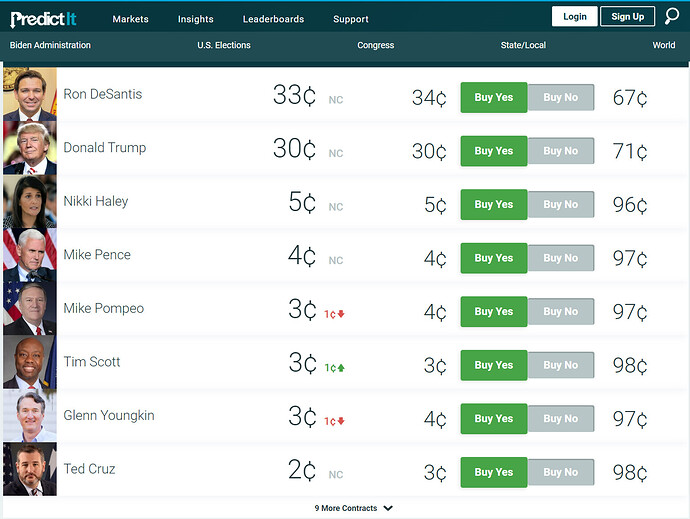 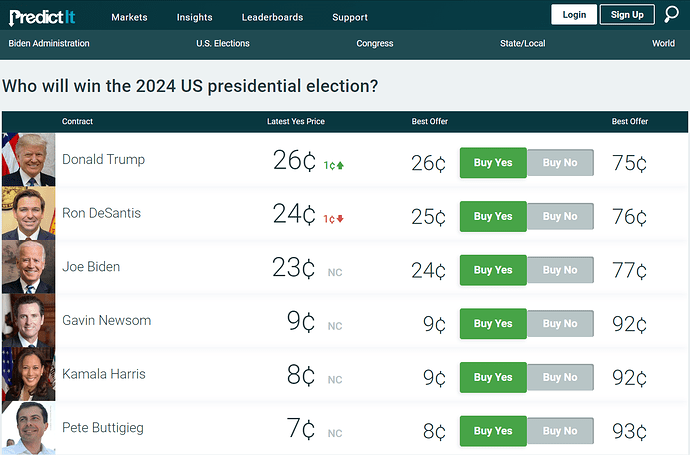 I get all these emails:”We want DonRon!”
Now, wouldnt tht be too effing perfect, If DeSantis would run as VP?
Everybody would know trump can’t run in 2028 but, If Trump does even half as good a job as he did last time, his VP should be a shoo-in. It really is the GOP dream-team.
Of course there re reasons why neither of them might want that. And maybe if Trump gets the nomination he should pick Kristi Noem or Mayra Flores. And maybe DeSantis would feel it’s too big. Risk, running with Trump might scuttle the rest of his promising career. (personally I vacillate between thinking Trump is the ONLY one who can do what needs to be done, and worrying that he may be the ONLY Republican who, could, possibly, lose in 2024.)

But let me take this opportunity to say that, if Trump runs again, he is the bravest man we have ever had in American politics. My god, they didn’t subject even NIXON to the kind of slanderous obloquy Trump has had to endure. How CAN he be willing to take more? Abject adoration is, in my view, the only correct response to such a warrior.

Also, “Show me the man and I’ll find you the crime.”? Beria made it sound so EASY!
Oh, over 7 years now they’ve been yellin’ the ecce homo, But, um—the crime? None so far despite millions of dollars paid to partisan “investigators.” The rabid, Trump- hating AG of NY finally reduced in desperation to bringing a CIVIL fraud suit—when everybody knows it is the responsibility of the lender, not the borrower, to establish the value of loan collateral.

In spite of that, I predict we will see Trump in manacles before the midterms. Which does NOT mean he won’t still run again. He has but one life to give for his country—and he’s givin’ it!