Skunk Works – Fighting the Government to Give it What it Needs

The A-10 is not carrier-qual’d and the Corps must be fleet deployable. It is part of their essence and mission. But something like the A-10 would definitely be nice. Not alone, though. There must also be frontline fighters to ward off enemy fighters. Recollect the doctrine is that the Corps hits the beach with support from the Navy, but once established and in control of the beach head it is on its own. Supposedly the Army then comes and takes over the fight, but waiting for a cumbersome Army to show up is foolish.

This is why the Air Force, Army, and Navy are incompatible in requirements - usually. They just have different missions, so requirements.

I wonder if, at least during the beach head phase, the Navy’s carriers couldn’t provide the fighter support you discuss and then have fighter support transferred to Air Force? I mean wasn’t part of the 21st Century military doctrine for the US supposed to be more “joint operations” and so forth? I’m just spit balling here to try to envision a more intelligent military acquisitions doctrine. I know, a fool’s errand.

Doctrine says the Navy supports the Marine Corps landing - but only to the degree the fleet isn’t in serious danger (read carrier). At that point ALL A/C, Navy and Marine, are engaged in covering the Navy assets. Remember, the admiral in charge of the fleet task force that is performing the assault is in overall command until the Marines are considered solidly in control of the beach head to allow the transfer of command - of the beach head - to the senior Marine commander. The Marine Corps is a part of the Navy, not an independent service. So, eg., all Marine airframes have NAVY numbers, not Marine Corps. All maintenance parts come from the Navy. The Navy must budget for Marine AND Navy aircraft needs.

Yeah that was always a complaint both ways, that the parts had to come through the Navy. We would complain that it bogged down getting our own things and the Marines would complaint that it slowed them down from getting theirs. I do think that the Marines should be afforded some sort of autonomy from the Navy if not outright made its own service. And they need to stop eating our damned food on the ship!!

BTW, we once had something called an A-6 Intruder which was a lot like an A-10, but without the 30mm cannon. That has been scraped. Not sure why. It could deliver the equivalent of a divisional artillery TOT with ONE plane! Plus beacon-bomb, a real boon in bad weather. And a host of other things (like recce, refueling).

I remember the Intruder!! I used to read about it as a kid here: 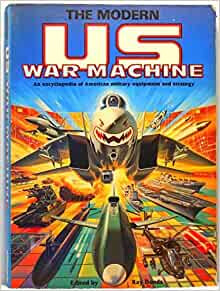 I used to call it for air support.

I guess our times in service are a bit far apart Dev. I was on this: 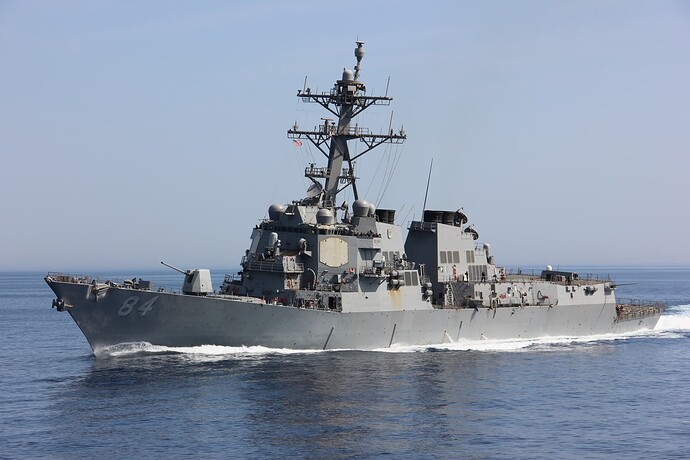 during the beach head phase

Serous question here, since you gentlemen have some hands-on experience. Where in the world do we think that the US might ever be able to launch another contested sea-based invasion?

Looking at economics, ship-building capacity, domestic supplies of raw materials – it seems that the US will not be able to maintain global standing military forces for very much longer. Already, the navy, airforce, & army are shrinking – and the Marines are sadly being outfitted with high heeled shoes. It is also interesting that Russia has so far decided against a sea-borne invasion of Catherine the Great’s city of Odessa – not worth the effort. That paralleled the US decision in Desert Storm to keep the Marines floating around on the ships as a threat rather than as a genuine invasion force.

It might be worth having something like the SEALs who can sneak onto a beach as a small unnoticed detachment and do something. But in today’s world, any major ship-based invasion force would be destroyed before it ever saw the coast.

Generally speaking I agree with your assessment here. Conventional, WWII-style combat is obsolete in my opinion. One thing Rumsfeld had correct was that the US military needs to transition to a mostly asymmetrical force, i.e., those SEALs you mentioned.

That said, amphibious assaults still remain a major conventional warfare doctrine. I could see some use for this doctrine for places in South America and even amongst the Pacific Islands. But if anyone thinks that a D-Day style landing on the mainland of China is going to happen, you are smoking some really good stuff and I want some.

Just an aside, the UAE conducted successfully–for their standards–an amphibious landing at the port city of Aden in Yemen back in 2015. They are the only Arab military to ever attempt and convert such a feat. And it was all due to the training that the UAE received from US Military advisors and contractors teaching them how to do it.

Gavin, check this out: 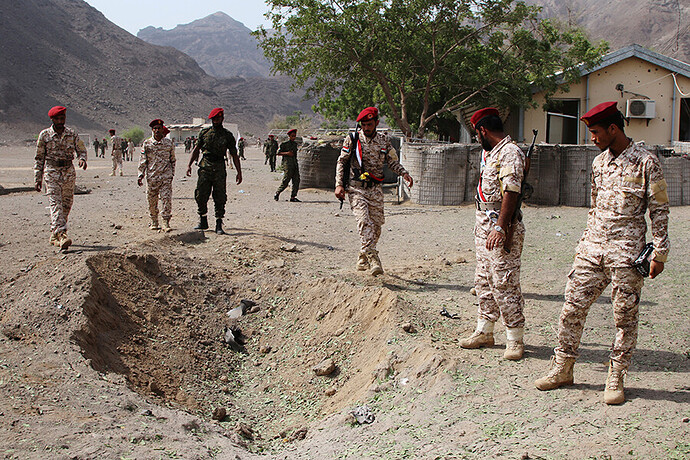 Lessons from the UAE War in Yemen

The Emiratis may be able to guide events with a lighter footprint, but the more likely outcome of their departure is a complete collapse of government authority in the south.

Serous question here, since you gentlemen have some hands-on experience. Where in the world do we think that the US might ever be able to launch another contested sea-based invasion?

As a serious, right now proposition, anywhere in South and Central America, and anywhere in Africa, and a lot of places in the Middle East and even SE Asia. This is not to say we would or should be interested in doing so, but we could. So, for instance, were we so inclined, we could easily and quickly invade - Cuba, Mexico, Venezuela, Guatemala, Brazil, just to name a few. We could also invade any of the Caribbean islands.

The problem with “lessons learned” is that they are not like laws of physics - immutable and universal. There are exceptions, cut-outs, special situations, etc. So let’s take your favorite subject - war with China. ?What would be the parameters.

China proper is densely populated, and an out-of-the-box amphibious assault would most likely not work. But then, it didn’t work so well even in WWII, and we had lots of lessons to learn. One is to prep the battleground. That would be done by air and sea assets. One could most likely removed China’s sea power with nuke subs. Long range missile and bomber strikes would also be useful. Yes, they have missiles that can strike us, but that’s a two-edged sword. ?Want to quickly demoralize your population - get into a nuke exchange with America. A LOT MORE CHINESE would die than us. ?Wouldn’t we have casualties. Of course. But war is messy! Think Europe in either of the World Wars.

War has gotten a lot more complex over the years. It no longer is simply who has the best military, although there is something to be said for a good military. The IDF wiped out three Arab nation militaries in 6 days. You and I pretty much agree on what our position ought to be vis a vis Ukraine, but look what the Ukrainians have managed to do (and let’s bypass the obvious weakness Russia has exposed - that of being mostly a paper tiger). Despite the fact that the Ukrainians seem to be slowly losing the war, Russia is the one MOST damaged in the eyes of the world. That won’t go away suddenly. China will see a similar result IF they invade Taiwan. Those are not straight military facts. The Serbs lost the last Balkan War despite having both the military might AND the moral high ground.

I guess our times in service are a bit far apart Dev. I was on this: 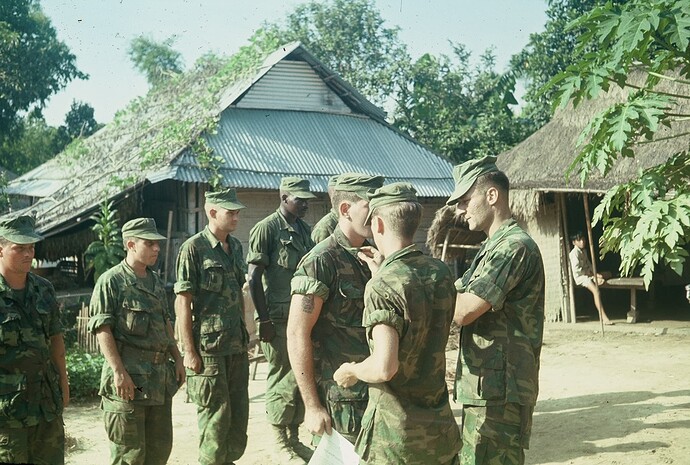 Me, in my war, 1970, southeast of Danang, near Hill 37.I’m the scowling guy on the right promoting one of my troops in a local ville.

Geez my time in service was wasted. I didn’t do anything despite being trained how to intercept electronic communications and attack cell phones in a time when cell phones were used as bomb detonators. I always feel…guilty when folks thank me for my service. I especially feel guilty when you old timers thank me. Quick story:
I was stationed at Pensacola, FL for training and was part of a ceremony detail for Memorial Day. There I was just out of boot camp and a gentleman with an Iwo Jima Veterans hat on came up to me to shake my hand and thank me. (I tear up every time I think of this.) And I just felt so small. I know what happened there. I know that gentleman went through the worst kind of hell. And he was thanking me for my service! I will always regret not going into combat. Thanks Dev, for your service.

A LOT MORE CHINESE would die than us.

The bottom line seems to be that the only place the US could reasonably plan on doing a sea-borne invasion would be as a police action against a mini-country with no real military – rescuing students from a Caribbean island, for example. And if that is the case, why waste scarce resources on maintaining a capacity that no longer makes sense? We don’t have cavalry regiments anymore, for good reason.

My big concern is that wars are now mainly economic. The barney in the Ukraine is a great example – the real loser is the EU, mostly self-inflicted. The best “military” policy for the US today would be to clean up the educational system, repeal vast numbers of counter-productive regulations, and rebuild domestic mining & manufacturing; build a border wall while we are at it, and charge the US military with stopping the shipment of slaves & drugs across that border.

We don’t have cavalry regiments anymore, for good reason.

Not accurate. The Army still fields cavalry, they are just in choppers and not on horseback. I know semantics.

To your point though, these capabilities are maintained because of the 1 in a million chance that you actually have to do it in the future. Plus it is a good way for us to maintain some level of capability so that we can train partner nations how to do it–reference my UAE piece. Your economic concerns are shared, but on the other hand, that is what militaries do–they waste resources…until those militaries are actually needed. That’s the neocon argument anyway. I don’t know what the answer is. I’m more of a libertarian type, so anything more than a national defense force is a waste of money to me.

?Remember the F-4. IT was concieved and built as an interceptor - as all the geniuses of the time stated unequivocally there would be no further ACM (dog fights). ?Guess what. They had to reinvent a later model with a gun, and create Top Gun to teach pilots how to dog fight.

War is never what you think it will be.

One thing Rumsfeld had correct was that the US military needs to transition to a mostly asymmetrical force, i.e., those SEALs you mentioned.

That’s ok to screw with a small adversary. But, if somebody screws with you you then have to escalate to nukes real quick.

And that will not work if you don’t have a big modern nuclear arsenal. And we don’t.

I guess I should have mentioned that the nuclear arsenal should remain intact and expanded to include tacticals.

a big modern nuclear arsenal. And we don’t.

Can you flesh this out? My understanding is very limited.