Starship Recovery Closer to Reality with Testing of Rocket-Catching Tower 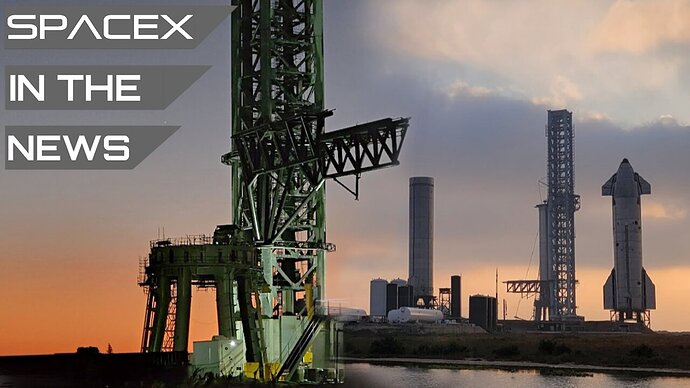 Starship Recovery Closer to Reality with Testing of Rocket-Catching Tower

I can hardly wait to see if/that this technique works. It seems like a common-sense mechanical approach if one thinks of human size or smaller objects; but almost inconceivable that it could scale up to an orbital rocket! My faith in the demonstrated abilities of SpaceX, is such that I believe it has a good chance of success.

The idea of catching a rocket with chopsticks on the launch tower may seem absurd at first glance, but if you look at the experience base of recovering the Falcon 9 first stage boosters it looks a lot more plausible. SpaceX have now recovered 101 first stage boosters, and almost every one, whether on land or a drone ship at sea, has landed within the inner target circle of the landing zone, which is smaller than the area within which the catcher arms can grab the returning booster or Starship second stage. Recovery of the Superheavy booster is very similar to that of the Falcon 9 and, in fact, easier since the Superheavy will be able to hover while aligning itself for catch while the Falcon 9, which cannot throttle down to a thrust to weight ratio of 1, must execute a “suicide burn” with no margin for error. The required landing precision remains to be demonstrated for a Starship returning from orbit but it, too, can hover in the final phase. Also, it is easier to hit a precise target on land than a platform at sea.

Falcon 9 landings provide a large experience base of the actual vertical velocity dispersion at touchdown, so this allows extrapolating the forces the catcher arms will have to exert when grabbing the booster. I presume they have been designed with a suitable safety margin above this.

As for the forces on the landing craft, the current plan, as I understand it, is to grab them by the grid fins. Now, the grid fins take the brunt of the deceleration when entering the atmosphere, so they must be designed to support more than the landing weight of the booster under 1G, so they and their structural connection to the stage should easily be adequate to handle the stresses of the catch.

In an interview in 2021, Elon Musk said that one main reason for catching the rockets was to eliminate the need for landing legs which could support the entire weight of the stage. You already have grid fins which are required for atmospheric entry, and they can support more than the weight of the stage, so there is zero extra weight penalty to use them as the structural hard points for landing. Landing legs, by contrast, are pure dead weight for 99% of the mission profile and dramatically reduce payload capacity. (This was the rocket scientist argument against the space shuttle. In order to put 35 tonnes or so of payload in orbit, they took almost 100 tonnes of wings, wheels, and tyres into orbit and back which would only be used in the last ten minutes of flight. It is much more elegant, efficient, and economical to use the same engines that got you to space to land when you come back.)

Agree with your entire statement above.

As a scientist, I DID NOT BELIEVE THE FIRST LANDING VIDEO OF FALCON 9 – until I watched several landings live.

Truely exceptional execution by SpaceX team in developing and maintaining their launch systems.

Everyone in NASA management ought to hang her head in shame – and resign! Every Congresscritter who voted for NASA’s budget too.

Kudos to SpacEx for this achievement. But let’s not forget that the Delta Clipper - Experimental (DCX) rocket demonstrated launch & return capabilities in the early 1990s. Musk has shown what NASA could have achieved a quarter of a century ago – if NASA then still had had the drive of the guys who put a Man on the Moon.

Thank Goodness for Elon Musk, or we would still be sitting on our hands. NASA still is sitting on its hands as far as rocket development is concerned!

Blame NASA? NASA is a government agency, is bureaucratic by nature, and ultimately answers to the U.S. Congress and the President.

If an earlier U.S. Congress or President had the foresight to order the commercialization of space, a company like SpaceX likely would have prospered at an earlier time.

So had the 60s rocket companies dedicated their funds to effectively lobbying congress/president (instead of being merged with defense companies), the future would have been here decades earlier, in my opinion.

But the Moon Shot was P.R. for cold war missile defense. What U.S. general would hand off strategic advantage for commercialization back in the 60’s? (though today one can imagine a general might do it for a corporate board seat or a seat on future Starship mission!)

Fulton’s Steamboat v. Musk’s Starship is the best analogy – future is bright, if the world can avoid war, plague or other unknown calamity.

future is bright, if the world can avoid war, plague or other unknown calamity.

The future is indeed bright, even though the world will not avoid war, plague or other unknown calamity. That is the lesson of history. That is the obvious conclusion from the 20th Century, which ended with more people living better healthier longer lives at the end than at the beginning, despite all the intervening nastiness.

The real question is whether there will be a place for us in that bright long-term future? If we in the West decline to have children and put our reliance on imported Chinese windmills, the prognosis is as obvious as it is poor. But the world consists of a lot more than just the West. We can be optimistic about the future of the human race!