The Narrow Aisles of Pain

“There is room in the halls of pleasure
For a large and lordly train.
But one by one we must all file on
Through the narrow aisles of pain.”
(Ella Wheeler Wilcox)

In our respective practices, medicine and law, my BMD and I both encountered aged, diminished people who were living well below their means. Oh, they could well afford comfort, cleanliness, plenty—but they didn’t acquire it. They lived and eventually died alone, in squalor. They didn’t help themselves, and they wouldn’t let anyone else help them, either.
A formerly renowned concert pianist. A wealthy and extremely learnéd pharmaceutical executive. A man who had lived for the arts and for travel. “Independence”? Well, I reckon, if you value a fiefdom of a trailer, a hoarder’s apartment with just a cowpath to the toilet, a large house with only one room in use…
Yeah that kind of fate may be awaiting all of us, individually, if /when dementia sets in.
But tonight I’m thinking it’s happening to our very species.
Has humanity ever been wealthier, in all the ways so coveted and valued down the centuries? Abundant food, fuel for heat, access to every entertainment and diversion. Instant and unrestricted communication with people we love.
But what do we tell ourselves? What do we fear? What awful privation, despite the evidence of our senses, do we imagine we must prepare for, deprive ourselves of pleasure and comfort against its coming?
We must all learn to accept eating bugs.
We must all prepare for cold dark homes in winter.
We must all live without private means of transportation.

I often wanted to just SHAKE my clients and my BMD’s patients who, for some incomprehensible reason, would not avail themselves of their ample means. SNAP OUT OF IT! OPEN THE WINDOW-SHADES! CASH A CHECK! GO TO A RESTAURANT! TURN UP THE THERMOSTAT!
It’s no good though. Just like it’s no good pointing out to climate alarmists and socialists how UNBELIEVABLY GREAT we humans alive now have it, compared to people who lived earlier. We effing DO NOT need to deprive ourselves of good food, fuel, transportation, any convenience whatsoever. For what?
But our betters seem determined to force us each and all through the “narrow aisles of pain”. And we’re mos’ly too dumb to resist, we’re lining up to enter the chute, one by one.
Our species is senile.
If I thought it would do my good I’d say : SNAP OUT OF IT!!!

I too have seen that kind of behavior in the aged. Especially people who were young children during the Great Depression. They know – with total certainty, they know, because they saw it happen – that a great life can collapse to a form of hell very quickly. Add that never-forgotten life lesson to the mental degeneracy of aging, and we see the phenomenon you describe.

On the societal level, the West currently has the opposite problem. Everyone who counts (not you & me & the rest of us) has very firm memories of being King of the Hill. They don’t realize how hard the peons were working in the coal mines & steel plants to put them at the international top. And now they have closed the coal mines and offshored the steel plants and don’t realize that their (our!) former greatness is already in the rear view mirror. Those people will indeed drive us through the narrow aisles of pain, without even realizing what they are doing.

But the West is less than 10% of the human race. Other places, other generations have quite different memories. Many living Chinese people remember the horrors of the Great Leap Forward and the Cultural Revolution. They know that life is tenuous at best, and they need to work hard to preserve what they have today. Most living Russians remember the horrible conditions after the collapse of the USSR when the country was looted by their own elite acting on behalf of the West. They too know that life is precarious and preserving it requires hard work and sacrifice. People in many countries have quite different understandings of the nature of life – think of India, Pakistan, Brazil, Venezuela, Argentina. They know that life can be a bitch.

Our society in the West is certainly decadent and senile – but there is hope elsewhere, among the other 90% of humanity.

Do not sell us short. Yes, the current elite have foolish ideas of greatness, based upon their current ability to spend $15,000 on wine, or buy a Ferrari, or own 4 homes around the world. THAT will come to an abrupt end, probably when we fall off being the world reserve currency, an imminent event if things continue as they are.

BUT down here on the ground, down here where real work is accomplished, people are not happy with the behaviors exhibited by the elite. Yes, they have “money” - but even its value is shrinking. The millionaires are bitching about the billionaires “taking over”. The workers understand work, creating objects, making things. IF, indeed, we fall “into the aisles of pain” it will be the elite who will suffer most because they will have little to offer the barter economy that will ensue, and their “money” - like ALL fiat money - will have no value. ?How then will they “survive”. They could barter away their precious Maybachs or Porsches or McLarens but those won’t bring the value of a good truck in such an environment.

A future requires a positive, hopeful worldview. The elite with their openly and camo’d eugenics ideas, are not hopeful of the future; they are merely hoping to hold onto what they now hold. That won’t work.

I think there is ample historical precedent for those who are engaging in self privation. Remember St. Simeon Stylites? He lived in Syria 4th century and spent 37 years atop a pole to “be nearer to God”. This was the Christian version of asceticism. I believe that is one of the motivations for the environmental and woke lunacies, along with the self-generated high which inevitably results from righteous indignation. All of this is consonant with modern concepts of behavioral, as opposed to ingestive, addiction. Fits right in to the mainstream of society’s present ethos.

Gavin, yes you’re right, I knew it as soon as I posted. I should t have said “our species” is senile—maybe “our civilization”, “our society”, or sump’n. But, I do think we’re approaching, worldwide, the Tower of Babel scenario, right before the Almighty upended the game board: we can all see what everyone else is doing, everywhere, how they’re living…the First and Third Worlds collide, leach into each other. (WTF is the Second World, btw?)

Devereaux, I’d like to believe it’s only the elites but…it really is hard to find ANYONE, at any level of income and education, who will cop to believing that environmentalism is bunk and, actually, it is not a good idea on any level to work toward saving the planet. It just appears to me that at every level of our society, people are willingly submitting to a modicum of punishment—while others are positively banqueting on it.

that is THE mot juste, phrase of the day. And the reflexive “of course I care about the planet!” response I described in the preceding paragraph is an example of it. Habit is, well, habit-forming.

Even if you’re a bleeding heart environmentalist, there’s absolutely no point in engaging in suicidal policy that merely transfers the control of Earth to folks who do not engage in environmentalism. This is actively making things worse!

The policies that work are active ones: take control of resources, be a good long-term steward and owner. That’s what farmers did with their land, that’s how aristocracy used rangers to protect their hunting grounds in Central Europe from hungry farmers who’d burn it off, consequently protecting pristine forest and wild animals.

One of the most striking examples is how the quality of land ownership affects the ecosystems is portrayed here: 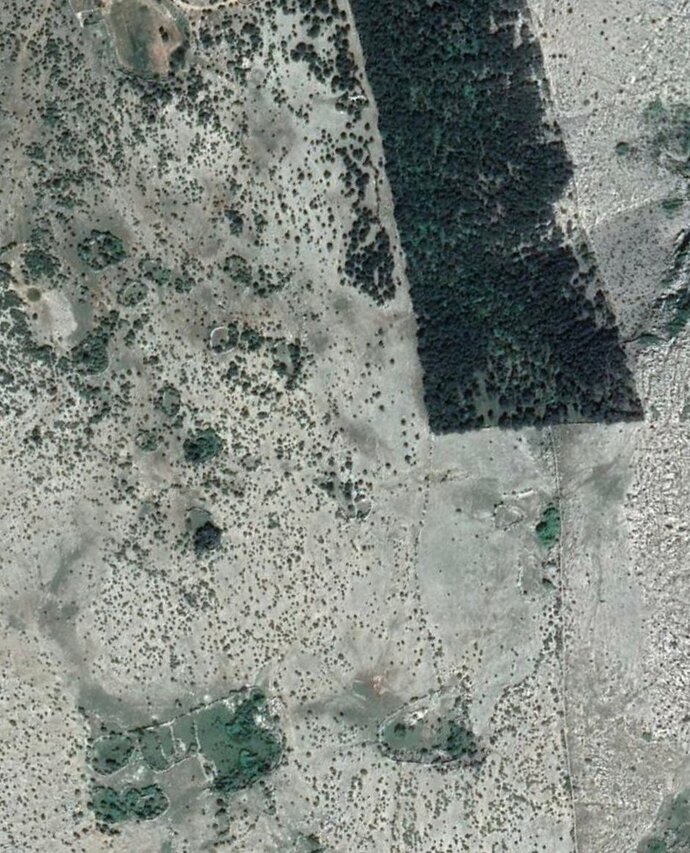 @
A strangely shaped lush strip of forested land in the middle of arid rocky terrain. Nearby, there are abandoned buildings and what used to be plots of arable land, now just an arid wasteland. What happened in this area near Punat on the island of Krk in Croatia?

Finally, some of the themes are cyclic in nature. People have a visceral memory of what their grandparents might have taught them, but the grand-grandparents’ learnings are forgotten. This leads to about a 100 year cycle of disaster in our societies. Here’s a prophetic prediction of 2020’s troubles, written about a decade ago: https://www.lifecourse.com/assets/files/turnings_in_history(1).pdf – more information at