They Couldn’t Get Jussie Smollet?

Really, that picture of the “white supremacists” posing as Youngkin supporters gets funnier every time I look at it.

Ok never mind the black guy. Arguably, just another “foot soldier for white supremacy”. But the woman? She reminds me of those Shakespeare plays heroines who bravely tuck back their hair and don britches, and somehow, nobody suspects a thing until the Big Reveal, despite all the suggestive wordplay…it’s a laffriot.

But the Lincoln Project is PROUD of this stunt!
They wanted to remind people of “what happened in Charlottesville.” Y’mean, when Trump expressly excoriated the neo-Nazi types, but graciously allowed there were “very fine people” on both sides of the debate about Confederate hero statues ? Okay, thanks for that.

this has been the Left’s (and now the never-Trump Right’s) go-to riposte since Tawana Bradley, through the Duke Lacrosse debacle, through Smollet:
“So WHAT if it isn’t true? It COULDA been!”

My hatred knows no bounds. So “let me laugh awhile, I’ve mickle time to grieve”.

My hatred knows no bounds.

Yup! Also reminds me of Dan Rather, who coulda been right.

The Lincoln Project is nothing but a group of avaricious perverts. May they burn in hell forever. 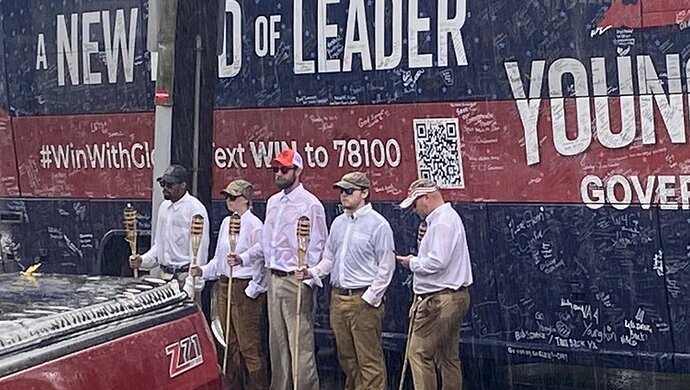