This Week's Book Review - The Brunels, Father and Son 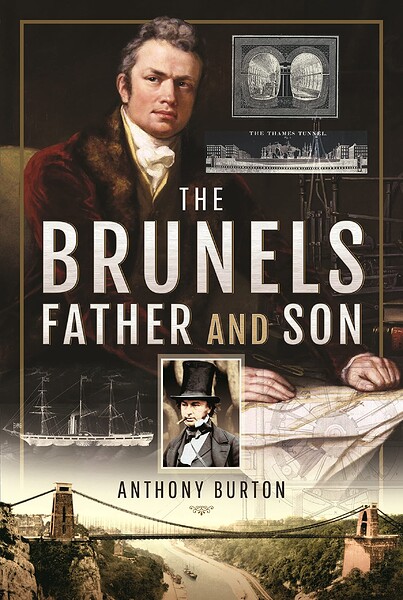 The Brunels, Father and Son1719×2560 499 KB
Looking for a good read? Here is a recommendation. I have an unusual approach to reviewing books. I review books I feel merit a review. Each review is an opportunity to recommend a book. If I do not think a book is worth reading, I find another book to review. You do not have to agree with everything every author has written (I do not), but the fiction I review is entertaining (and often thought-provoking) and the non-fiction contain ideas worth reading.

Isambard Kingdom Brunel is probably the most famous engineer of the nineteenth century. He may have been the best. Or not. Another lesser-known Brunel is in the running for that title; his father, Marc Isambard Brunel is.

“The Brunels, Father and Son,” by Anthony Burton, is a joint biography of two remarkable men. Burton does a compare-and-contrast on the pair. He concludes it is hard to say who was better.

Burton’s biography follows the lives of both men. Marc was born in France. A Royalist, he was forced to flee the revolution, ending up in the United States. Burton shows his successes there. He designed canals, became the chief engineer of the City of New York, and submitted an impressive design for the Capitol in Washington D.C.

He left the United States for greater opportunities – and love. His family had sheltered Englishwoman Sophia Kingdom while she was in France during the Revolution. The two were taken with each other. Alexander Hamilton had made Marc aware that the Royal Navy had a shortage of blocks, used to manipulate rigging. Marc had a way to mass-produce them. With a way to support himself in Britain, he reunited with Sophia, marrying her. He really did live happily ever after with her, while helping the British defeat Revolutionary France.

His son, Isambard Kingdom, was one fruit of the marriage. He worked alongside his father for many years. Besides the Thames Tunnel the pair worked on bridges, canals, and buildings. While Isambard eventually went off on his own, it was not because he did not get along with his father. Rather, the two were so successful they each pursued their own interests. They continued collaborating until Marc’s death.

“The Brunels, Father and Son” is a delightful book. Burton highlights the accomplishments of each man, while showing how the two complimented and assisted each other. He captures both the good and the bad times that each experienced as well as their successes and failures. He also shows how both helped shape the industrial age and illustrates how their legacy continues even in this century.