@USCISDirector
Today @USCIS announced a new mission statement - one that reflects the inclusive character of both our country and USCIS. (1/2) 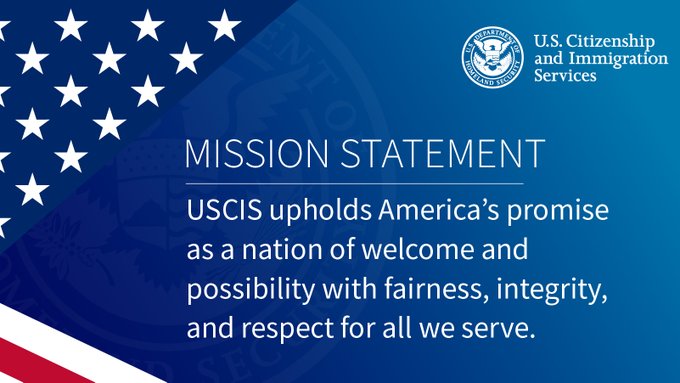 Here is the old, tired mission statement it replaced, as archived by the Wayback Machine on 2022-01-02:

U.S. Citizenship and Immigration Services administers the nation’s lawful immigration system, safeguarding its integrity and promise by efficiently and fairly adjudicating requests for immigration benefits while protecting Americans, securing the homeland, and honoring our values.

The mission statement of the U.S. State Department is:

Create a more secure, democratic, and prosperous world for the benefit of the American people and the international community.

Perhaps, to that end, they could, among stirring up wars in Syria, Ukraine, Yemen, and every other armpit of the world, find a way to expedite the now longer than one year backlog of more than 300,000 who wish to renounce their U.S. citizenship and no longer be numbered among the “American people" whom these federal departments “serve”.

Very few of us are paying any attention to the Winter Olympics. But one little item did manage to escape into the headlines: two California Girls, second or third generation offspring of Chinese immigrants, decided to switch to Chinese citizenship and compete in the Olympics for China’s team.

It would be great to learn more about the background. Does the US Olympic Committee practice the same kind of discrimination against Americans of Chinese heritage as Harvard University does? Did President Xi make the young ladies an offer too good to refuse? Or is this kind of switch in allegiance – probably unthinkable a generation ago – a straw in an increasingly strong wind?

But one little item did manage to escape into the headlines: two California Girls, second or third generation offspring of Chinese immigrants, decided to switch to Chinese citizenship and compete in the Olympics for China’s team.

There is a funny article in Sports Illustrated dated 2022-02-08 about Olympic skier Eileen Gu (Gu Ailing), who was born in California and competed in the 2022 Genocide Games in Peking. At a press appearance, Gu was asked repeatedly about her nationality status, as Olympic rules require national team members to hold the nationality of the team for which they compete (if the athlete is a dual or multiple national, they may compete for any nationality they hold). Chinese nationality law does not recognise dual nationality, so if Gu was granted Chinese nationality in order to compete, she should have had to renounce her U.S. citizenship, which would not be possible prior to her turning 18 shortly before the Olympics. Here’s extracts from the presser and comments from Sports Illustrated.

REPORTER: “Did you have to give up your U.S. citizenship to compete for China?"

GU: “I’ve always been super outspoken about my gratitude to the U.S., especially the U.S. team. I feel as though they’ve helped me out so much in my development, they continue to support me. And same with the Chinese team. They’ve always been super supportive and they’ve helped me so much. And so in that sense, I think that that speaks volumes to the ability of sport to bridge the gap and to be a force for unity.”

This is like responding to “What is your favorite flavor of ice cream?” with an 80-word answer about your appreciation of milk cows. Gu obviously made a deal. The only question is, what were the terms? If Chinese officials allowed her to maintain her U.S. citizenship, it would likely be under the condition that she keep quiet about it, lest the world know they violated their own law. If they forced her to give up her U.S. citizenship, that would bring backlash in the States.

“If people don’t have a good heart, they won’t believe me, because they can’t empathize with people who do have a good heart. And so in that sense, I feel as though it’s a lot easier to block out the hate now. And also, they’re never going to know what it feels like to win an Olympic gold medal.”

It sounds to me like China simply allowed her to compete without bothering with the nationality question, or else naturalised her without requiring her to reliquish her U.S. nationality (which should be no problem given the Chinese approach to rule of law when seeking an outcome). The U.S. recognises dual nationality, so such a grant would not affect her U.S. nationality.

The Gulf States have been playing this game for years. In 2016, 23 of the 39 people on the Qatar Summer Olympics team were those granted instant citizenship and a big cash bonus to compete for Qatar.

two California Girls, second or third generation offspring of Chinese immigrants, decided to switch to Chinese citizenship and compete in the Olympics for China’s team.

Maybe they can enjoy a stint in one of those lovely work camps they have over there.

GU: “I’ve always been super outspoken about my gratitude to the U.S., especially the U.S. team.

Which raises the question – Why not stick with the US Team? Clearly, as a person who went on to win a Gold Medal, she had talent. And there have been other reports in which she described how hard she trained. My spidey sense tingles – hints of unacceptable racial discrimination within the US Olympic hierarchy?

I wish China were the only country where the Rule of Law is so flexible! Think of those poor guys who went to the People’s House a year ago January to exercise their Constitutional right to petition the government, and they are still sitting in jail cells a year later waiting for their Constitutionally-guaranteed right to a speedy trial.

The mission statement of the U.S. State Department is:

Create a more secure, democratic, and prosperous world for the benefit of the American people and the international community.

Maybe the regime should concentrate on securing some semblance of democracy in the home country. Not that two wolves and one sheep deciding what’s for dinner is such a great system either.

How brave of Biden Administration to obfuscate the racist word “citizenship” in an acronym (i.e. replacing U.S. Citizenship and Immigration Services with U.S.C.I.S).

Also the racist word “lawful” was taken out of the mission statement.