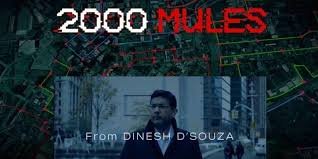 Pretty sure that’s a pirate copy. I’m interested in the discussion, but it feels bad to rip off the team that paid a lot of money for the GPS data to make the film.

That’s fair and I am completely sympathetic to the sentiment. I live in Delaware and I am pretty sure there isn’t a theater in driving distance of me that will show it. I had to do what I had to do because I think this is a powerful hour and a half.

I think one day last week it was in a handful of theaters across the bountiful fruited plains, and I have heard that they are going to re-run it in more theaters in the coming weeks.

You can get the full on Dinesh’s Locals channel with a yearly subscription. I have not, so I could be mistaken.

I don’t need more evidence. I already support a forensics audit with signature match. I doubt it will ever happen so I will maintain that there was massive wide spread fraud until such investigation happens.

If it is squeaky clean there should be no argument to complete an investigation. If we have 40 billion Bidenbucks for unknown purposes in Ukraine, we should be able to conjure a few more for the sake of election integrity.

I, too, believe it is more likely than not that the election was stolen. In the big picture, though, the country is being stolen from us right before our eyes. Open borders, refusal of photo ID, never purging voter roles, vote harvesting, permitting “non-citizens” (= illegals) to vote in local elections, zero penalty for “erroneously” voting when it comes to these same illegals; no penalty for illegals entering illegally or for engaging in identity theft - i.e. working with fake SS#'s; free everything which we must pay for. What a privilege it is to be a citizen!

I bought the DVD. Watched it with my skeptical daughter last night. Her eyes were bugged out by the time it finished.