In the 1984 movie 2010: The Year We Make Contact, a joint U.S.-Soviet mission to Jupiter is aborted when international tension between the two superpowers results in an order for nationals of each to depart the other’s territory—including spacecraft. 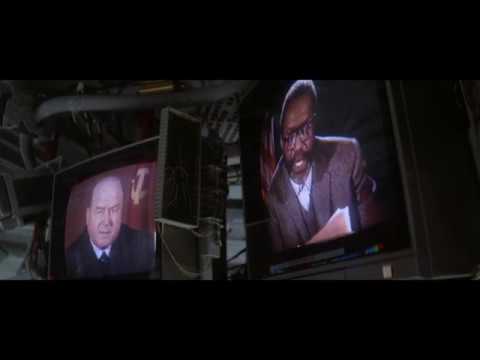 In 2022, in a video posted on February 26, Dimitry Rogozin, Director General of Roscosmos, posted a video in YouTube [in Russian] in which he warned that sanctions imposed on Russia in response to its invasion of Ukraine might lead to Russia detaching its segment from the International Space Station and refusing to return U.S. astronaut Mark Vande Hei, currently on board the station, on Soyuz MS-19 planned to depart and land in Kazakhstan on 2022-03-30.

Here is a Hazegrayart animation of the separation of the Russian and U.S./international segments of the International Space Station, set to the Ukrainian national anthem.

A nice touch is a SpaceX Crew Dragon approaching at the end, appearing to deliver a replacement docking adapter which would provide international docking ports where the Russian modules had departed.

Any actual split-up of the station would be complicated by the fact that the core Zarya module, without which the Russian segment could not operate, was, despite being built in and launched by the Soviet Union, paid for in full by NASA, and is thus U.S. property. There are also a large number of external connections between the Russian and international sections which would have to be disconnected, which would require cooperative EVAs by both parties.

RIA Novosti has posted their own video of Russian cosmonauts bidding farewell to U.S. astronaut Mark Vande Hei and then detaching the Russian segment of the ISS (along with the U.S. owned Zarya/FGB module) and going their own way.

The Telegram (whatever that is) video cannot be embedded here, but you can view it on Twitter.