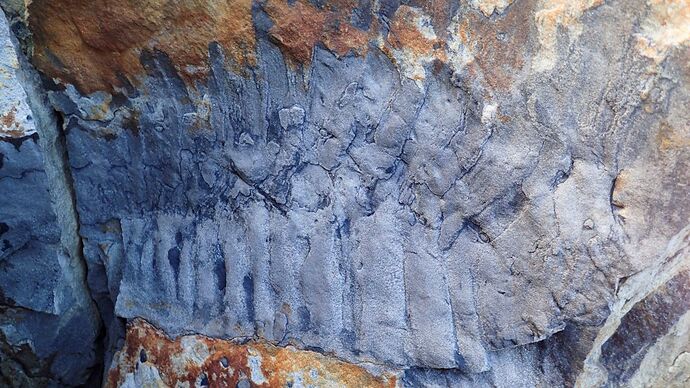 Scientists find fossil of largest arthropod to ever live, a car-size millipede

They were likely one of the biggest animals living on Earth at the time.

Researchers in the U.K. have found the fossilized exoskeleton of the largest arthropod to have ever lived. These giant millipede-like creatures were the length of a car and likely roamed Earth during the Carboniferous Period, between 359 million and 299 million years ago.

Researchers discovered the new Arthropleura fossil, which is around 326 million years old, inside a fragmented block of sandstone on a beach in Northumberland in northeast England in 2018. The exoskeleton fragment is 2.5 feet (75 centimeters) long and 1.8 feet (55 cm) wide. This means the individual that molted it would have been around 8.5 feet (2.6 meters) long and weighed around 110 pounds (50 kilograms), according to the researchers.

The research article from Journal of the Geological Society is “The largest arthropod in Earth history: insights from newly discovered Arthropleura remains”.

Here is more about Arthropleura. When Arthropleura lived, the partial pressure of oxygen in the Earth’s atmosphere was greater (as high as 35% of the atmosphere, compared to 21% today). This allowed arthropods, which lack lungs and a pumped circulatory system, to grow much larger than at present.

Not much of a car.

The Smart ForTwo was that length: 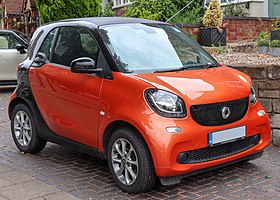 Even the Gen. 4 Toyota Starlet was 3.7 meters long:

The Starlet 80 series was introduced to the Japanese market in December 1989. It featured a more rounded body style and interior. Japanese models received new twin cam engines: 4E-F, 4E-FE and turbocharged 4E-FTE. Export models retained the 1E and 2E engines, and the special version 4E-FE (only for UK and Hong Kong facelift models). The 1N 1.5-litre diesel engine was also available. The Starlet for Japan and Indonesia have a rear center garnish and therefore the license plate is mounted on the bu...

But bigger than the Peel 50! The Peel P50 is a three-wheeled microcar originally made from 1962 to 1965 by the Peel Engineering Company on the Isle of Man, and then from 2011. It was listed in the 2010 Guinness World Records as the smallest production car ever made. The original model has no reverse gear, but a handle at the rear allows the very lightweight car to be manoeuvred physically when required. Designed as a city car, it was advertised in the 1960s as capable of seating "one adult and a shopping bag." The vehicl...

And the ‘driver’ could reverse!

Oxygen is one of the many things in life you do not appreciate enough – until it is lacking!

Researchers discovered the new Arthropleura fossil, which is around 326 million years old, inside a fragmented block of sandstone on a beach in Northumberland

How long was that block of sandstone sitting on that beach? People have been fighting battles for Northumberland for centuries; how many warriors blew past it never realizing it was there? These things worry me. Cars don’t worry me, but missed chances like that? All the time.