A Memory Hole in Our Lawn: The Housing Market

communism won hands down in terms of creating maximum misery for the societies upon which it was imposed.

No question that communism is streets ahead of financialization at this point in the game – but the game is not over!

Communism in its classic Stalin/Mao mode is essentially a spent force. It has already done its worst – and its worst was very bad. Financialization is still on the field, still playing. When we try to forecast (say) the consequences for us people in the financialized West when the East inevitably refuses to trade any more real goods & services for more BidenBucks … the picture is not pretty.

…and viv à vis my topic: will our govt outlaw private ownership of land, like Lenin did, like all the Communist countries did? I don’t think it’s inconceivable. Of course after the USSR breakup, it became legal again, and the different ways in which those countries dealt with it makes a fascinating study.

will our govt outlaw private ownership of land

(Flaming libertarian here)
What private ownership of land? Unless you have allodial title to your land and the property on it, you do not own it. You are a tenant, subject to the eminent domain rights of the sovereign, which includes demanding you pay rent (property tax) in order to retain possession. Don’t pay, and the sovereign will seize it.

A few states in the U.S. have some form of allodial title, but this applies only under state law, with federal law supreme. Thus, there is no true private ownership of land in the U.S.

A few minutes walk from my house is some land, le Franc-Alleu, which was declared allodial in 1705 and remained so until 1992, when the rights and outright ownership of the property owners were seized by the sovereign power of the state. When I walked through that area shortly after moving here in 1991 was the only time I have ever stood on private property in my life.

Fee simple property title is such a great racket for sovereigns that I doubt they’d be inclined to give it up. Property “owners” are responsible for all of the costs of maintaining the property and all the liability resulting from it, yet owe eternal rent to the sovereign for taxes and fees to retain it, and another bite every time it changes hands in an estate. 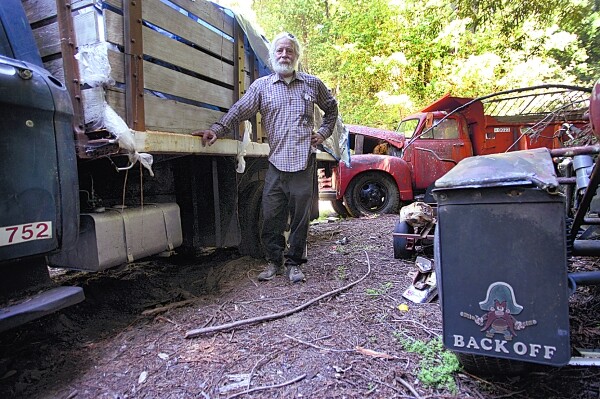 Once covered with more than 50 old cars, rusting machinery, and other debris, the land near Big Basin is now cleaned up.

From the story: “But this was an extraordinary case. It was attracting nuisances. People were living on the property, selling illegal drugs, the sheriff said.”

The thieves always have some nonsensical story. Sheriff, if there is illegal activity, why have you not arrested anyone? Do you force the sale of property in the city due to crime?

From the map it looks like it is 10 miles or more from the nearest town. I guess old cars 10 miles from town are a bigger nuisance than human feces and needles just up the road in San Francisco.

Do you force the sale of property in the city due to crime?

According to the statement of facts in the latest appellate case, Mr Kaylor did cooperate in regard to evicting the drug addicts and cleaning up the property. However, once it got in the hands of court-appointed receiver, the receiver started spending at Mr Kaylor’s expense and finally he appears to have gone broke:

So the method is just to get a citizen involved in a lawsuit and strip him of all his assets via attroney fees, receiver fees and costs.

There was a man living in a shack on a small piece of property in our neck of the woods. He didn’t have plumbing and was using a bucket. The township kept fining him for violating various health and building regs. What a daily fine is imposed it builds up fast. He soon owed them far more than the land was worth. They reduced the amount owed to judgment, and they seized his property and forcibly removed him.
A week later, he walked into the township building during the commissioners’ monthly meeting, and shot them all.

All true. But in the Olde Countrie, the sovereign could simple re-appropriate anybody’s land, at will. At least we have the Fifth Amendment requiring just compensation.

OTOH I don’t see the justice of property taxes. Land used to make money for people, but now in general it doesn’t—or if it does, like commercial rentals, you have to pay tax on that income AND a on the value of the land.
If the government secures your property rights, i reckon that’s something. We have a legal mechanism whereby we can remove trespassers, etc. And then national defense: we could all lose our property rights if our nation were conquered by a foreign invader.

A week later, he walked into the township building during the commissioners’ monthly meeting, and shot them all.

Ahhhh…, those Unintended Consequences. Amazingly, at the moment, this book is available from Amazon in paperback at an affordable price. It was nearly suppressed for many years. It’s kind of like Atlas Shrugged for those who shoot back instead of shrugging.

I’m on it!
I always told the township our office represented: filing citations and complaints works fine with people who don’t want trouble. But with people already beyond that, don’t push them. It won’t change their behavior, and if you take the process to the extreme, there will be some tragic sequelae.

You have just explained why London’s Metropolitan Police seems to spend their time stopping mean tweets while ignoring the knife violence on the city’s streets. The law has become a holy terror to the law abiding – and a mere nuisance to those who ignore the law.

Problem from a societal perspective is that the real issue is the people who happily flaunt the law and ignore civilized behavior.

I don’t. Yes ESG is a bit scam for the likes of Blackrock who charge a half percent more in mgmt fees for their ESG funds. But power is also involved. Twitter is a perfect example. I think it is already evident that the power is more important than the money. Besides the 20 to 50 percent a shareholder would gain is not the same as a change in the management fee. If the approximately 50 billion offer represents a 20 billion gain to the fund investors, it is only 0.5 percent of that for the fund manager who actually makes the decision. 100 million. CNN pissed that away for CNN plus.

Agreed - ESG is a bit scam, a little bit of extra skimming of the cream on the back of bigger rackets. Climate change is the main racket in my view, with an enormously destructive force applied gradually across almost all dimensions of modern life. Including the abuse and destruction of the meaning of the term “science”, rule of law, and industrial development policies that single-handedly lifted billions out of abject poverty and famine.

Or in the words of the inimitable Vladimir Ilyich Ulyanov “the key question of any revolution is the question of Power”… But the lessons of the French Revolution would probably still hold, and while I sincerely hope and pray we will be sparred a modern day version of La Terreur, it’s worth remembering “like Saturn, the Revolution devours its children.”