A signal of vaccine efficacy?

Ben, the purveyor of USMortality, posted some interesting data and plots on Twitter (@USMortality) recently. The plot of 2021-22 flu season all-cause mortality (ACM) per 100K population (y-axis) v. percent fully vaccinated (x-axis) by state (lower left in figure below) strongly suggests the injected are significantly better protected. (Please note that “flu season” basically means the cold half of the year, nominally consisting of weeks 40-52 of one year combined with weeks 1-13 from the next. These are ACM data, and not flu cases or confined to flu deaths.) 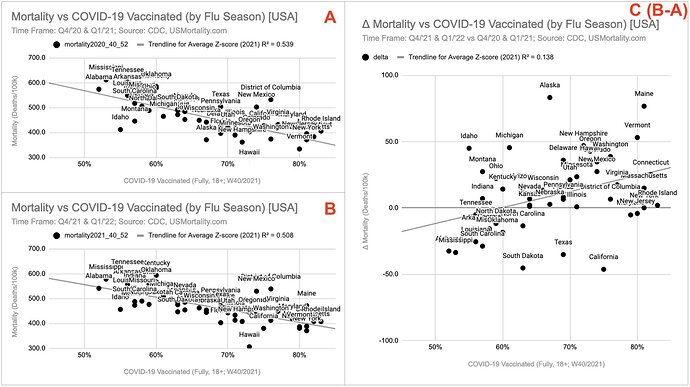 However, a very similar relationship was found for the 2020-21 flu season, which was largely before the vaccine rollout (upper left). Clearly, there is at least one confounding variable. He then plotted the change in mortality between 2021-22 and 2020-21 (y-axis) v. fully vaccinated percentage (x-axis) (plot at right above) and found a small positive correlation, weakly suggesting that more vaxxed states actually had worse outcomes in the vaccine year 2021-22. In other words, there’s no evidence the vaccines have been protective.

The Ethical Skeptic on Twitter has been doing some analyses like this [1], as has Mathew Crawford on Substack [2], but I’m going to use Ben’s data as a starting point for my expanded analysis, which seeks to compare COVID years to the pre-pandemic 2015-19 period. There are some glitches in Ben’s analysis, which I identify and resolve below, but his main conclusion is unchanged: there is no demonstrable benefit from vaccination detectable in the all-cause mortality data, at least that I have been able to find.

The two most important glitches are:

In the figure below, (a) shows 2021-22 season ACM for each state plotted against the percent of 18-64 year olds who were fully vaccinated as of Week 40 of 2021. Efficacy! Give Pfizer and Moderna another half a trillion dollars. The squared correlation is R2=0.55, equivalent to a simple linear correlation of r=-0.74. Low mortality rates for those science-believing Blue States like CT, MA, and VT. Meanwhile, they’re dropping like flies in recalcitrant, science-denying Red States like AL, MS, and AR. UT and WV seem like outliers, perhaps consistent with age (UT has the lowest median age, WV the highest of the retained states). Something’s rotten in NM and keep in mind NY is lacking NYC.

My R2 (0.55) is higher than Ben’s (0.44) possibly because incomplete records can skew the relationship, increasing the scatter. Some of the states I had to remove were among the worst outliers in his plots.

Plot (c) helps prevent misinterpretation because there’s no COVID contamination in those data at all. It is clear that ACM is higher in some states than others. Wealth, health, education, and demographics all have roles to play, among other factors, but that confounder has to be removed to truly assess whether the vaccines are doing any good.

Finally, (d) shows the change of ACM from the 2020-21 to 2021-22 seasons, plotted against percent fully vaxxed, similar to what Ben looked at. Again bearing in mind some of the 2021-22 season data may be incomplete, most states in the analysis had higher ACM in 2021-22 than in 2020-21 (so it might actually be worse). Only 8 of 35 states had higher mortality in the first COVID year, including CA, LA, MS, TX, NJ, AL, SC, and GA. Largest ACM increases year on year were in WV, MI, OH, and NM. But, overall, there’s no correlation with percentage of fully vaxxed. Zero. If the vaccine were efficacious, would we not see some kind of signal in these statistics?