A company that has been advertising recently on otherwise respectable YouTube channels brought to mind a nostalgic scam I recall from childhood, the Klondike Big Inch Land Company. 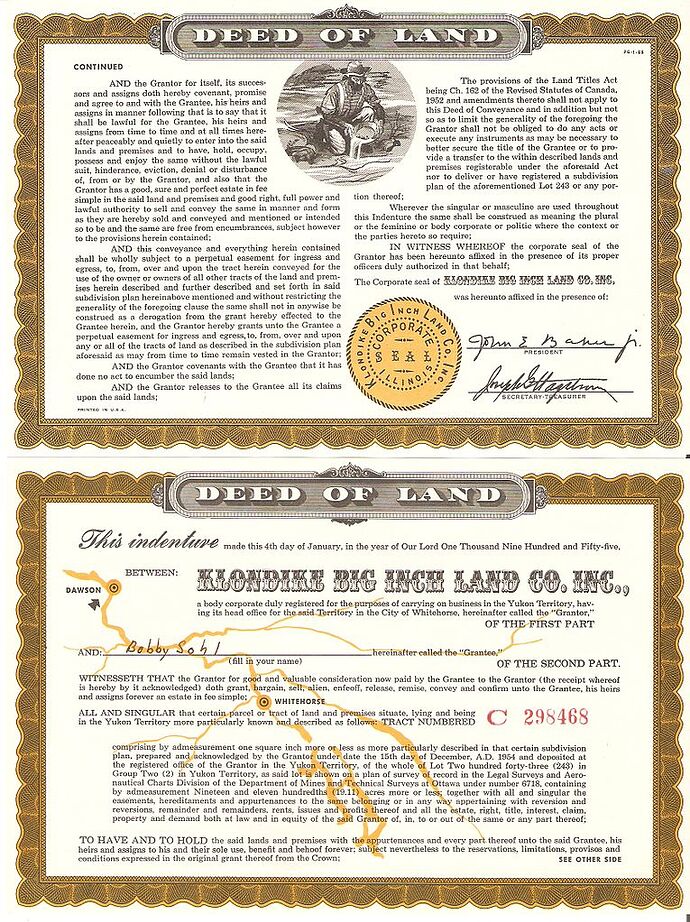 765×1023 276 KB
This was an invention by Chicago advertising man Bruce Baker in 1955 as a promotion for the Quaker Oats Company, which wished to promote their cereals to children, who were attracted to competitors’ products by gimmicks such as “a prize in every box” or “send two boxtops for…”. At the time Quaker Oats was a long-term sponsor of the radio adventure series Challenge of the Yukon and its just-launched television successor Sergeant Preston of the Yukon about the redoubtable Mountie Sgt. Preston and his heroic dog King, who had been raised by a female wolf. The series was popular with children as well as adults, and Baker thought of a perfect promotional tie-in with the show.

Anyway, the campaign was launched in January, 1955 in 93 newspapers around the U.S. in advertisements headlined “Get a real deed to one square inch of land in the Yukon gold rush country” and “You’ll actually own one square inch of Yukon land”, including a form readers could mail in with a box top from Quaker cereals to receive the deed for their Yukon homestead. This caught the eye of the Ohio Securities Division who, in February 1955, banned the promotion until Quaker Oats obtained a state license for “sale” of foreign land. In response, the company simply started including the “deeds” in each box of cereal. 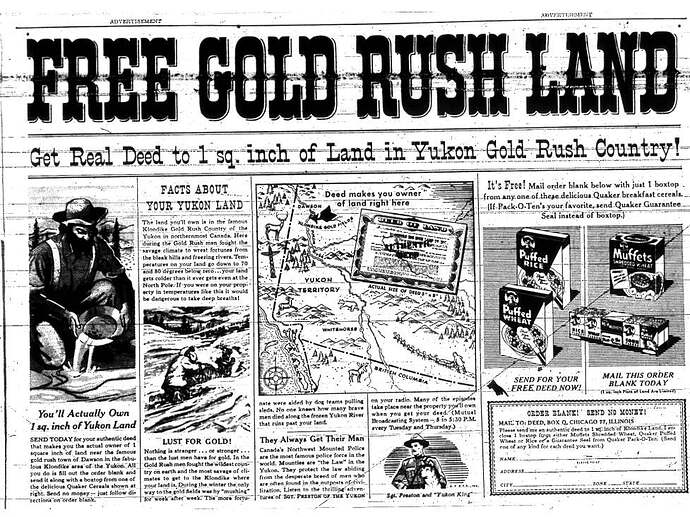 977×733 184 KB
The whole thing was a sham and scam. The “deeds” were never registered, and those who received them were not owners of anything. And to gild the scamminess, the “deeds” excluded mineral rights, so just in case a few flecks of gold should be found beneath the square inch of Yukon land the deed-holder didn’t actually own, they didn’t own it either.

The promotion was a big success, and made an impact in popular culture. In 1956, a Scrooge McDuck comic book parodied the event in an adventure where Uncle Scrooge visits the square inch of land in Texas he found in his breakfast cereal, believes he has discovered oil beneath it, and sends Donald and the nephews off to buy up cereal boxes around the country to assemble the neighbouring square inches into an oil field. 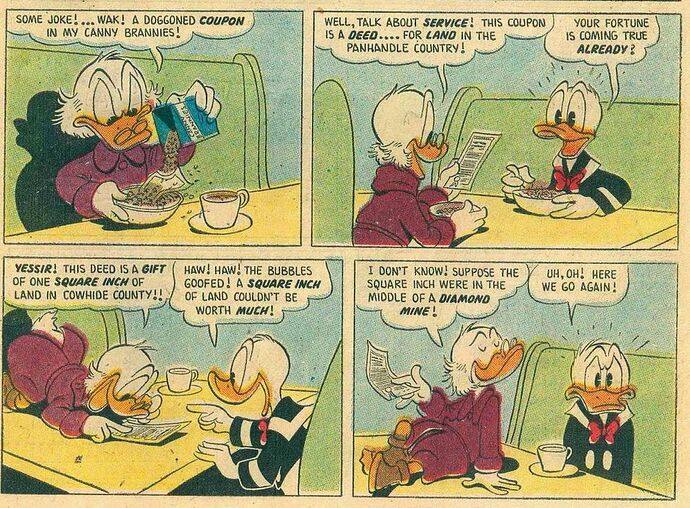 1000×737 256 KB
In 1965, the Canadian government repossessed the parcel for CAD 37.20 in unpaid back taxes, and the Great Klondike Big Inch Land Company was dissolved in 1966. The land is now part of the Dawson City Golf Course. Officials in the Yukon still get letters from people who discover the “deeds” in attics and inquire about “their” land. This article, “The Klondike Big Inch”, on Yukoninfo.com, includes some sample letters from a file which is said to be 18 inches thick.

Anyway, that was 1955 and today, in 2022, we’d never fall for something so silly. Would we? Would you like to become a Scottish Laird (or Lady)? Well, check out the “Lordship & Ladyship Title Packs” being peddled by “Established Titles” of Lessendrum, Huntly, Scotland. 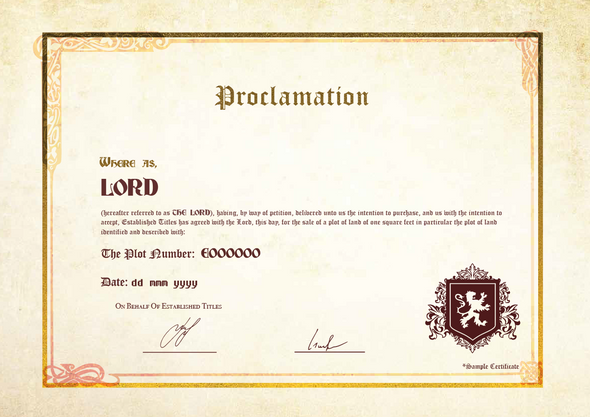 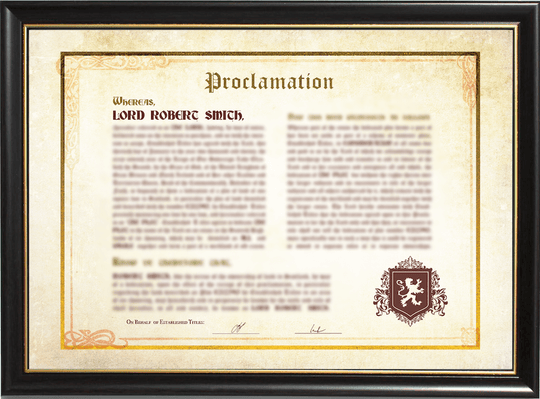 I think the Big Inch “deeds” looked a lot better, and they were actually printed on paper and suitable for framing once you brushed off the oats and sugar.

A one square foot estate costs only US$ 49.95, but there are no discounts available for including boxtops. Similarly to the Big Inch Land Company, the Established Titles Frequently Asked Questions page notes:

What are souvenir plots?
The plots of land themselves are recognised and referred to as ‘souvenir plots’ in Scotland. Though souvenir plots are typically too small to be registered with the Scottish Land Registry directly, we maintain our own private records and take our arrangements with our Lords and Ladies very seriously.

Or, you could think bigger: the International Star Registry is still in operation. Ad astra!

Governments that tax economic activity rather than economic INactivity can be viewed as land companies in which land title owners are life-annuitants with the annuities paid in the form of inflation-adjusted use fees going toward law enforcement service protection of the owner’s control of the land. “life”-annuity because death is viewed as an economic activity, hence taxable. Land is a particularly attractive long-term investment under such governments because the positive network externalities that originate civilization’s power not only fall in large measure on land value, but the economic activities that are taxed subsidize the protection of the land owner’s title, thereby lowering the principle the life-annuitant must pay for the annuity. The psychology of land company scams takes advantage of this market distortion since everyone sort of “gets” at some level, that the tax basis is wrong.

Land is a particularly attractive long-term investment under such governments because the positive network externalities that originate civilization’s power not only fall in large measure on land value, but the economic activities that are taxed subsidize the protection of the land owner’s title, thereby lowering the principle the life-annuitant must pay for the annuity.

Should we then move in the direction of Georgism (a single tax on the value of land)? It’s always seemed to me that this works less and less well as economic activity becomes increasingly decoupled from the possession of land: how much land does it take to operate a company such as Google or Apple as opposed to agriculture?

Short of going all Lysander Spooner on you, the short answer is to replace the current fiat monetary system with Property Money, thereby privatizing the rest of government services.

My earliest thinking, back in the 1980s was along Georgist lines, but my involvement with enacting into law the Reagan administration’s policy of commercializing space launch services brought me into contact with George Gilder’s polemical supply-side economic apologetics. Gilder struck me, as a young engineer attempting to form a family, as viciously betraying his initial foray into the conservative literati with his book titled “Sexual Suicide” (subsequently reissued as “Men and Marriage” when he became a Reagan polemicist). I was seeing similar betrayals of young men going on in the conservative clergy resulting in the mendacious “Promise Keepers” organization for young men, the unspoken premise of which was that the demographic hole the size of the grand canyon being blown in the Nation of Settlers was all their fault. Hence the aforelinked video’s description “a deadly embrace forms between a corrupt secular and a corrupt religious magisteria”.

But Gilder’s egregious betrayal of his own prior work on family formation gave me a clearer perspective on the essence of what what was going wrong with the conservative movements (religious and secular) at that point. So once we got the Launch Services Purchase Act of 1990 passed – enacting Reagan’s space policy – and Congressional staffers who had gone to bat for me were asking me “Where’s all that capital investment you said was going to show up?” I had a moral obligation to diagnose the capital market failure, having struck what I thought was a fatal blow against the technosocialist Dragon’s hoarding of technological potential gold.

As a result, in 1992 I used up what (very) little political capital I had within the beltway to get some thinktank economists to review a (Gilder-style polemic) “white paper” I wrote titled “A Net Asset Tax Based On The Net Present Value Calculation and Market Democracy”. The proposal was a far less radical reform than Property Money:

The government should tax net assets, in excess of levels typically
protected under personal bankruptcy, at a rate equal to the rate of
interest on the national debt, thereby eliminating other forms of
taxation. Creator-owned intellectual property should be exempt.
…
With the exception of basic functions of government and the pay
down of debt, the government budget should be dispersed to
citizens as cash, rather than being spent in government programs
or even limited in the form of vouchers. This is “market
democracy” in which the citizens and their markets, rather than
central planning and politics, influence the selection of goods
and services to be capitalized and provided.

I even had a section titled “A Critique of Henry George”.

Watching my dire predictions for the TFR of the Boomers and the fate of the middle class come relentlessly true in the subsequent 3 decades, I have become far more radical in my thinking, hence Property Money, thence “Militia Money”.

Every bottle of Laphroaig comes with an official looking certificate and identifier to your own personal “plot of peat”. You login to their website and you can register (link) and then you would “officially” own a square foot of peat (bog?).