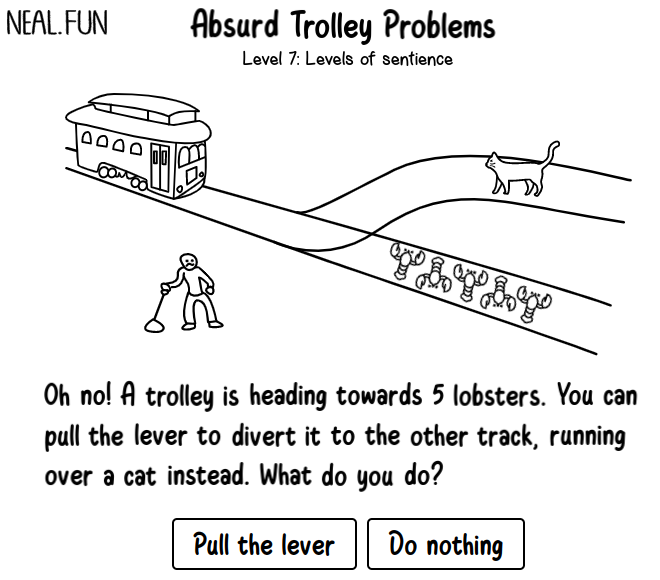 The Trolley Problem is a thought experiment in psychology and ethics in which a person is asked to make a choice whether to intervene to save the lives of multiple people when acting will cause the loss of one life which would be spared by not acting. It is formally stated as:

There is a runaway trolley barreling down the railway tracks. Ahead, on the tracks, there are five people tied up and unable to move. The trolley is headed straight for them. You are standing some distance off in the train yard, next to a lever. If you pull this lever, the trolley will switch to a different set of tracks. However, you notice that there is one person on the side track. You have two (and only two) options:

Which is the more ethical option? Or, more simply: What is the right thing to do?

The dilemma confronts the utilitarian view that acting to preserve the largest number of human lives with the knowledge that to act directly causes the death of one person. It can be used to illustrate philosophical viewpoints such as eternalism (a “block universe” as modeled by general relativity where the past and future are equally fixed), the many worlds interpretation of quantum mechanics, where all possible outcomes occur, and the presence of free will or its being an illusion.

Many variants of the trolley problem have been created to test individuals’ decision making and value judgements. Many of these, along with a variety of humourous situations, have been collected at the Neal.fun Web page, “Absurd Trolley Problems”, where you are confronted with a series of dilemmas and, for each, compare your decision with that of the millions of people who have visited the page. At the end of the series, your body count is shown.

Do you consider that lobsters are probably tastier than cats?

Pull the lever. Because:

In the US, active participation is likely to invite a lawsuit, so for an average person the best policy may be to stay protected by “Bystander doctrine” by doing nothing. There may be a duty to call the ambulance or police.

[Rescue Without Law: An Empirical Perspective on the Duty to Rescue, Texas Law Review, vol 84, 2006]

Since the topic has come up, I thought I’d pass along the list I have of state statutes that impose a duty to rescue crime victims, or report crimes. This might help people see the different ways these duties have been crafted in the past — generally...

My solution is to grab the nearest utilitarian moral philosopher(s) who sets up trolley problems, and use their body(ies) to stop the trolley before it hits anyone I might actually care about.

– Sponsored by the Committee to Eliminate Trolley Problems

There may be a duty to call the ambulance or police.

When I worked in EMS they taught us that duty to act varied by state when you were off-duty. The standard for lay people is a lot lower. The Good Samaritan laws supposedly protect you when acting in good faith, although I don’t know how those would affect a good lobster dinner vs a flat cat.

The most reasonable solution, should you have the ability to change things is to flip the switch half-way so the trolley derails and doesn’t run over anybody.

“The correct answer to the trolley problem? Shoot the philosopher. Trust me on this: if you find yourself in one of these convenient no-win scenarios, it’s because some son-of-a-bitch set it up that way, and taking them out will inevitably save more lives in the big picture.” 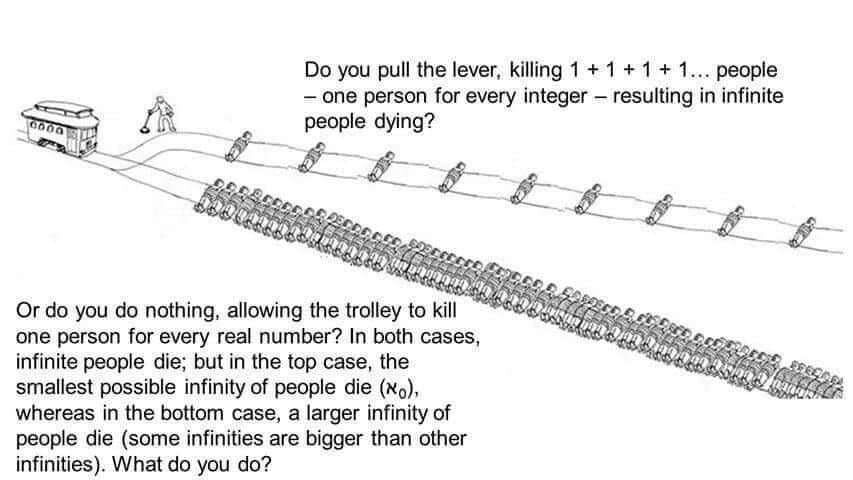 Pull the lever. Between each of the people killed on the top track, you have saved more people on the bottom than can be accommodated in a (countably) infinite number of Hilbert hotels.

Of course, if you’re paying the hotel bills for those you save, your answer may differ.

What is it about trolleys that turns otherwise mild-mannered ethicists into Batman villains?

Original 1967 paper that defines the trolley problem. I’m a bit surprised that it is as late a date as it is.

P Foote, “The Problem of Abortion and the Doctrine of the Double Effect”, in Virtues and Vices (Oxford: Basil Blackwell, 1978). Originally appeared in the Oxford Review , Number 5, 1967.