In the largest commercial launch deal ever, Amazon is purchasing up to 83 launches from Arianespace, Blue Origin and United Launch Alliance to deploy most of its 3,236-satellite Project Kuiper broadband megaconstellation, contracts worth several billion dollars.

Amazon announced April 5 the agreements to launch an unspecified number of satellites on Ariane 6, New Glenn and Vulcan Centaur rockets over five years. The launches are in addition to nine Atlas 5 launches it purchased from ULA a year ago. Amazon did not disclose financial terms but said it is spending billions of dollars on these contracts as part of the constellation’s $10 billion overall cost.

Amazon is buying 38 Vulcan launches from ULA. The agreement includes additional investments in launch infrastructure to support a higher flight rate, such as a dedicated launch platform for Vulcan launches of Kuiper satellites. ULA will make its own investments to support processing two launch vehicles in parallel.

The Arianespace deal includes 18 Ariane 6 launches, a contract that Stéphane Israël, chief executive of Arianespace, described in a statement as the largest contract in his company’s history. Blue Origin is selling 12 New Glenn launches with an option for 15 more.

Amazon needs many launches quickly to meet requirements of its Federal Communications Commission license awarded in July 2020. That license requires Amazon to have half its satellites in orbit by July 2026 and the complete constellation in orbit three years later. The spokesperson representing Amazon told SpaceNews that the contracts keep the company “on track to meet deadlines set forth in the FCC license.” 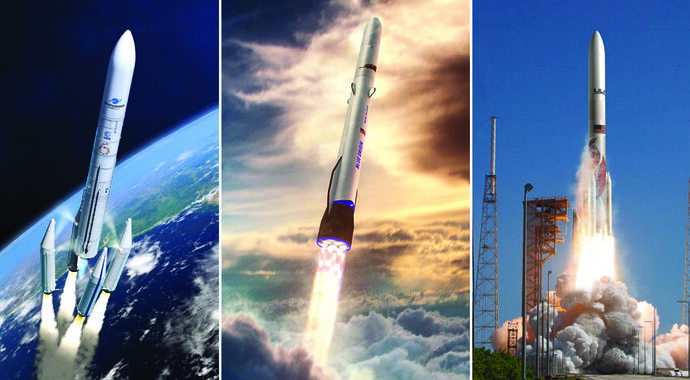