The object ʻOumuamua, detected in 2017 by the Pan-STARRS telescope in Hawaii, was the first body passing through the solar system to be unambiguously identified as of interstellar origin—its velocity was so great it was not bound to the Sun and there is no plausible mechanism by which a solar system body could be accelerated to such a speed.

But investigation of the NASA/JPL CNEOS catalogue of meteor events allowed Harvard astronomers Amir Siraj and Abraham Loeb to identify a meteor observed to burn up in Earth’s atmosphere on 2014-01-08 at 17:05:34 UTC as definitively of interstellar origin, as reported in their 2019 paper “Discovery of a Meteor of Interstellar Origin”. Here is the abstract.

The first interstellar object, `Oumuamua, was discovered in the Solar System by Pan-STARRS in 2017, allowing for a calibration of the abundance of interstellar objects of its size ∼100 m. One would expect a much higher abundance of smaller interstellar objects, with some of them colliding with Earth frequently enough to be noticeable. Based on the CNEOS catalog of bolide events, we identify the ∼0.45 m meteor detected at 2014-01-08 17:05:34 UTC as originating from an unbound hyperbolic orbit with 99.999% confidence. We infer that the meteor had an asymptotic speed of v_{\infty}\sim 42.1\pm 5.5\ {\rm km\ s}^{-1} outside of the solar system. Its origin is approximately towards R.A. 49.4\pm 4.1^∘ and declination 11.2\pm 1.8^∘, implying that its initial velocity vector was 58\pm 6\ {\rm km\ s}^{-1} away from the velocity of the Local Standard of Rest (LSR). Its high LSR speed implies a possible origin from the deep interior of a planetary system or a star in the thick disk of the Milky Way galaxy. …This discovery enables a new method for studying the composition of interstellar objects, based on spectroscopy of their gaseous debris as they burn up in the Earth’s atmosphere.

Now, in a letter dated 2022-03-01, the U.S. Space Command has confirmed, based upon classified data from an unspecified source, that the object was, indeed, on a hyperbolic trajectory indicating interstellar origin. 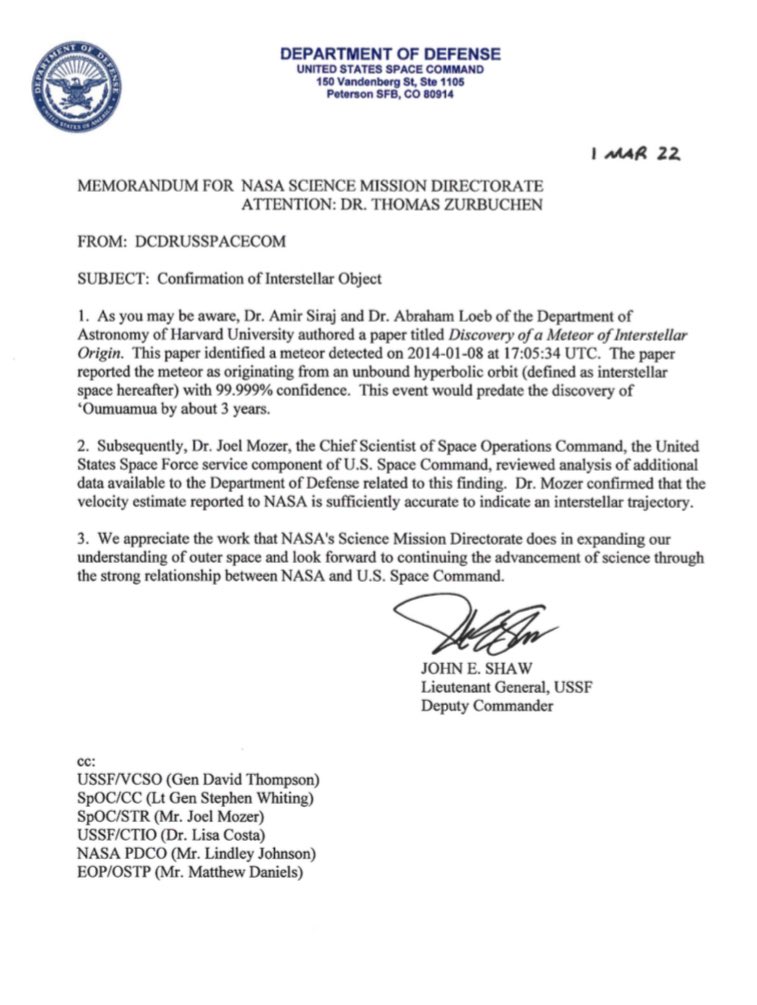 Thus. meteor monitoring camera and spectrographs may allow monitoring the composition of interstellar objects which end their long journey through the galaxy by slamming into the Earth.