Astra Space plans to launch the third commercial mission of their Rocket 3.3 small satellite launcher (yes, the rocket is named “Rocket”) on 2022-02-05 in a three hour launch window between 18:00 and 21:00 UTC. This will be the first Astra launch from Cape Canaveral; the rocket is designed to be launched from a flat concrete pad with all equipment and supplies delivered in containers shortly before launch. Weather is forecast as 60% favourable for launch.

The mission is under contract to NASA’s ELaNa “Educational Launch of Nanosatellites” program and is designated ElaNa 41. It will launch four CubeSats into a 500 km low Earth orbit at 41° inclination. One of the satellites, developed at the University of Alabama, is intended to demonstrate deployment of a lightweight drag sail which satellites can use to safely deorbit at the end of their operational life to reduce the hazard of space junk.

Here is the pre-launch preview from Everyday Astronaut.

Today’s countdown was called off 15 minutes before launch due to a failed piece of range equipment (they didn’t specify what it was, but that’s the responsibility of the range, not the launch provider). There is another launch opportunity tomorrow, 2022-02-06, so if if the problem is resolved they may be able to try again then.

Astra has issued a statement confirming that the launch was scrubbed due to failure of a range radar, which caused to range to “go red”. The next launch attempt will be no earlier than Monday, 2022-02-07 with the same launch window: 18:00 to 21:00 UTC.

Today’s (2022-02-07) launch attempt was aborted an instant after engine ignition, with a safe shutdown of the engines. The abort occurs at the 1:49:21 mark in the video replay in the previous comment. The countdown was recycled to T−15 minutes pending analysis of the problem, and after another hour or so they announced the attempt had been scrubbed for the day. The reason for the abort was described as a “minor telemetry issue”. No date and time for the next launch attempt has as yet been announced.

Here is the live stream for today’s Astra launch attempt. The launch window opens at 20:00 UTC. Astra frequently launches some time after the start of the declared launch window. When that is the case, the live stream start may be delayed to an estimated one hour before launch.

The launch was a failure. I have cued the replay to start one minute before liftoff, at the 58:15 mark in the Webcast.

@Kemp
We experienced an issue in today's flight. I'm deeply sorry we were not able to deliver our customer's payloads. I'm with the team looking at data, and we will provide more info as soon as we can.

Oh dear, an issue. Thank goodness it wasn’t an anomaly! (Note the idiot apostrophe in the tweet—they had four customers, not one, so it should have said “customers’ payloads”.) 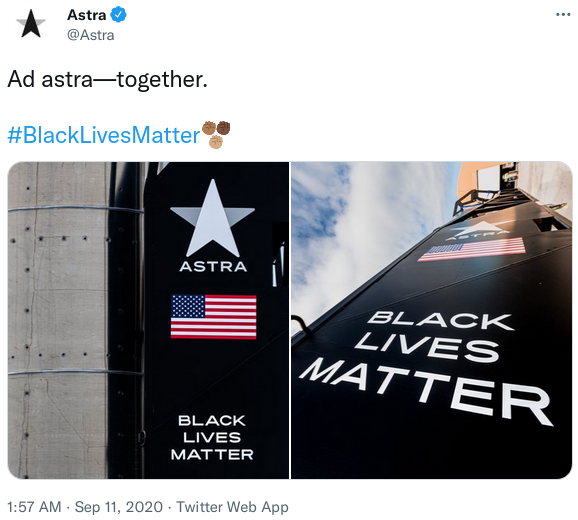 Astra Space, you’ll recall, is the company who, on 2020-09-11 tweeted that they’d painted the name of a racist movement on their launch tower.

Here is today’s stock chart for Astra Space (ASTR:NASDAQ), The times in the chart are U.S. Eastern Standard Time, in which the launch occurred at 15:00. 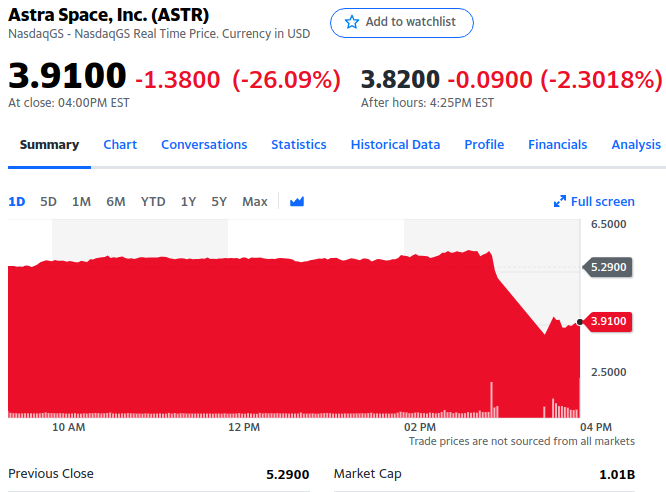 @KathyLueders
Although today’s launch with @Astra did not go as planned, the mission offered a great opportunity for industry developing new launch capabilities, and CubeSat developers – including colleges and universities – to gain valuable experience building small satellites. (1/3)

And I guess part of the “valuable experience building small satellites” would be “always build a spare or two, because you never know…”.

Interesting that the third flight of SpacEx Falcon 1 failed because of an issue with the second stage getting knocked into a spin by an unanticipated residual push from the first stage. Solution was simply to add an extra four seconds between main engine cut off and stage separation.

SpacEx managed to recover from the Flight 3 disaster. Hopefully, Astra will be able to recover also. Perhaps this loss is their punishment for supporting the racists of BLM?

The fairing failure to deploy is reminiscent of the Indian Space Research Organisation PSLV-XL/IRNSS-1H launch in August, 2017. The fairing failed to jettison and continued to fly atop the final stage with the payload inside. Unlike the Astra rocket, where the second stage is inside the fairing, the PSLV fairing only encapsulates the payload, so the fairing did not interfere with the upper stage’s firing. However, the added weight kept the launcher from achieving the desired orbit and left the satellite in a useless orbit. At the scheduled time, the satellite separated from the final stage and bounced around uselessly inside the still-closed fairing. There was a video of the forlorn satellite bumping the fairing, but the replays of the launch I’ve found on YouTube do not show this.