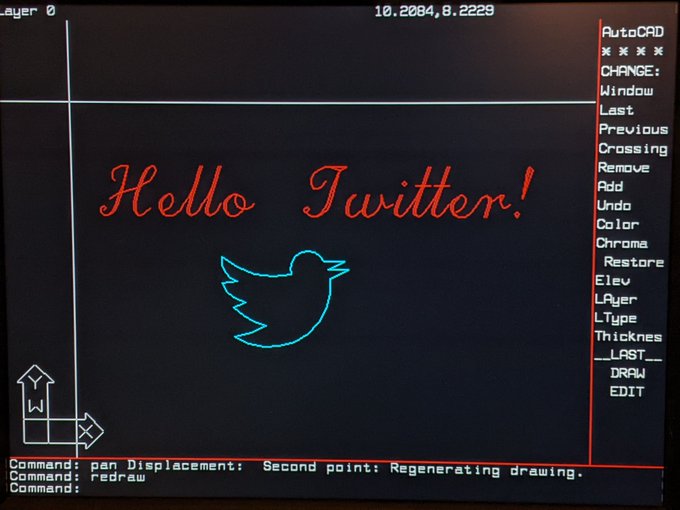 The IBM Professional Graphics Controller (PGC) (which was often incorrectly called a PGA, for Professional Graphics Adapter, by many people, including me) was a remarkable device for its time. Introduced in 1984, around the same time as the PC/AT, it was compatible with both the original IBM PC and XT as well as the AT. It supported 640×480 pixel 60 Hz graphics with a 256 colour palette of 8-bit RGB values and had 320 kB of on-board display memory, so it occupied none of the scarce 640 kB address space of the PC architecture. It had its own Intel 8088 microprocessor (the same as in the PC and XT) which implemented high-level graphics commands such as drawing arcs and circles and solid filling polygons. This allowed AutoCAD to offload all of the pixel-pushing to the graphics board, speeding up image regeneration.

This power came a a price—a forbidding one. List price for the PGC, which consisted of three printed circuit boards stacked together, was US$ 4,290 in 1985, which is equivalent to US$ 11,000 in today's BidenBucks. This was comparable to the price of an entire IBM PC/XT, which was US$ 4,995 in 1985. This thing was so expensive that I doubt Autodesk would have bought one to support it if IBM hadn't loaned us one to develop a driver. After developing an AutoCAD driver for it (which was a breeze thanks to the on-board graphics primitives), I later used the board in the development of AutoShade, as it was one of the few 256 colour boards available at the time.

Here is a long Twitter Thread from Tube Time (scroll back to the start), who recently restored an IBM PC/AT which probably belonged to an AutoCAD customer back in the day and got AutoCAD Release 10 (which shipped in October 1988) running on it.

From 1992 though 2019 I taught AutoCAD Saturday mornings at a Hudson Valley , New York community college. Starting with Release 12 MS-DOS which has similiar interface to Release 10. It was very exciting & rewarding to help people in their career development, and introduce people to the internet in the early 90s!

Hi, though I did not start AutoCAD on my Commodore VIC-20 (!), I remember with emotion that first time I had my own computer. Expensive hardware yes but worth it !

The omnipresence of microcomputing nowadays doesn’t surprise anyone anymore. But there was a time, not so long ago, when all this was in its infancy, and when we were not talking about megabytes, let alone gigabytes. I’m talking about 1983. The year...