“Automotive as a Service”—Car Features by Subscription

Hackaday reports, “New Cars Will Nickel-and-Dime You – It’s Automotive as a Service”.

As reported by The Drive, many Toyota customers have only just realised that the key fob remote start feature in their vehicles is only enabled if they maintain a subscription to Toyota’s Connected Services. The issue has been masked thus far, as it only effects cars built from 2018 onwards, and Toyota provides most drivers with a free 3-year subscription, extended to 10 years for those that spring for the Premium Audio package.

Luxury brands have jumped on the bandwagon, too. The new EQS luxury electric sedan from Mercedes-Benz comes with rear-wheel steering. However, it’ll only steer up to 4.5 degrees unless you pony up some extra cash. As reported by Autoblog, if you want the full ten degrees of operation from the system, you’ll have to pay an annual fee of €489. The hardware to do the full level of steering is in every car; Mercedes has just decided that for the German market at least, you’ll have to pay extra to get the most out of it.

BMW and Audi are getting involved too with their own takes on functions-on-demand. BMW are trialling an annual fee system for remote start and a integrated dash camera, while also contemplating asking drivers to regularly fork out for simple things like heated seats and steering wheels that are already built into the car. Audi, meanwhile, will offer higher-speed data connections as well as improved vehicle lighting operation for those who sign up for a regular payment.

Tesla has disabled the autopilot feature purchased with a one-time payment by the original owner of a car when it was resold as a used car because the new owner “ ‘did not pay’ for the features and therefore is not eligible to use them”.

As with all of these “connected” features, one wonders how long the vendors will maintain the servers that enable the subscription servers. Toyota owners are currently discovering their premium features are being disabled because their cars communicate via 3G mobile networks which are being shut down by carriers. 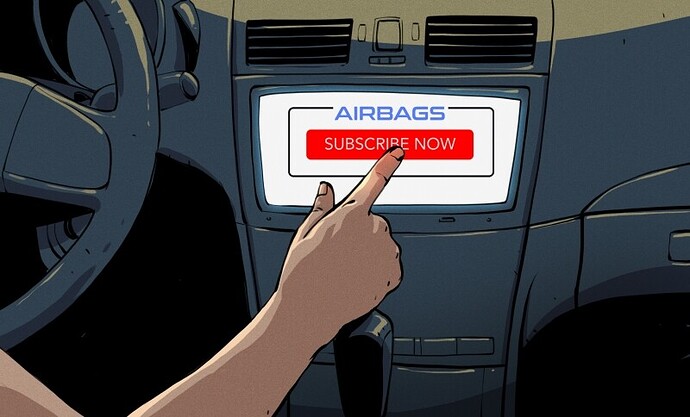 I get the desire for profit, but some of the behavior is downright piratical. Time for hackers to find an “alternate” solution, much as “chipping” a car can now be done without the dealer, so at much lower a price. Audi 4’s with the handling package, paddle shifters, and a 4-cyl turbo engine could be chipped to give much better response than the 6, but were about $4,500 cheaper. A “chipping” cost you $500.

We won’t have to worry about this for long. The woman who is the UK Minister of Transport has come clean about plans to get the peons out of their cars and have them “standing in the English rain” (to quote John Lennon) waiting for that long-delayed Number 39 bus. Future car owners complaining about the fees they are being charged by Mercedes Benz will get as much sympathy as Barrack Obama complaining about the high price of arugula.
UK Inches Closer To Eliminating Private Car Ownership | ZeroHedge

Just imagine the intrusive possibilities of “black boxes” = event data recorders (EDR’s) in cars. Linked with GPS, these permit almost limitless possibilities of regulation and ransom for various politically incorrect driving behaviors. Many cars are already equipped with them. Who knows what can already be done with them?

Many cars are already equipped with them. Who knows what can already be done with them?

Tesla is already monitoring the behaviour of drivers and phoning home to headquarters, which computes a “safety score”. When they were rolling out “full self-driving”, they initially limited it to customers with a perfect safety score. I wrote about this on 2021-09-26, “Tesla ‘Safety Score’ to Spy on Customers’ Driving Behaviour, Phone Home”.

Well, when you wish to go rogue, ripping the anti off your car would be important. Before driving over that spy devise in your pocket.

The rationality of this decision seems backwards. If the goal is to improve safety, logic suggests taking those with a poor “safety score” out of the driving loop. Maybe - as is the case with most large organizations nowadays - the reasons stated are not the real ones. I know - shocking!

Not to mention the ability to tax the peon per mile driven, maybe with a surcharge for average speed. Since government regulation plays a bigger part in the design of vehicles than most of us realize, it would be smart for bureaucrats to have slipped the capability to report distances and speeds into some rule that the public never learns about.

The Usual Suspects are very keen on shutting down gasoline and diesel vehicles, which pay significant tax on the fuel. The “replacement” Electric Vehicles don’t pay that tax. From the standpoint of grasping government – That kind of freeloading cannot stand!

GM has had OnStar for a long time. Corvette owners who visit Corvette Forum are treated to an in-depth article on how to totally remove ALL the sensing and reporting ability - because you can’t just remove the box that says OnStar. You have to go into the wiring harness and take out numerous imbedded parts.

Cops have already begun accessing OnStar data in accidents and other situations, so it’s not coming - it’s here.

Unfortunately removing those witth “a poor ‘safety score’” is a made-up function, not related to real safety.

We need first to acknowledge that traffic laws are merely revenue sources, not “safety” measures. That ought to be obvious just with the observation that most speed limits are the same or about the same, as those my father faced in his 1954 Olds 98. If you don’t believe cars have progressed in the intervening 70 or so years, you just haven’t been paying attention.

Second, you should know that the ONLY study on accident rate vs speed was done a number of years ago - by no less than the California State Police. They found that posting the limit at the 85th percentile of what people actually drove led to the fewest accidents. This is based upon the well known principle of disparity of speed being the biggest worry. So those who are comfortable will drive at what is comfortable for them, regardless fof the speed limit. Others mindful of “the law” will attempt to drive the speed limit. Setting that speed limit to the 85th percentile leads to the least speed disparity; higher or lower limits lead to either those who are mindful of the law driving faster than they are comfortable with or wider speed disparities. Setting speed limits to the old “reasonable and proper” would allow the fast guys to run in the open between-cities stretches comfortably.

Of course setting speeds to these kind of limits would greatly inhibit the government revenue collection cars and trucks have proven to be, so the likely hood of change is pretty much non-existent. Notice that the German Autobahn doesn’t seem to yield exceptional rates of accidents, and they have Porsches and MB’s (not to mention the occasional Kawasaki) running 140-160 MPH regularly. And the Autobahn seems somewhat “congested“ in comparison to runnin in rural Illinois, Wisconsin, North or South Dakota, Oklahoma, much of Texas, New Mexico, Montana, Wyoming - I could go on, but you get the point.