In Germany, some doctors prescribe and health insurance pays for “radon inhalation therapy” to treat chronic pain. Here is the brochure for the ACURADON healing tunnel in Bad Kreuznach, Germany.

Does it work? How? What is the cancer risk? Here is a meta-analysis published in the International Journal of Molecular Sciences in December 2020, “Radon Exposure—Therapeutic Effect and Cancer Risk”, full text [PDF]. Here is the abstract.

Largely unnoticed, all life on earth is constantly exposed to low levels of ionizing radiation. Radon, an imperceptible natural occurring radioactive noble gas, contributes as the largest single fraction to radiation exposure from natural sources. For that reason, radon represents a major issue for radiation protection. Nevertheless, radon is also applied for the therapy of inflammatory and degenerative diseases in galleries and spas to many thousand patients a year. In either case, chronic environmental exposure or therapy, the effect of radon on the organism exposed is still under investigation at all levels of interaction. This includes the physical stage of diffusion and energy deposition by radioactive decay of radon and its progeny and the biological stage of initiating and propagating a physiologic response or inducing cancer after chronic exposure. The purpose of this manuscript is to comprehensively review the current knowledge of radon and its progeny on physical background, associated cancer risk and potential therapeutic effects.

This is the conclusion:

In summary, experimental research on the effects of radon exposure is needed on multiple levels. For risk assessment related to different exposure scenarios including therapeutic application, the estimations of organ doses and mechanisms of intake and elimination of radon and its progeny have to be underpinned with more solid experimental measurements. The clinical applications have to be further analyzed in high quality and placebo-controlled trials, accompanied by biomedical investigations, to increase the level of evidence of the therapy as well as for assessment of potential side effects. This will help not only the patients directly in enhancing their mobility, but also might have a positive socioeconomic effect for an aging population.

but also might have a positive socioeconomic effect for an aging population.

Do you suppose I could charge to allow folks to inhale the output of my two radon mitigation fans which pump air from beneath the slab floor of my basement and from under the visqueen sheets covering my crawl space. I wonder how much this costs me in additional heating during winter. I gave up on paying for individual mail-in radon measurement devices. Instead, I bought a meter which measures it real time and gives me a current and cumulative average readout. Naturally, the state has increased regulation of such mitigation devices. Now, they must exhaust above the roof line. It is no longer adequate to simply vent to the outside of the foundation at ground level.

It is fascinating to wander through an old grave yard, looking at the dates on 19th Century grave stones. OK – the people who got granite grave stones may not have been representative of the population at large, but they were probably also the ones who lived in well-built houses with basements. Yet many of them lived into their 70s, 80s, 90s!

It makes one wonder!

Life expectancy statistics may somewhat misrepresent reality when used promiscuously. For example, comparing life expectancy including all live births with those for individuals who have survived to one year of age, offer a different picture due to higher mortality during the early years of life. What this means is that in the past - prior to modern medical advances reducing infant mortality - more people lived to ripe old ages than one might expect based on life expectancy of all live births. Once one survived childhood prior to the 20th century there were more survivors into old age than the raw life expectancy statistics might imply (sorry, I lack the time to expand on this with actual numbers).

Certainly agree with that, CW. The 20th C increase in “average” life expectancy seems mainly to have been driven by reductions in infant mortality, death in childbirth, industrial accidents, etc. That is why I find the headstones in old graveyards so interesting – some people back in the Bad Old Days lived to ripe old ages. Modern sanitation (mainly) and medicine (lesser factor) have enabled a larger fraction of people to reach their natural life span – but do not seem to have done much to increase that natural lifespan.

Back to those long-dead long-lived guys with then-unknown Radon spilling from their basements: What makes us so sure that low-level exposure to Radon is really such a bad thing that it must be avoided at all costs?

I thought I had read that the life expectancy for those that made it to 65 had not changed. When I tried to find this article, I ran across this study from Stanford which concludes that between 1960 and 2010 both males and females have continued to live longer.

The 2010 deaths at 65 would be born in 1945. A death of a person at the middle of the distribution approximately 90 was norm in 1920. That group probably benefited greatly from heart surgery and other treatments being widely available while still being in good physical shape.

I will be surprised if this will continue given obesity. Maybe it already has reversed since 2010. My guess is that like so many other deteriorations this will deteriorate for people born around 1970. 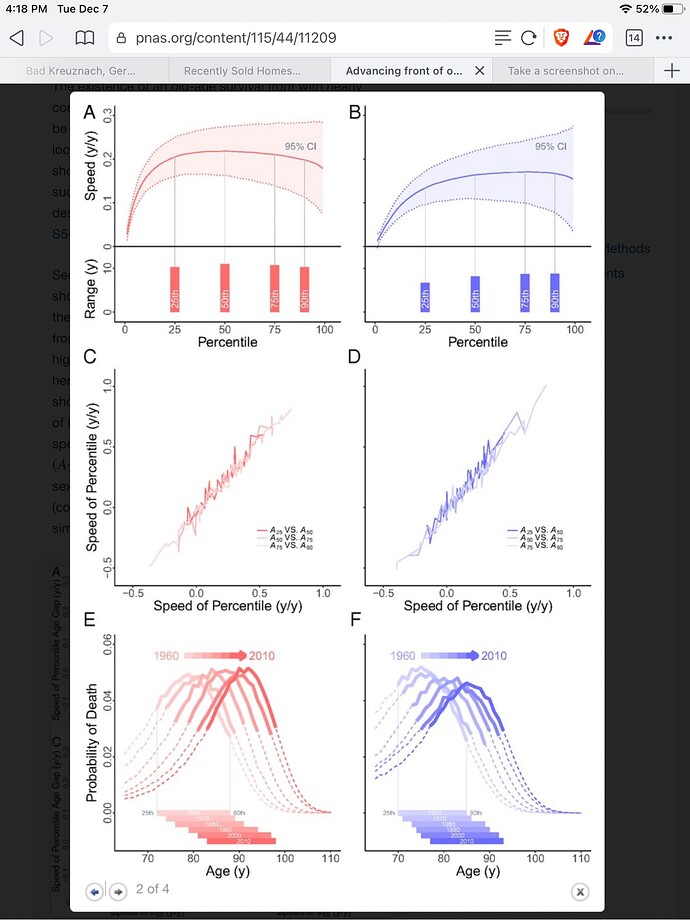 Not to go off on a tangent (he said, going off on a tangent), but I find the authors of that statistical study in the Proceedings of the National Academy of Sciences of the United States of America to be interesting.

The optimists tell us one of the strengths of the West is the superiority of our academic institutions. Certainly, the buildings are located in the West. Should we be paying more attention to where the brains inside those buildings are coming from? A pessimist might say that the West is falling behind in what really counts.