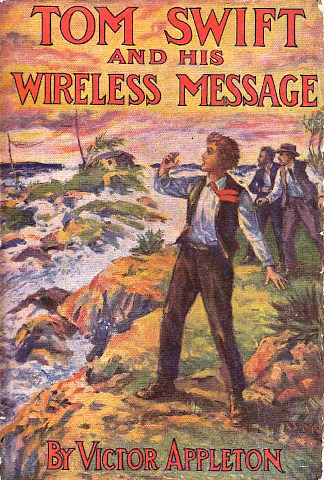 All 25 of the public domain Tom Swift novels have been posted in the Tom Swift and His Pocket Library collection. I am now returning to the earlier novels, upgrading them to use the more modern typography of those I’ve done in recent years. The sixth novel in the series, Tom Swift and His Wireless Message, has now been updated. Several typographical errors in the original edition have been corrected, Unicode text entities are used for special characters such as single and double quotes and dashes, and the HTML version is now XHTML 1.0 Strict.

An EPUB edition of this novel is now available which may be downloaded to compatible reader devices; the details of how to do this differ from device to device—please consult the documentation for your reader for details.

This novel was published in 1911, the first of five Tom Swift adventures which the Edward Stratemeyer industrial-scale young adult fiction factory would produce that year. It was prescient, telling the story of a rescue of castaways at sea by sending a radio message with a spark-gap transmitter a year before the Titanic sinking. Tom uses the original “CQD” (Come Quick—Danger) message, which was the first to be sent by the Titanic before it switched to the new-fangled “SOS”.

This novel sets the stage for the next adventure, Tom Swift Among the Diamond Makers, published shortly thereafter.

And yes, the eccentric Mr Wakefield Damon not only exclaims “Bless my gizzard!” in the story, he does so five times!