Update: After two postponements of the originally scheduled launch date of 2022-08-31 and a long delay for reasons I did not hear explained, Blue Origin has rescheduled the NS-23 launch. I have updated the description below and embedded a video player for the live stream of this event, should it actually happen this time.

Blue Origin’s New Shepard suborbital space vehicle is scheduled to lift off at 13:30 UTC on Monday, 2022-09-12. (New Shepard countdowns tend to have holds at seemingly random times for undisclosed reasons, so take that time as a “no earlier than”.)

This will be Blue Origin’s fourth flight of 2022 and the 23rd New Shepard flight, the ninth for this NS4 booster. Everyday Astronaut has a pre-flight preview with additional information.

This flight will carry no passengers. Instead, it is a dedicated payload flight, the first such since NS-17 in August 2021. The capsule is configured for and dedicated to all-payload flights. A total of 36 payloads are on board, including two on the exterior of the vehicle to expose them to the space environment. Eighteen are funded by NASA, most by the Flight Opportunities program. Twenty-four payloads are from schools, universities, and other education-focused organisations. Here are more details from Blue Origin.

At 64 seconds into the flight, the flame from the booster underwent a sudden change, appearing bright as if something other than hydrogen and oxygen were burning and it looks like the booster veered a little off course, to the left from the tracking camera’s viewpoint. Within a second, the capsule’s abort motor fired, pulling the capsule away from the booster. The live stream camera followed the capsule as it went to apogee, deployed its drogue parachutes then main parachutes and made a normal landing. There was no further imagery of the booster or commentary about its fate. As no landing was shown, one suspects it is now a twisted wreck on the desert. The live stream was ended shortly after the capsule touched down.

I have cued the replay of the live stream to start one minute before launch. 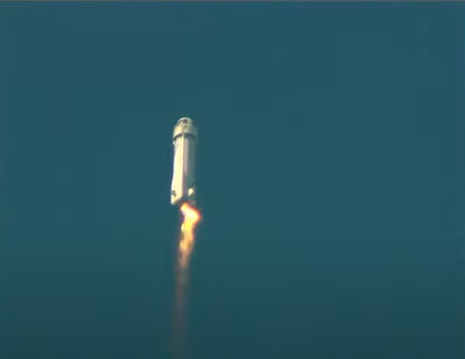 Bright flame spreads to left of base of booster. Apparent debris shedding event. 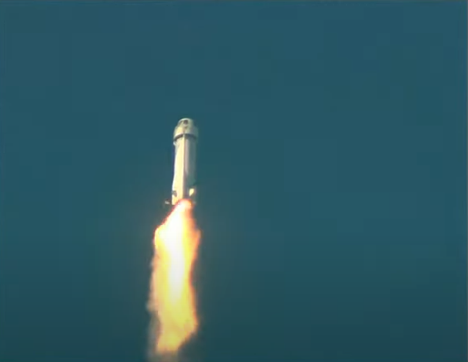 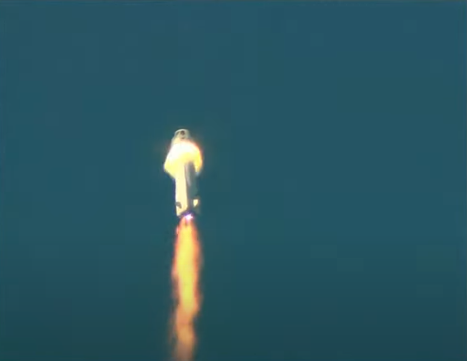 As no landing was shown, one suspects it is now a twisted wreck on the desert. 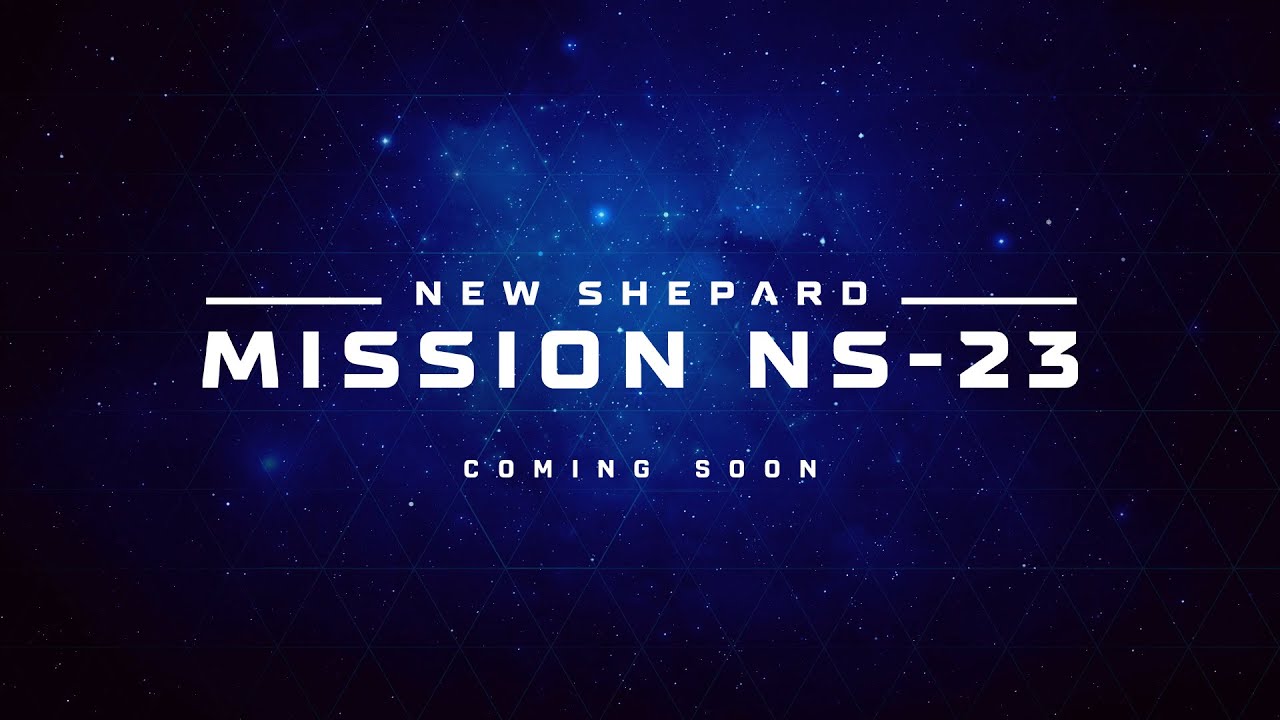 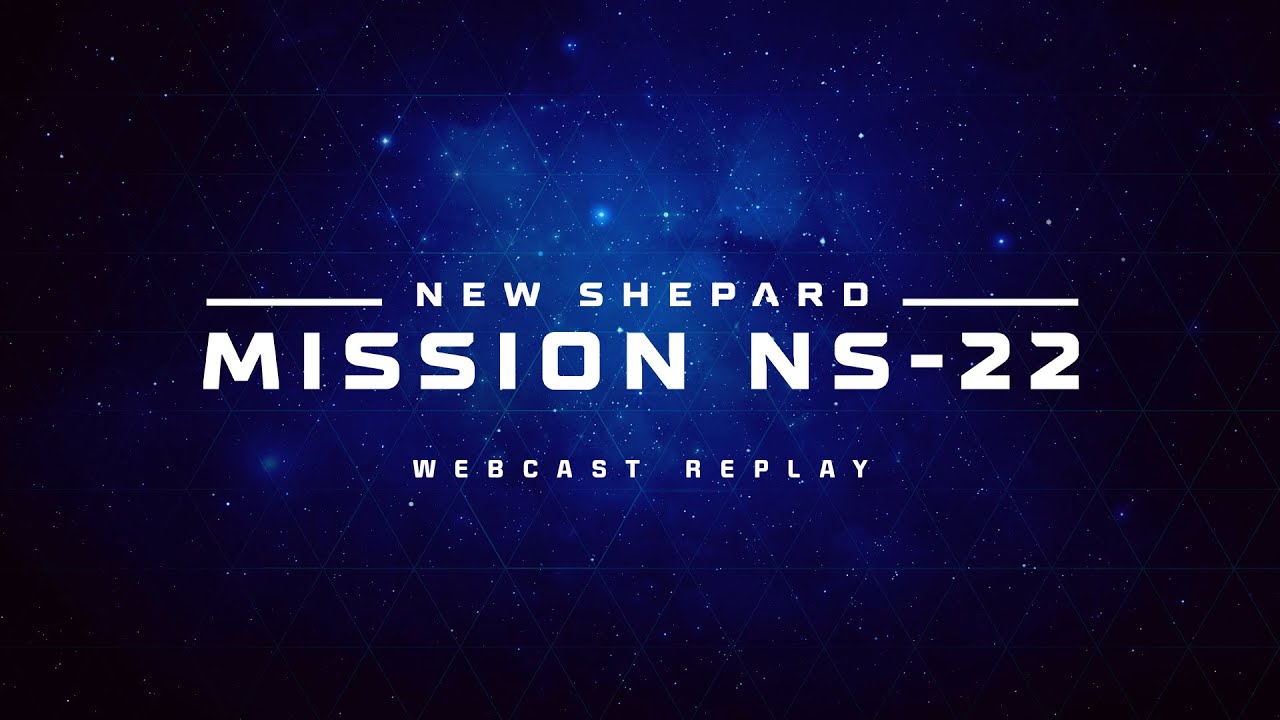 I was speaking of the booster, not the capsule. In my comment #5 I said,

The live stream camera followed the capsule as it went to apogee, deployed its drogue parachutes then main parachutes and made a normal landing.

and then went on to discuss the booster, which we never saw again after the capsule pulled away from it. Presumably there was another camera tracking the booster, but we haven’t yet seen anything from it.

It’s also interesting that the abort happened while they were showing a split screen of the rocket from the ground and a look downward from (I assume) the capsule. When the strange stuff started to happen in the engine plume, nothing was visible in down-looking view and it looked to me like it may have frozen.

I’d really like to know the G rating experienced by the capsule during the abort. Would have been a heck of a ride if it had been crewed.

It looks to me like that what purports to be real-time telemetry is either pre-programmed or else bogus. At the moment the escape motor lights, which produces intense acceleration, the display starts to show “ZERO-G”, which is ridiculous. This continues until the escape motor burns out and continues to say zero G all through drogue deployment and operation when the capsule should be close to 1G after the initial deceleration.

The readout then switches at T+2:33 to show “Booster descent velocity 314 mph, Booster altitude 1929 ft", then freezes at booster altitude 425 ft. Then it jumps to show booster altitude 230,439 and ZERO-G, and the altitude continues to rise, but the booster velocity is frozen at 306 mph, which makes no sense because if the booster were rising in zero G, it should be decelerating due to gravity. Then they turn off the booster “telemetry” display and there is no further display until after the capsule touches down.

Bummer… good thing no one got hurt. Though I imagine future paying passengers may be now reassessing their priors on safety.

Will Jeff Bezos pull a Musk feat of personally investigating the crash and conditions leading to it? I assume not.

Looks more and more like Blue Origin and Kuyper LEO plans were a “passion project”.

It looks to me like that what purports to be real-time telemetry is either pre-programmed or else bogus.

Good catch. Wouldn’t surprise me if it turns out they were “modelling” the telemetry as the software wasn’t fully ready.

I’d really like to know the G rating experienced by the capsule during the abort.

In an article published after the flight test of the abort system in July 2018, Spaceflight Now quoted Ariane Cornell of Blue Origin as saying “Passengers would have likely encountered accelerations of up to 10 g during an escape motor firing like the one conducted Wednesday”.

This was the 9th launch of the NS4 booster (source)

According to the “book of knowledge”, this is the same booster that took Jeff Bezos and William Shattner up (source)

Irene Klotz of Aviation Week tweets a statement from the Federal Aviation Agency. 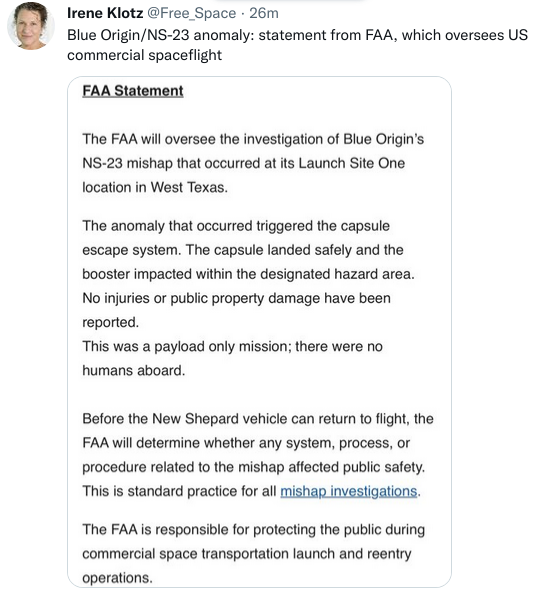 Note the statement “booster impacted within the designated hazard area”.

You would have to wonder if 10Gs for whatever period of time would be fatal to someone like Shatner who is in his 90s after all.

What is a “payload only” mission on a suborbital flight? A payload implies it was delivering a load somewhere. Is it simply that they did not want to label it a “test flight” since it had previously carried passengers? Marketing?