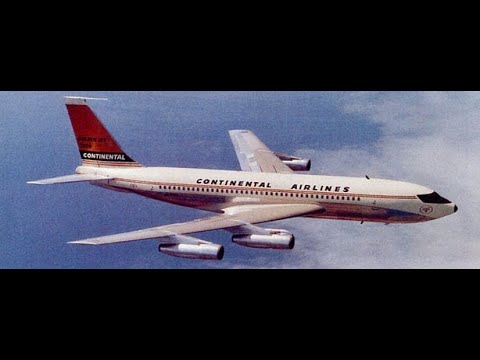 After the introduction of the Boeing 707 and Douglas DC-8 jet airliners, passengers wanted to fly on jets, not noisy piston engine propeller planes that flew through, not over, the weather. But the original jetliners were optimised for long-haul routes, and required longer runways than were available at many smaller airports.

Boeing responded by developing the Boeing 720, a 707 derivative with a shorter fuselage, modified wing, and lightened airframe, allowing it to operate from smaller airports. Two models were built: the original 720 powered by four turbojet engines, and the 720B which used newer turbofan powerplants.

As a 707 derivative, development and certification were straightforward, with the first flight in November 1959 and entry into service in July 1960 with United Airlines. A total of 154 720s were built, a small number compared to the 865 Boeing 707s manufactured, but due to its low development cost, the model was profitable for Boeing.

With four engines, the 720 was an expensive plane to operate and maintain, and after the introduction of Boeing’s clean-sheet short to medium range 727 three engine airliner, 720s were rapidly retired by their original customers. The planes continued to fly in secondary markets for many years, with the last, a flying engine testbed for Pratt & Whitney Canada, being retired in 2010.

Thank you – this brought back memories. My first flight on a jet was a Western Airlines Boeing 720B in 1964, SFO-SEA (there might have been a stop at PDX, I don’t remember). I’d previously been on a DC-6 and a DC-3 3 years earlier, and then a Lockheed Electra on Western SAN-SFO just before the jet. I recall the runway departure as being much more abrupt and a bit alarming! – so different from the prop planes. The return home flight a week later was also a Western 720B, SEA-LAX.

In the late 70s I flew on a 720B from Mexico City to Los Angles, although about all I remember of the flight is a long takeoff roll and starting to wonder if it was going to run out of runway