Out clearing trails today, so of course I saw these pure white creatures that can completely cover a beech sapper branch, so that it looks like it would in a snowstorm.
Except that if you agitate the branch a bit, the aphids all begin dancing. It’s like twerking, actually, they just shake their li’l booties. They look like they have one long antenna which they wave when they dance. That’s why they’re called boogie-woogie aphids.
And a little 8 year old friend and I noticed , standing under one extremely populated branch, a fine dew falling on us. Pee? Well, I reckon, since it means they took in more sap than they could retain, had to excrete it. But when aphids do it, it’s called “honeydew”. It’s kinda a dilute sugar water.
But what makes ‘em so white? They are the color of confectioners’ sugar. And when my BMD sawed down a branch which they were populating, a fine mist like flour dust or talcum powder appeared in the air as the vibration of the saw shook these creatures.

“The world is so full of a number of things,
I think we should all be as happy as kings!”
—RLS

But when aphids do it, it’s called “honeydew”. It’s kinda a dilute sugar water.

Some species of ants “ranch” aphids to harness the honeydew, which the ants store in their abdomens. When full, they return to the nest and regurgitate it to feed other members of the colony. The ants cannot directly use the sap of the plants as nutrients, so they rely upon their aphid “cattle” just as humans use cows to turn grass into milk and hamburgers.

The picture below was taken in the Fourmilab garden in July, 2003. It shows ants collecting honeydew from aphids on the leaf stem of a sunflower plant. This picture is from the “Aphid-Ranching Ants” section of the Animal Magnetism collection. 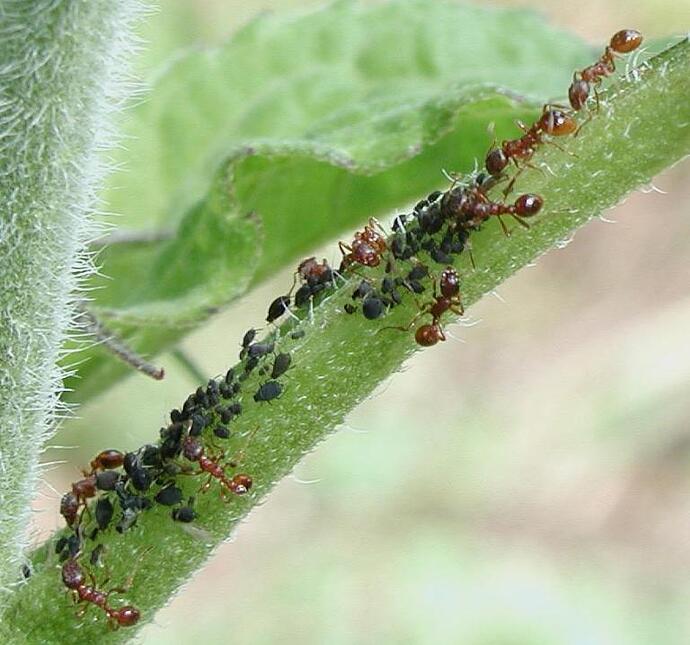 768×719 65.2 KB
This picture shows a ladybird chowing down on aphids on a nearby leaf. An ant, to the left, is trying to chase away the aphid rustler from the ranch, without apparent success. 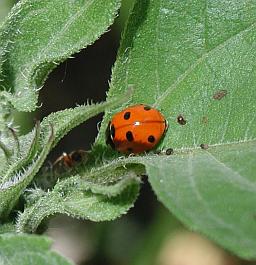 Wow! Competition for resources!
A decade ago the Dept of Agriculture introduced some special kinda ladybug to control aphids in the pecan groves down south. They looked a tad different than the ones we usually see, browner. They were an invasion, when late summer came, they swarmed on the western-facing side of our stone house, and the back of anybody who entered was covered with ‘em.
I called the Dep’t who explained don’t worry, they’re just wintering over in your house ( which was true:;there were a lot of them in the house, but they didn’t infest the kitchen.) Then in spring, when the aphids arrived, they congregated by the hundreds in the window-wells on the east-facing side of the house. Sadly many of them died there before they could get out to eat the delicious aphids.