“Build Back Better” Taxes Would Be Highest in the Developed World 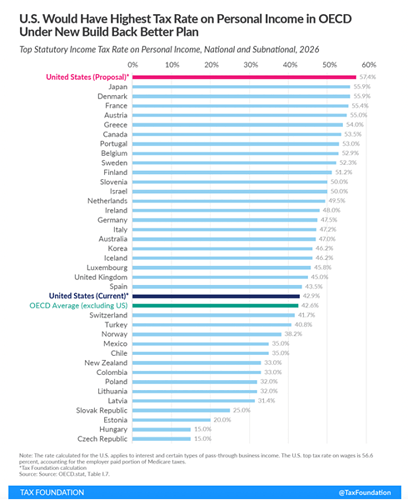 In an article at the Foundation for Economic Education Web site, “US Would Have Highest Top Income Tax Rate Among Developed Nations Under Biden Plan, New Analysis Warns”, Brad Polumbo writes that the Tax Foundation has calculated that if all of the proposed tax hikes in Biden’s “Build Back Better” scheme are enacted, and accounting for federal, state, and local taxes, the average top marginal tax rate in the U.S. would jump from 42.9%, just above the OECD average of 42.6% and comparable to Switzerland (41.7%), Spain (43.5%), and the U.K. (45.0%), to 57.4%, which would be the highest in the 38-country OECD, topping current #1 Japan at 55.9%. This does not include sales, property, and other taxes which also vary widely among jurisdictions and raise the tax man’s take of earnings further. Bear in mind the observation of L. Neil Smith in Lever Action:

The fact is, each of us pays half his income to one government or another, cutting his real wealth in half. Those we purchase goods and services from also pay half to government, except that they don’t really pay—we do, through prices twice as high as they should be. Which cuts real wealth in half again, to a quarter of what it would be if everyone kept what they earn. It also costs to comply with idiot regulations. Dixy Lee Ray, in Environmental Overkill, estimated that it amounts of another halving, meaning that the government sucks off seven-eighths; we’re left to survive on one eighth of our productive capacity.

Let me say that again, so there’ll be no mistaking it; Government consumes seven-eighths of everything we make or do; we’re left to survive on one-eighth of our productive capacity.

Trick headline. With those taxes, we’d no longer be in the developed world.

There was a recent snippet in the news noting a warning from a Chinese bureaucrat that China’s economy is slowing. Consequently, the Chinese Communist Party government is looking into actions which might help offset this slowing growth – things like streamlining regulations, reducing taxes, facilitating new business start-ups.

It is a strange world where the Communists seem to have a better understanding of how an economy works than the nominal “Capitalists”.

No one should be surprised. We already collect more tax income than any country in history - and still run a deficeit budget (if such a term can be applied to the monstrosity the legislature Dems are trying to push through.

As if to drive another spike (nails are too small to drive home the meaning) into the coffin of the former united (sic) states, multiple headlines tell how illegal aliens will be receiving more than $10 billion legal dollars under the Bitten better scheme. The bill specifically removes the requirement for a SS# to get the $$. This occurs in a context where the parents of the ‘child’ (photos of such ‘children’, BTW, often look suspiciously like young men of military age) receiving the money are working ‘off the books’, hence paying no taxes. If they do work ‘on the books’, they must create a fake SS#. God only knows what becomes of such money if it is remitted to the gubmint. I haven’t yet read VDH’s latest book, but this travesty reveals the actual value of citizenship: obey the suffocating Liliputian laws & rules, pay for whatever we say, shut up and like it.

It is well past time to fight. It’s only that those of us who are willing to fight are too old to fight. War is a young man’s game. So is revolution.