Mentour is good on a lot of topics – but this one is not really convincing.

For a start, sanctions go both ways. Russia will indeed have problems being denied certain Western parts. Just as the West will have problems being denied Russian materials critical for aircraft, such as magnesium and titanium. But human beings are creative, in business as in other areas. Those problems will sound like a giant opportunity to shady traders in places like Dubai and Singapore – people who make a living buying & selling quite promiscuously. Then there are apparently parts that Airbus buys from Russian manufacturers. Even more opportunities for those shadowy traders.

Another challenge facing Airbus & Boeing is that they are heavily dependent on Asian markets. They will have to tiptoe very carefully to avoid losing business in that part of the world because of their sanctions regime. Embraer may be able to turn the West’s sanctions to their great advantage.

Interesting that he completely ignored the most obvious source of sanction-free new aircraft for Russia, which is the Chinese C-919. Now, maybe the import-dependent Western Political Class would be dumb enough to sanction China for selling planes to Russia, but that has been compared to a drug-addicted junkie shooting her drug dealer.

The longer term ramifications are hard to assess. It is not polite to point this out in mixed company, but the majority of the world’s countries are ignoring the West’s sanctions on Russia. Perhaps we will end up with a bifurcated world, where aviation policies & standards are different in North America & Europe from the rest of the world? Equally, Western sanctions will effectively promote the development of competitors to Western products. Given increasing energy costs in the West (in part driven by their own sanctions) and decreasing manufacturing capabilities, the West may find its remaining products out-competed in years to come by Russian & Asian companies offering innovative products delivering higher quality at lower price.

This is all hoping that Western stupidity does not expand the conflict in the Ukraine to a global nuclear war. In which case, no-one is going to worry about keeping commercial airlines flying.

the most obvious source of sanction-free new aircraft for Russia, which is the Chinese C-919

At the moment, the only engine available for the Comac C919 is the CFM International LEAP, which is a French/U.S. product which would be subject to sanctions. Even if China were able to buy the engines and tranship them Russia without sanctions, Russian airlines would be unable to obtain spare parts to maintain them. The C919 is supposed to offer the domestic Chinese ACAE CJ-1000A engine as an alternative, but this engine remains in development and has encountered long delays, and is not expected to be certified until 2027 and delivered before 2030.

"Russian airlines would be unable to obtain spare parts through official channels to maintain them ". Fixed it for you.

Human beings are astonishingly adept at working around problems. E.g. one of the 17 or so Chinese airlines takes some of its Airbuses built in China and uses them to offer internal service within Russia. When the plane needs servicing, they fly it back to China and Airbus looks the other way while maintaining it. (“I’m shocked, shocked to find that gambling – I mean aircraft maintenance on planes used in Russia – is going on here.”) Because Airbus cannot afford to lose access to the Chinese market, which they see as a major part of future growth – that is why Airbus has begun to build planes there.

But that is only one of many possible work-arounds. Mentour was thinking too much “inside the box”.

The C919 is supposed to offer the domestic Chinese ACAE CJ-1000A engine as an alternative, but this engine remains in development and has encountered long delays, and is not expected to be certified until 2027 and delivered before 2030.

Certification is probably not needed for internal Russian flights 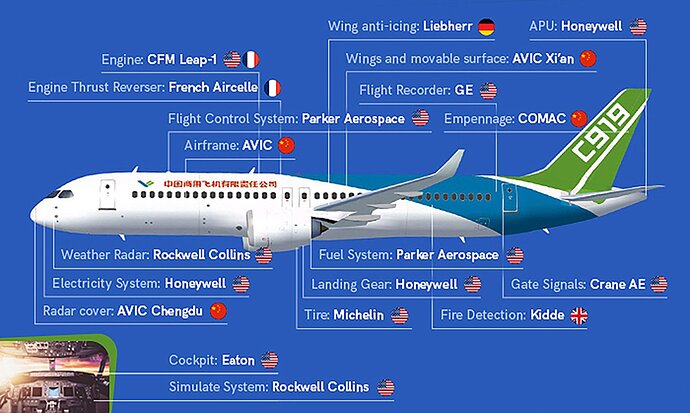 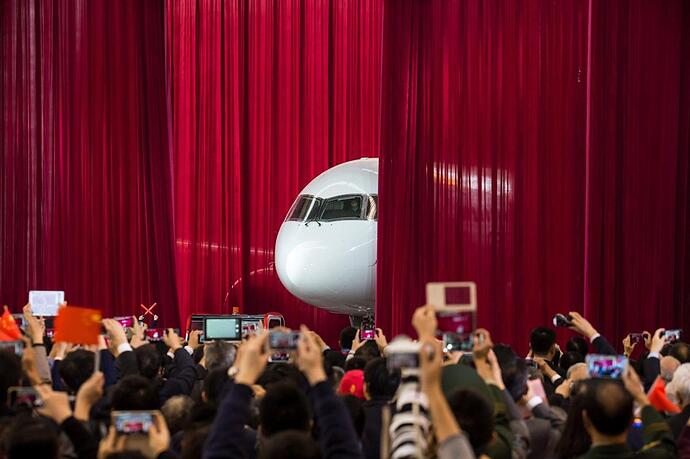 China's rival to Boeing 737 and Airbus A320 completes its first pre-delivery...

China's C919 aircraft completed its first pre-delivery test flight in Shanghai, taking its maker a step closer towards offering a substitute to Boeing's 737 and Airbus' A320 single-aisle commercial aircraft in the global aviation market. The...

An interesting question is – Which of those aircraft systems that are labelled American, British, French are made by those companies in China? For example, the landing gear is labelled as Honeywell (US). Is that made in the US by Honeywell (using Russian titanium – Oops!) or is it made by Honeywell in their Chinese factory?

Remember that Volkswagen builds more Volkswagens in China than in Germany. Things may not be what they appear.

When it comes to jet engines, the Russians can hardly be short of expertise and manufacturing skills. They have been producing wholly domestic military aircraft of various types and sizes since then end of WWII. Why could they not down rate more powerful military engines for use in commercial aircraft? Surely, military engines must meet equally high reliability standards. No?

I don’t know about Russian military jet engines, but U.S. military engines typically require a lot more maintenance per flight hour than civilian engines, which have been heavily optimised for time on wing between overhauls to reduce operating cost. Also, the latest generation of civilian engines have been heavily tweaked to improve fuel economy, so switching to a military engine would increase cost per passenger-kilometre and reduce the range of the airliner due to a more thirsty engine.

Still, if the option is no engine at all, it might make sense.

Which of those aircraft systems that are labelled American, British, French are made by those companies in China?

If the issue is evading sanctions on Russia, it probably doesn’t matter where the western-sourced components are made. The U.S. parent company is still bound to comply with sanctions based upon the ultimate destination of the material. (Back in the 1970s, when I ran a computer hardware company subject to export controls on the Warsaw Pact, I had to fill out an “ultimate destination certificate” for anything shipped outside the U.S., even to a NATO country.)

In particular, the sanctions would cut off the supply of spare parts, which are typically ordered by the operator directly from the component vendor. That said, any sanction regime is leaky. Strict sanctions were imposed on Iran after the 1979 revolution and hostage crisis, and yet when I visited there in 1999, I saw some of their F-14s, originally bought by the Shah, still flying.

Culturally, the Russians are used to making do. See, e.g. Dmitry Orlov’s books on “Collapse - Best Practices”. Pre- glass cockpit, stuffed-with-gee whiz!-electronics aircraft were quite airworthy. In fact, an argument could be made that we have passed the point of increasing airworthiness by virtue of flight automation.

I am suggesting that whatever remains of fleets of prior generation domestic (erstwhile Soviet) aircraft, plus some domestic-made parts for new Russian medium haul aircraft (Irkut MC-21) supplemented by renewed dedication to homegrown superior flight training, just could allow them to squeak by. As to parts, additive manufacturing just might lead to, “If you print it, they will hum.”

The U.S. parent company is still bound to comply with sanctions based upon the ultimate destination of the material.

This is what is so interesting about China’s mercantilist approach to business. There is a very strong “Build It In China” bias. Western companies who are competing to grab a piece of that expanding Chinese business improve their chances of winning the contract by building a plant in China. And then, often enough, start to supply their Western business from their more modern, more efficient, cheaper plant in China.

So it is very easy to see what will happen when Biden stamps his foot and orders US companies to comply with sanctions. The parts are being made in China by Chinese workers anyway!

Reportedly when McDonalds walked away from Russia, it took only a few weeks for the stores to reopen under a new name selling the same fast food made by the same Russian workers. Sanctions work only when the country imposing the sanctions has an enforceable monopoly on the supply. And that does not account for the legions of willing traders in unsanctioned places like Dubai & Singapore.