Just as “transitory” inflation kicked in in mid-2021: 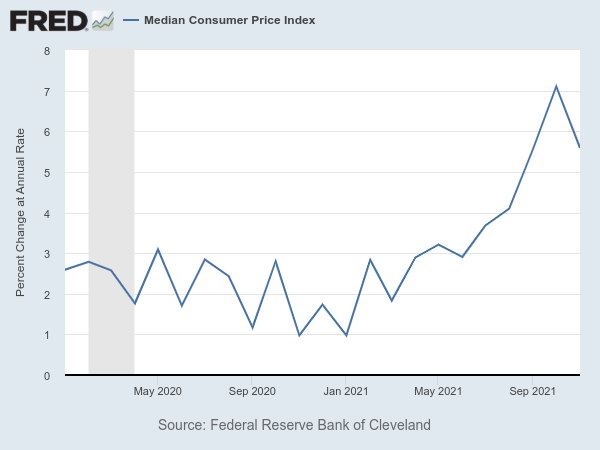 China, whose gold reserves had been relatively constant over recent months, began substantial net purchases, as reflected in imports: 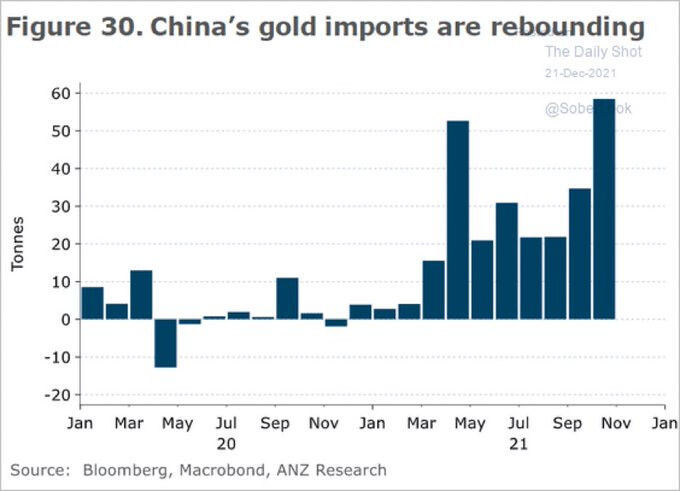 To express this in funny money, at the present gold price, a tonne (1000 kilograms) is worth around US$ 57.5 million (or around a thousand Bitcoin), so the 60 tonnes imported in November 2021 represents US$ 3.45 billion.

At the other end of the gold market, large Swiss bank UBS has announced retail gold trading via their mobile banking platform.

Here is the questions and answers sheet. Customers can buy and sell gold in quantities ranging from 0.1 gram to 2 kilograms per transaction. The gold is held in physical form in UBS vaults with collective (non-segregated) custody. Unlike a gold ETF, all customer gold is backed (UBS says) by unhypothecated physical gold 0.995 fine from an LBMA-certified foundry. Individual customers may hold up to 100 kg in their accounts (this is equal to the central bank gold reserves of Uruguay). Customers may withdraw physical gold in units of available bullion bars (1 gram to 1 kilogram), but at present may have to pick up the gold in person at a UBS branch in Switzerland.

I have written several Gnome-o-grams about gold.

People can discuss the case for gold (versus any other physical item) endlessly. The one thing that seems clear is that it is important to have possession of the item itself, not a piece of paper (or its electronic equivalent) promising that the item is in safe storage in a foreign country. Trust us!

Virtually all our family savings have been “invested” in a small private equity group called “Edelweiss Holdings Plc.”, organized in the Channel Islands but managed from Zurich by a tiny staff. We got in just after its inception in 2001. If you search it , it is NOT the one by that name in India. The Edelweiss Journal is an irregularly published journal which describes various aspects of Edelweiss’ philosophy.

We are pleased to mostly not show up on radar screens; we never advertise or solicit to sell shares. Due to FATCA, we are no longer open to US persons. I put the word “invested” in quotes, because I have learned to think of myself - from the founder of Edelweiss - as an “owner” rather than as an “investor”. Most investing nowadays more resembles renting than owning. We do not deploy our capital very often. We try to share ownership with entrepreneurs and own mostly family businesses which have been run by the same family for generations. They are hard to find.

Which brings me to gold, ownership of which has allowed me to sleep better at night over the past 20 years. To Edelweiss, gold is a superior store of value and we have kept a good bit of the metal in the vault of our bank in Switzerland (not UBS), currently around 35% of our reserves; this has been as high as 50%. One of the things we avoid this way is counter-party risk.

Myself, I understand the LBMA “gold price” to be fixed by an intentionally-arcane process whereby a massive fraud is continually perpetrated with central bank approval (if not outright central bank conspiracy amongst themselves). Via this scheme, what would be blatant fraud in almost any other setting, those without actual gold ownership or possession (aka real skin in the game) may pretend - to the tune of scores of billions of dollars worth a day - that they can deliver that unallocated gold with certainty when a contract expires. This fraud has worked for quite some time to hold down the “price” of gold, a tiny fraction of which is actually delivered when contracts expire. It works - for now - and when it doesn’t and maybe 2% of those with contracts decide to demand delivery, watch out.

Sorry to rant. This is such a blatant con game, the fact it can still go on is outrageous. Keep a close watch on the true meaning the parenthetical phrase in the OP - “(UBS says)”. (Parenthetically, supposedly unhypothecated).

To Edelweiss, gold is a superior store of value

Definitely superior to fiat currencies — over a long enough time frame. The downside compared to Real Assets is that gold generates no income, and in fact carries holding costs which can become quite significant over time. Entropy gets us all, one way or another!

Fundamentally, any form of deferred consumption (fiat, gold, mines, factories) is worth exactly what real property someone else is prepared to exchange for it at whatever point in the future the seller chooses to sell. I guess we are all playing the futures market, one way or another.

Virtually all our family savings have been “invested” in a small private equity group called “The Edelweiss Fund Plc.”

I envy you. I watched an excellent interview of Anthony a year or two ago. Wisdom and character. He keeps a low profile. I binge read the articles on the website. I was disappointed to find I could not have them manage my life savings.

I was very fortunate. I met Tony when I sat next to him on a flight to Zurich in 2000. We became friends and I understood his philosophy & signed on. I count myself lucky. I am pleasantly surprised you know of him!