On 2022-10-09, NASA’s Swift Observatory and Fermi Gamma-ray Space Telescope detected a gamma ray burst event, given the catalogue number GRB 221009A. It was immediately obvious this was an exceptional event. The X-ray signal was stronger than from any previously detected burst, and the length of the event was very long. A wide variety of telescopes and detectors on the Earth and in space were turned to observe the location of the burst and identified it as coming from a galaxy in the constellation of Sagitta at a distance of around 1.9 billion light-years, making this one of the closest gamma ray bursts ever seen. An observatory in China detected photons from the burst with an energy of 18 TeV, the first to be detected above 10 TeV (bursts with any photons above 1 TeV are rare).

Most stunning is that stations around the globe that monitor radio propagation saw a sudden change in signals from distant stations bounced off the ionosphere. 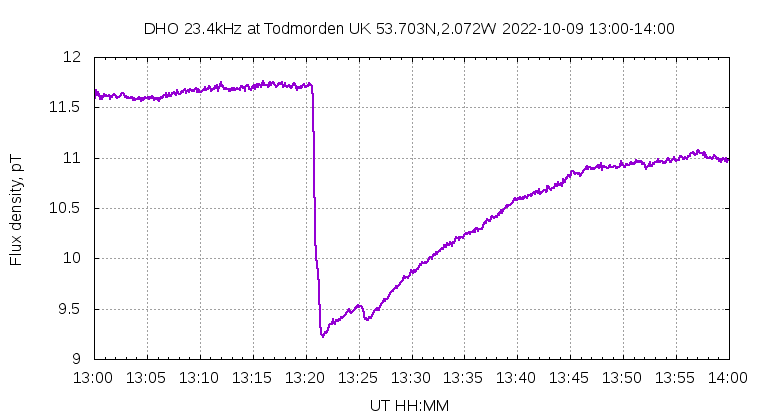 This is the kind of disturbance usually seen due to solar flares or other events on the Sun. But this one was caused by an explosion in a galaxy almost two billion light years from Earth. Now that’s a remarkable kaboom!

Imagine if such an event happened in our own galaxy.

Imagine if such an event happened in our own galaxy.

Must this possibility, then, go on my list of things to worry about which can extinguish intelligent life on Earth? And Mars?

Must this possibility, then, go on my list of things to worry about

Not so much. As the video explains, the Earth’s atmosphere shields the surface from most of the direct effects of a gamma ray burst. There may be secondary effects, potentially serious, such as depletion of the ozone layer which causes a die-off of vegetation and marine oxygen-producing organisms, but these are long term effects which an intelligent civilisation may be able to cope with.

Of all the mass extinctions in the fossil record, there is only one which is considered a candidate for having been caused by a nearby gamma ray burst, and this hypothesis is a minority opinion.