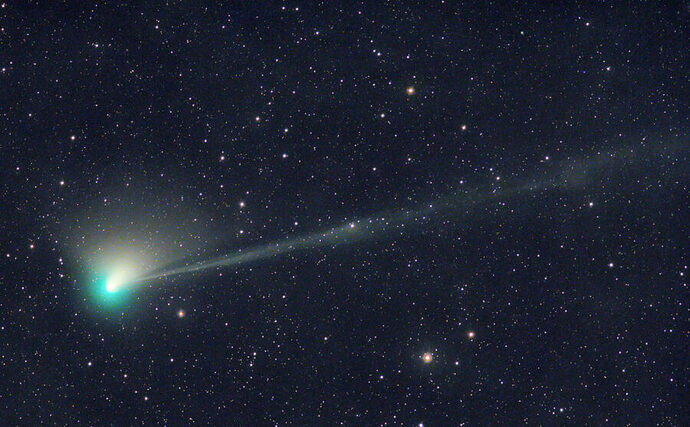 900×557 121 KB
Comet C/2022 E3 (ZTF) was discovered by the Zwicky Transient Facility on 2022-03-02, inbound from the Oort cloud to the inner solar system. It rounded the Sun on 2023-01-12, reaching perihelion at a distance of 1.11 astronomical units (AU—the mean distance of the Earth from the Sun) and is now outbound to whence it came on a near-parabolic trajectory. Although the comet will dim as it recedes from the Sun, its distance from Earth continues to decrease until its closest approach on 2023-02-01 at a distance of 0.28 AU, so it is expected to become brighter as seen from Earth until that date.

The comet has now crossed the threshold of naked eye visibility, approaching magnitude 6, and possibly brightening to magnitude 5.5 at peak. Now, when I say “naked eye visibility”, that’s for an observer with perfect eyesight, in a totally clear sky, with no light pollution or interference from the Moon. An object of this brightness is, however, easily spotted with binoculars and with a modest telescope you may be able to pick up the green tint of the coma surrounding the comet’s head, as organic molecules emitted by the nucleus break down into simpler compounds due to ultraviolet radiation from the Sun.

If you have binoculars and a clear sky, this comet is very easy to find. It is currently circumpolar, and for observers in the northern hemisphere does not set, so it’s in the sky at all times and visible whenever it’s dark (unless your northern horizon is obscured by terrain or obstacles). It is currently passing between Ursa Major (the Big Dipper) and Ursa Minor (the Little Dipper), two of the easiest-to-spot constellations in the sky. 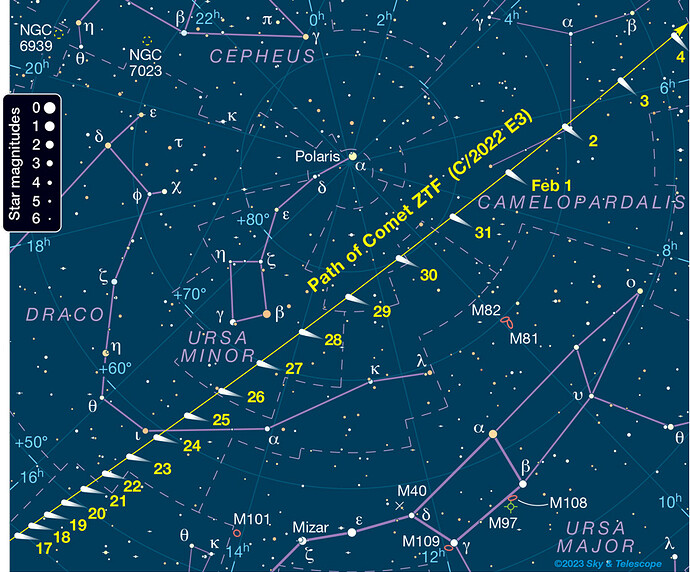 900×747 272 KB
Here is an [observing guide from Sky & Telescope]
(https://skyandtelescope.org/astronomy-news/spot-circumpolar-comet-ztf-c-2022-e3-in-binoculars/) with additional details.

You can photograph the comet with a camera aimed toward it using a lens from normal to moderate telephoto, setting the ISO sensitivity as high as your camera permits without introducing unacceptable noise (ISO 1600–3200 on present-day DSLRs and mirrorless cameras) and a shutter speed of one to four seconds. The more you zoom in on the comet, the shorter a shutter speed you’ll need to avoid star trails due to the Earth’s rotation. You won’t be able to see the comet in the camera’s viewfinder, so unless your camera has a “live view” feature, aiming will be a matter of “by guess and by gosh”. If you have a zoom lens, start zoomed out and then incrementally adjust the camera position to centre the comet before trying zoomed in shots. Because the camera can integrate light over a long exposure, dim, extended objects like comets are usually far more impressive in photographs than observations with the Mark I Eyeball. If you get any comet shots, please post them here.

Here is a video guide to finding the comet over the next week or so.