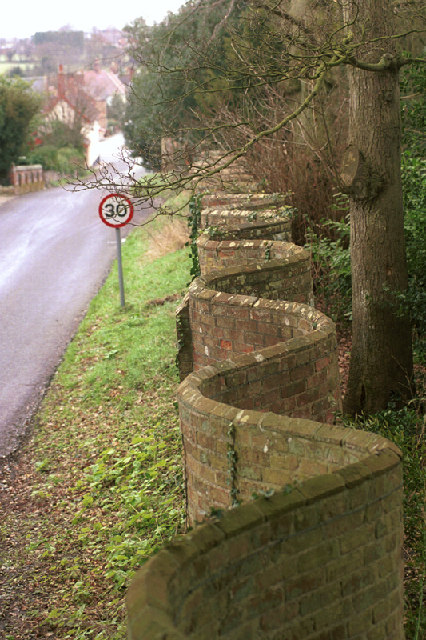 Crinkle Crankle walls are associated with Great Britain, in particular Suffolk county, which has more than fifty exemplars, twice as many as in the rest of the UK. The serpentine design dates to ancient Egypt, where many have been found in the city of Aten, founded in the period of Amenhotep III (c. 1391–1353 B.C.).

The design may have originally been motivated for use in fortifications, as it would break up closed ranks assaulting the wall and expose the attackers to defenders on the other side. In modern construction, in addition to style, serpentine construction economises on bricks required to build the wall. This may seem an odd claim, since a wavy wall is obviously longer than a straight one, but the crinkle crankle wall can be built from a single rank of bricks, while a straight wall only one brick thick and without buttresses would easily fall over.

The St. Louis Zoo has a wall like this on one side . I always thought it was cool as a kid. Also, this wall will probably outlive me , for arches are strong as all get out.