On November 24, 1971, a man identified only as “Dan Cooper” hijacked a Northwest Airlines flight from Portland, Oregon to Seattle, Washington, claiming he had a bomb and demanding US$ 200,000 in cash and four parachutes. After landing in Seattle, allowing the passengers to leave the plane, and refuelling, he directed the crew to fly southward toward Portland at low altitude and airspeed and, somewhere en route opened the rear “air stairs” of the Boeing 727 and jumped from the plane with the money. Despite a massive search of the area and an FBI investigation which was open over a period of 45 years, neither the hijacker, any evidence of his body, or the parachute was ever found. In February, 1980, three packets of what was identified as US$ 5880 of the ransom money were found washed up on the shore of the Columbia River near Vancouver, Washington. None of the rest of the money has ever been found, nor is there evidence any of the recorded serial numbers of the cash having been spent.

This is one of the greatest unsolved mysteries of aviation, spawning dozens of books, movies and documentaries, hundreds of theories, and even an annual conference of investigators and fans. “D. B. Cooper” (a name the hijacker never used, which resulted from confusion by local law enforcement and news media) has become a fixture of popular culture and a folk hero for some who see him as having “beat the system”.

Now, Dan Gryder, veteran pilot, skydiver, DC-3 operator, and creator of the “Probable Cause” YouTube aviation channel, believes he has gotten to the bottom of the mystery and presents the results of his multi-decade investigation in a video that runs for two hours and forty-eight minutes. This video is tedious, repetitive, self-indulgent, poorly-edited, and difficult to make it through. It could have been edited down to around an hour without losing anything and being more comprehensible and convincing in its argument. But darned if Gryder’s theory and the evidence he presents in support of it (even personally reproducing the “Cooper” parachute jump with a simulated money bag) isn’t persuasive. The narrative hangs together; the motivations make sense, and the recollection of family members are consistent.

At this remove, with the eternally bungling FBI having lost almost all of the physical evidence, we will probably never know what really happened, but this is a story that makes sense and doesn’t require any “then a miracle happens” leaps to explain the events.

… a video that runs for two hours and forty-eight minutes. This video is tedious, repetitive, self-indulgent, poorly-edited, and difficult to make it through.

Is there a Cliff Notes version anywhere? Gryder’s thesis sounds interesting – but not nearly 3 hours interesting!

In his nearly three-hour video documentary “D.B. Cooper: Deep Family Secrets,” Gryder claims the hijacker was actually Richard Floyd McCoy, Jr., who was arrested six months after the DB Cooper hijacking for a very similar yet botched attempt in Utah. 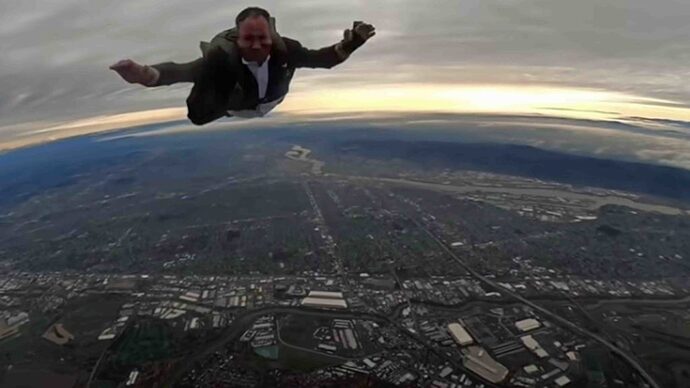 The pilot told Cowboy State Daily that his re-enactment of D.B. Cooper's jump was key to solving the mystery.

Thanks for the link, CT. The idea that the FBI identified the perpetrator but screwed up and then covered up seems … all too believable of the FBI. And that was half a century ago!

One loose end in the short version:
"A key for his conclusions, he [Gryder] said, was reenacting the jump this year holding the bag of money.

The bag filled with cardboard boxes full of sand in the weight of the original ransom, was impossible to hold on to, Gryder said."

That would imply Cooper would have had to let go of the bag with the money, which would then have been splatted over the countryside. So why was that cash not found? Or was it found by the FBI and became 100% for the Big Guy?

Not having watched the video, the question is begged of how McCoy got it to work the second time.

So why was that cash not found?

US$ 5800 of the cash was found (and identified by the marked serial numbers) on a bank of the Columbia in 1980, deteriorated as if it had been in water or mud for nine years. This is consistent with the hijacker having jumped near Portland, lost hold of the money, and having it go into the river. It was found not far downstream of the jump point Gryder estimates as most likely. The rest appears to have been lost, as none of the marked cash has ever turned up in surveillance afterward.

Not having watched the video, the question is begged of how McCoy got it to work the second time.

Practice makes perfect! In particular, the second hijacker demanded the ransom in a backpack with D-rings which could be attached to a parachute harness.

This is consistent with the hijacker having jumped near Portland, lost hold of the money, and having it go into the river.

Indeed! But is it not strange how often the improbable happens? What is the likelihood of an object dropped essentially at random over the Western US ending up in a river? Just based on area, I would guess the likelihood is low.