Dark matter (or, more accurately, transparent matter, which does not interact with the electromagnetic force) has been proposed to explain anomalies in the rotation curves of galaxies, the velocities of galaxies within galactic clusters, and the structure of the cosmic background radiation. Without dark matter (taking account only visible stars, gas, and dust) Newtonian gravitation produces incorrect predictions for these observations. (At these scales, the corrections of Einstein’s general relativity are insignificant.) But the gravitational accelerations at these scales are far below those which can be tested in the laboratory or measured in the solar system.

In 1983, Israeli physicist Mordehai Milgrom proposed a theory, Modified Newtonian Dynamics (MOND), in which at low accelerations the force of gravity departs from the inverse square law of Newton and approaches a linear relationship. This theory makes correct predictions of a variety of observations without invoking dark matter, and while it does not explain some other observations, MOND advocates argue that dark matter has difficulty with them as well.

In this interview astronomer Stacy McGaugh describes how his work with low surface brightness galaxies led him to doubt the plausibility of dark matter as an explanation for their rotation curves and, combined with experiments having ruled out a large number of candidates proposed for dark matter, investigate MOND as an alternative explanation for observations.

There’s also a claim out there that the main reason for thinking there’s dark matter (the “anomalies in the rotation curves of galaxies”) is just a mistake: that if you use it right, general relativity predicts those “anomalies” and thus they aren’t really anomalies: 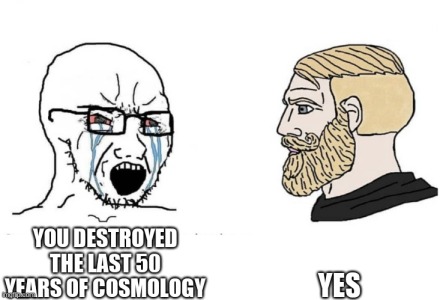 It’s not often I get excited about papers from the physics community. The field I used to love has turned into a dreary ghetto of noodle-theory wankers, experimental particle physics bureaucr…

I’m not aware of any such claim

Actually, when dark matter was first proposed in 1933 by Swiss astrophysicist Fritz Zwicky, it was to resolve an entirely different conflict between theory and observation: the velocities of galaxies within galaxy clusters. When Zwicky measured the velocities of galaxies within the Coma cluster, he found that they were moving far too fast to be bound to the cluster based upon the mass he calculated from the luminous matter in its galaxies. This is pure Newtonian gravity: general relativity effects are utterly negligible at these scales. Since then, this has been found to be the case for many other clusters of galaxies.

The same applies to the orbits of stars within elliptical galaxies: to be gravitationally bound, their velocity dispersion must obey the virial theorem (again, pure Newtonian gravity and mechanics). But it doesn’t, and hence if they are to be gravitationally bound (and if they weren’t, the galaxy would have long ago evaporated into surrounding space), there must be more mass than is accounted for by visible stars.

Gravitational lensing, a phenomenon of general relativity, provides a direct measure of the mass between the object being lensed and the observer, and measurement of existing lenses shows the lensing mass must be much greater than accounted for by visible stars in the galaxies and clusters causing the lensing.

Precision measurements of the anisotropies in the cosmic microwave background radiation allow calculation of the mass of the early universe at the time it formed, around 370,000 years after the big bang. These measurements show there was far more mass in the universe at that time than can be accounted for by all baryonic (ordinary) matter like stars, planets, dust, and interstellar and intergalactic gas today. The amount of dark matter required to fit the observations is consistent with that implied by the other phenomena suggesting its existence.

Models of the formation of structure (condensation of diffuse matter into stars, galaxies, and galaxy clusters) in the early universe do not yield results consistent with what we observe today if only ordinary matter is included. The high radiation (light) content of the early universe disperses concentrations of matter before gravity causes them to condense into structure. Dark matter which is not affected by this radiation is required to create the cores around which structure forms. When dark matter is added, simulations produce results that closely resemble the universe observed today.

Galaxy rotation curves are another observation which suggests the presence of dark matter, but far from the only one. An alternative to dark matter that only claims to resolve that discrepancy but doesn’t deal with the others is not a plausible solution.

There’s “dark matter” as in things we can’t see through our telescopes, and there’s “dark matter” as some new sort of particle distinct from normal matter. A central black hole can explain why a galaxy doesn’t fly apart, and a central black hole in each galaxy can explain why clusters of them don’t fly apart, but explaining galaxy rotation curves may require dark matter to be widely distributed in the galaxy (and thus perhaps some sort of new particle reminiscent of the riddle “It cannot be seen, cannot be felt, cannot be heard, cannot be smelt. It lies behind stars and under hills, and empty holes it fills”).

As for models of the early universe, there must be many uncertain assumptions in those.

While the central black holes in galaxies are impressive in mass compared to individual stars, they are negligible compared to the mass of the stars in the galaxy and completely insufficient to affect whether stars are bound to the galaxy of the dynamics of galaxies’ motion within clusters of galaxies.

The mass of the central black holes, both for typical and supergiant galaxies with supermassive black holes, has a negligible effect on galaxies’ ability to bind their stars into orbits and the dynamics of their motion within galactic clusters. To explain these observations, galaxies must have invisible mass on the order of ten times that of the visible stars, while the central black holes contribute only a tiny fraction of one percent of the stellar mass.

Okay, I had a good look at the paper, and found it very well written: about as simple as one can get for such formidable subject matter. 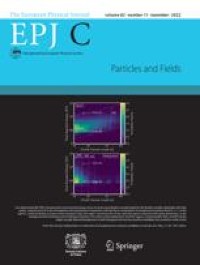 Galactic rotation curve and dark matter according to gravitomagnetism - The...

Historically, the existence of dark matter has been postulated to resolve discrepancies between astrophysical observations and accepted theories of gravity. In particular, the measured rotation curve of galaxies provided much experimental support to...

It is totally agnostic as regards dark matter in general: it examines three different galaxies as examples, and assigns them mass-to-light ratios of 150, 6.50, and 1.58. (Those numbers are relative to the mass-to-light ratio of the Sun, if I’m reading the notation correctly.) So even according to it, there can be two orders of magnitude difference in the amount of dark matter. What the paper seeks to explain are rotation curves, those being the curves of rotation velocity versus distance from the center of the galaxy. The main problem with those curves has been that for stars outside the bulk of the galaxy they doesn’t decay fast enough (or even at all): per Newtonian dynamics, more distant orbits are slower (with for example low earth orbit being about 8 km/s versus geosynchronous orbit being about 3 km/s), yet for galaxies instead of decaying the curve is nearly flat. A nearly-flat curve (after an initial rise from zero) is okay inside the galaxy, where as you go farther out there’s more mass pulling you inwards, but once the mass thins out, the curve should start decaying.

The dark matter explanation involves a “halo” of dark matter that is outside the bulk of the galaxy and adds to the gravitational force on those outlying stars, requiring their orbits to be faster. And producing such a weird halo is why people have dreamed up new classes of particles: it’s hard to imagine how ordinary matter could be present in such huge quantities outside the bulk of the galaxy without emitting light. Indeed, getting the dynamics of that “halo” to work can’t be easy even for people who do feel fully free to invent new classes of particles.

The paper’s explanation actually requires more dark matter in general: the effect it adds in to the equation (“gravitomagnetism”) is a repulsive force that somewhat counterbalances the force of gravity… but decays faster with distance. So it modifies the curve mostly by decreasing it in the regions closer to the center: it’s saying not that there’s an additional attractive force on outlying stars forcing their orbits to be faster (as there is in MOND), but that there’s an additional repulsive force on closer stars allowing their orbits to be slower. The paper is not even above adding carefully selected bits of dark matter to make the curves fit observations: it does so for two of the example galaxies – but it adds it in relatively modest quantities and in places where there is plenty of normal matter: in one case the extra mass is added to the spiral arms of the galaxy and in another as a “ring” at the point where the central “bump” of the galaxy transitions to the outer “disc”. So this is the ordinary, mundane “well, I guess from millions of light years away we can’t see everything perfectly” sort of dark matter, not the “reinvent the laws of physics” sort.

Though this was the first I’d heard of it, gravitoelectromagnetism is not a new invention of his; it’s an established approximation to the laws of general relativity, suitable for situations like this where velocities are relatively small (in this case “a beta ratio on the order of 1/2000”) and thus a first-order approximation is adequate. It’s surprising that it would have effects this large, but that’s the claim (backed up by a lot of heavy-duty math).