@ToughSf
99% of the energy of a Type II supernova escapes the collapsing core in the form of neutrinos. And they are lethal from a distance of 16 AU, delivering a 4 Sv whole-body-dose. Based on estimates from Kamiokande neutrino detector fluxes: https://t.co/HnhVaRMFfD 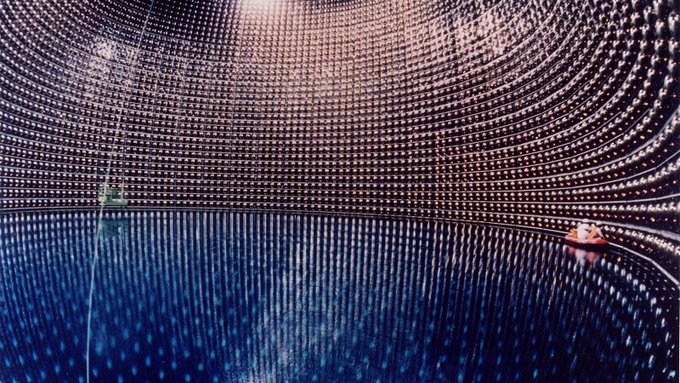 The neutrino emission from a Type II supernova is so intense that although neutrinos barely interact with matter at all, they would deliver a lethal dose of radiation to a human at a distance of 16 astronomical units, about the distance of Uranus from the Sun. But, as the paper, “Neutrino Emission From Supernovae” [PDF], notes:

If, however, by some very unhappy circumstance you were to find yourself only 16 AU from a supernova, neutrino radiation would be a big problem, but definitely not the biggest. … [I]onizing radiation caused by supernova neutrinos is insignificant compared to the gamma radiation caused by the same supernova. If you were 16 AU from a supernova, you would probably live some time after the neutrino emission passed, but when the gamma rays hit you, it’s game over.

The last time I ran into this calculation the author said the neutrino flux was lethal out to some tens of light-years to an unshielded human. That caught my attention since thousands of miles of a planet would provide no shielding. No pointer, sorry. I don’t plan on observing a supernova up close.

No pointer, sorry. I don’t plan on observing a supernova up close.

Well, me neither, but since I have a direct personal interest in such issues due to my hideously dangerous totally innocuous experiments with the Large Neutrino Collider in the Fourmilab sub-basement, I dug a little into this and found this NASA Technical Reports document, “Supernovæ and mass extinctions” from 1994. Here’s the abstract.

Shklovsky and others have suggested that some of the major extinctions in the geological record might have been triggered by explosions of nearby supernovae. The frequency of such extinction events will depend on the galactic supernova frequency and on the distance up to which a supernova explosion will produce lethal effects upon terrestrial life. In the present note it will be assumed that a killer supernova has to occur so close to Earth that it will be embedded in a young, active, supernova remnant. Such young remnants typically have radii approximately less than 3 pc (1 x 10(exp 19) cm). Larger (more pessimistic?) killer radii have been adopted by Ruderman, Romig, and by Ellis and Schramm. From observations of historical supernovae, van den Bergh finds that core-collapse (types Ib and II) supernovae occur within 4 kpc of the Sun at a rate of 0.2 plus or minus 0.1 per century. Adopting a layer thickness of 0.3 kpc for the galactic disk, this corresponds to a rate of approximately 1.3 x 10(exp -4) supernovae pc(exp -3) g.y.(exp -1). Including supernovae of type Ia will increase the total supernovae rate to approximately 1.5 x 10(exp -4) supernovae pc(exp -3) g.y.(exp -1). For a lethal radius of R pc the rate of killer events will therefore be 1.7 (R/3)(exp 3) x 10(exp -2) supernovae per g.y. However, a frequency of a few extinctions per g.y. is required to account for the extinctions observed during the phanerozoic. With R (extinction) approximately 3 pc, the galactic supernova frequency is therefore too low by 2 orders of magnitude to account for the major extinctions in the geological record.

This proceeds on the assumption that the lethal radius of a supernova is on the order of 3 parsecs, which is 9.8 light years. The primary mechanism is radiation from being embedded in a young supernova remnant. The neutrino radiation appears to be insignificant unless you’re so close this would be among the least of your problems. The paper notes there are great uncertainties in such calculations, but probably not enough to make many orders of magnitude difference in the lethal range.