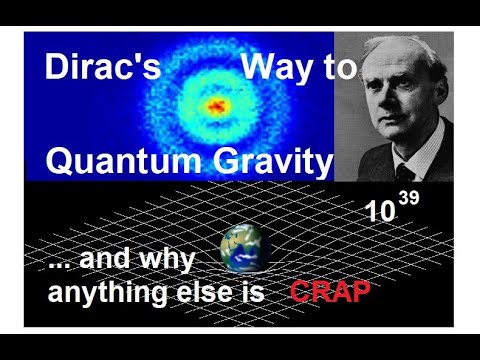 Speaking of Dirac’s “dangerous numerology” of dimensionless quantities, those of us interested in bits may want to consider this “dangerous numerology” (which I must credit to Frederick Parker-Rhodes’s Theory of Indistinguishables’ Combinatorial Hierarchy and the Bit-String Physics it spawned with which I’ve had some peripheral involvement):

Note 10^38 is in this sequence of Mersenne primes.

But now get a load of this:

Which is approximately the dimensionless electromagnetic scaling constant hc/(2 π e^2).

Well, Noyes, et all founded an organization called Alternative Natural Philosophy Association to explore these numbers and have come up with an argument for why they may be considered the other 3 coupling constants for the 4 forces of nature.

I won’t try to apologize for that thesis here… I just figured it was worth mentioning.

Of course Feynman didn’t have the number “10” afixed to his wall, as he did “137”, but Pythagoras did much more than that: Pythagorean acolytes had to go around mute for years doing little else but meditating on the number 10, which they called the “tetraktys”. Likewise we may dispense with “3” as virtually every foundational metaphysics, numerology and theology is all over that.

Here is a review paper from 2007 that describes Dirac’s large number hypothesis and the many variations on it and additional apparent “coincidences” found by others over the years, experimental evidence and arguments for and against it, and the status of investigation of changes in the gravitational constant G over cosmological time, “Large Number Hypothesis: A Review”. Full text [PDF] is available at the link.

The coincidences involving the radius and mass of the proton seem odd to consider fundamental to me since the proton is not a fundamental particle and most of its mass comes from the binding energy of the massless gluons that hold its three constituent quarks together.

Another numerological observation that’s always intrigued me is the universe’s inordinate fondness for the number three:

Wouldn’t it be neat if all of these were related somehow?

A rationale for using baryonic matter (protons and neutrons) in dimensionless number calculations relating macro to microcosmic numbers is that virtually all gravitation (spacetime curvature) may be on account of their mass. If one may attribute significance to the curvature around a proton’s surface, for example, to its contribution to cosmological phenomena like gravity, then both the mass and radius may be rationalized without too much of a stretch.

Take for example this calculation:

The 4 digit coincidence with a prediction of the pure-information derivation by the ANPA folks here is intriguing.

The small discrepancy, in the case of gravitation, between the Combinatorial Heirarchy’s dimensionless integers and its interpretation as dimensionless coupling constants of the 4 forces of nature, might reflect the remainder of gravitational mass in the universe after the proton is taken into account. So to get a handle on of what particle(s) this residual might consist, I wrangled Mathematica into solving for the mass of a hypothetical (composite) particle that exists in a ratio of 1:1 with protons. Unsurprisingly, it came up with something almost as massive as the neutron (or proton). I subtracted it from the neutron mass, leaving a final residual mass (after accounting for the neutron component of it) for this composite particle of about 6MeV/c^2.

What this seems to say is that if the CH approach is correct and if the universe had an equal number of neutrons and protons then the remaining mass of the universe that needs to be accounted for is about 6Mev/c^2 per proton, or about 10x the mass of the electron (0.5 MeV/c^2) – but is less than half of the ionization energy of hydrogen. There’s a lot of ionized hydrogen out there.

A rank ordering of particles and their use in calculating the dimensionless gravitational coupling constant, sorted by how closely they are to the combinatorial hierarchy’s 4th entry (the third entry being 137 corresponding to electromagnetic coupling aka the fine structure constant): 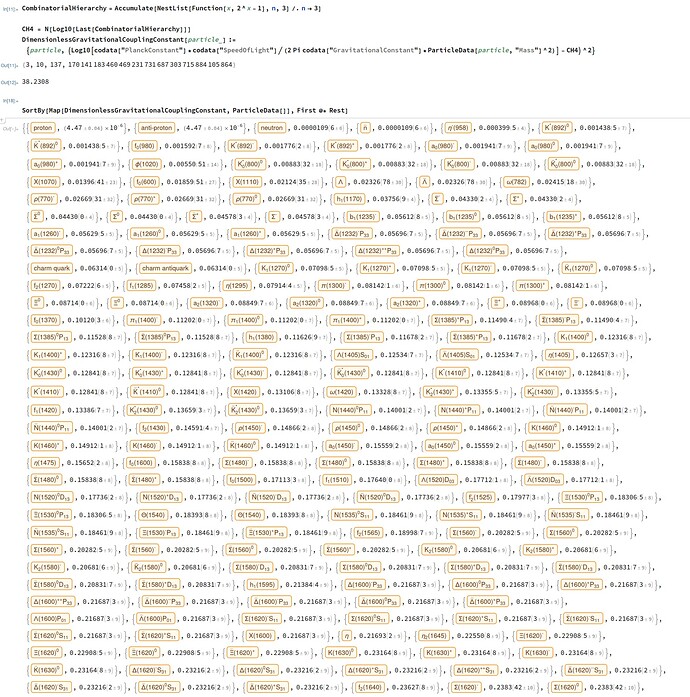