Does Developing Intelligence Doom a Species to Extinction? 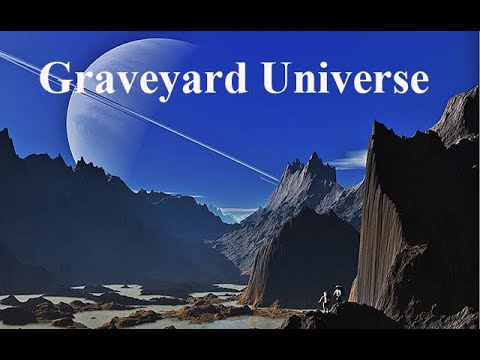 Well, maybe, but not developing intelligence certainly dooms a species to extinction when its environment becomes inhospitable or a calamity such as an asteroid or comet collision occurs. More than 99% of species that have ever lived on Earth are now extinct, and unless life migrates from the home planet to other habitats, all of the survivors will follow as the increasing luminosity of the Sun destroys the biosphere between 1 and 2.8 billion years in the future.

Fortunately, the human race does not have to worry about being doomed to extinction due to our intelligence. For that, we would first have to develop intelligence. 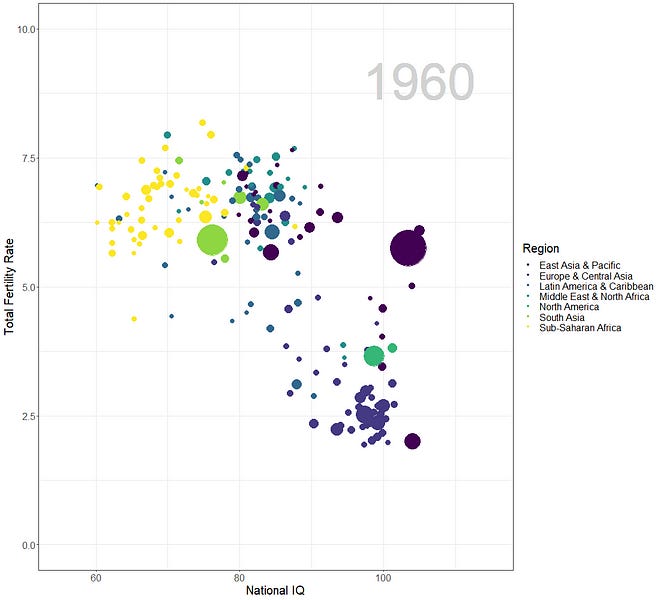 Dysgenics by the Numbers

Quantifying the Fall of Civilization

Here is my 2004 analysis of dysgenic demographics, “Global IQ: 1950–2050”. My calculations were based upon the yearly population estimates by country in the U.S. Census Bureau International Data Base 2003” and the estimated mean IQ of the population of territories in Lynn and Vanhanen’s IQ and the Wealth of Nations. Here is a summary of the results. 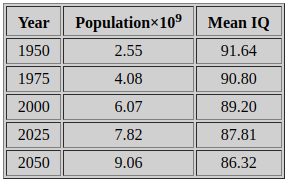 Compared to the global IQ chart in “Dysgenics by the Numbers”, I computed lower mean global IQ for the present time but a shalllower decline out to 2050, where I estimated 86.32 vs. around 81 in the George Francis article. I did not attempt to compensate for the Flynn effect for reasons I discuss in the article. In both analyses the overwhelming effect driving the decline of the mean is the increase in population in low-IQ countries, in particular in sub-Saharan Africa, compared to stable or shrinking populations in Europe, East Asia, and the Americas.

Just as a thought – Is the decline in global human IQ necessarily a Bad Thing?

Ignoring for a moment Biden*'s desired global nuclear war and green energy (when the wind happens to blow), continuing human progress will likely have multiple effects:

One of them is that increasing productivity and energy use can result in a decreased need for individuals to spend time working productively – the “Leisure Society” model that was popular in the booming 1960s. There is no need for a high IQ to slough off.

Another is the change in the nature of work as a result of increasing automation & energy use, from producing material goods to service industry type tasks – cutting hair, cutting lawns. lecturing at a university. Arguably, the average IQ required for the average worker to perform effectively is going down.

Thus, a lower average IQ population may be a Good Thing – at least from the Eloi perspective.

Evolution doesn’t care about good or bad. It’s just replicators in action. And right now, the winning replicators are as follows: 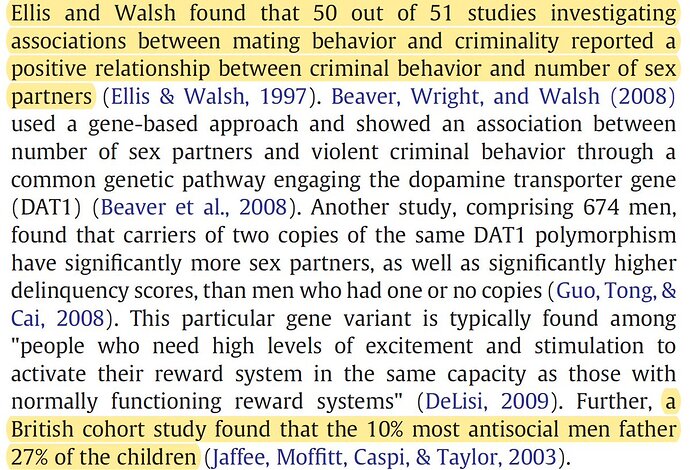 Criminal offending as part of an alternative reproductive strategy:...

Criminality is highly costly to victims and their relatives, but often also to offenders. From an evolutionary viewpoint, criminal behavior may persis… 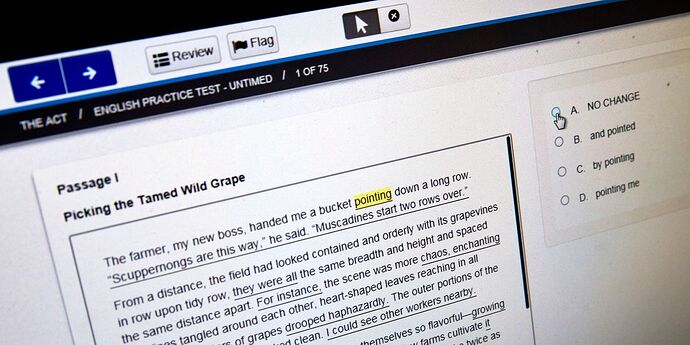 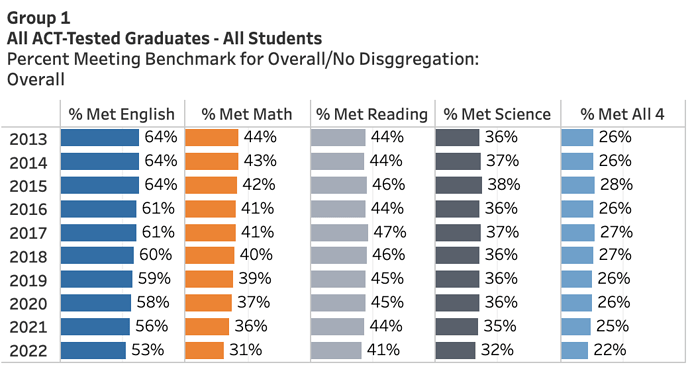 Testing organisation fails to notice that the decline across all categories has been essentially linear since 2013, with a slight acceleration in the pandemic years.

Does ontogeny recapitulate phylogeny? I have always wondered why so many child prodigies commit suicide young.
My BMD says it’s “focus”, meaning, I think, that with little brain capacity, you will be occupied with the goals of immediate survival, you’ll feel happy and satisfied if you’re warm and well fed. But, with lotsa brain power left over after that, you can’t help but see how futile and finite the entire enterprise really is .

In an environment where activists compete on outrage, there aren’t many who can lift themselves above the memewars:

Revolutionary, terrorist, and protest movements are trying to achieve
their vision of the good by creating a crisis that makes compromise
impossible, forcing enough people in power to endorse radical aims.
Their leaders all work on a similar principle.

In any given population there will be a wide distribution of opinion
about what should be done. Some care a little (5 out of 100), some
care a lot (95 out of 100). The revolutionary leaders want people to
all be at 100 out of 100. But maybe only 10% are there. Most are
somewhere between 30-70. Leaders need to make the population as a
whole become more radicalized towards their position.

Arguing does not really work. What works is manipulating events so
that things are no longer about issues, but identities. You can
compromise on an issue. You cannot compromise on an identity. That’s
the thing. If you are a revolutionary you don’t want compromise. So
what you do is you create a crisis where compromise is not possible.

In practical terms that almost always is “Now it is no longer about
what outcome you want, but who you stand with. Them or us?”

There are lots of ways you can try to make this happen. In the civil
rights movement that strategy was to provoke aggression on the part of
the police, so that blacks who were afraid of protesting or who just
disapproved of the idea, felt like “their side” was being attacked.

Thus the logic of sending children to be bit by dogs and ripped apart
by fire hoses. “Look at what THEY are doing to US! Will you just stand
by NOW?”

It doesn’t have to be non-violent. Violence can do this equally well.
Logic of civil conflict is that if it is a violent contest between 0
and 100, you pick the side closest to you because what else can you
do? Violence quickly removes grounds of neutrality.

The point of a terrorist attack in a place like France, ISIS says, is
to make it increasingly untenable for Muslims to be French. Majority
will not trust them, moderates will lose ground.

Again, the point of revolutionary activities is to delegitimize the
moderates. Extremists hate their own moderates far more than they hate
their enemies.

Not having read the thread here, I am going to just shoot from the hip. I think developing comfort leads to extinctions. Animals of all stripes are constantly looking for three irreplaceable things: water, food, propagation of the species. When those things become abundant and easy to acquire, the traits developed for acquiring those things first atrophies and then disappears all together. Intelligence is just a means of acquiring those things in an efficient manner.

A children’s movie, but still a great example of what I am talking about:

Oh yes I totes remember that movie. And given our burgeoning obesity, it was prophetic.
Yeah, look at Homo Floresiensis, an isolated group of humans which had no predators so it began miniaturizing. Great move, advantageous and efficient—until s bigger stronger predator evolves or is imported. In their case, I think it was modern-sized humans.

Population replacements in Britain’s history (with another one probably happening now).

The “Big Four” replacements ignore what was probably the two most important “replacements”.

First, the Vikings maybe around the 800s AD who came to loot and stayed to breed. They also had a huge impact on the language of the subservient Saxons, giving rise to a major part of what we call the English language.

Then who could forget 1066 and all that. The Normans (Frenchified descendants of Vikings) arrived and entirely replaced the then-Ruling Class – creating the England which was eventually able to rule much of the world (for a historically short period).

The border & population stability so dear to our current Political Class is merely one frame from a never-ending movie. If English women have no interest in being mothers, they will undoubtedly be replaced by fertile populations from India and Africa – as anyone who visits London will testify.

Great observation, which makes me think of how Israel and Ukraine are viewed by those who take an a-historic approach for near-term political purposes. Whenever different standards are applied to a geographic region whose population is conquered, replaced, physically or culturally, one can easily see the prejudices of the grandstanders. In the cited cases, Israel was the home of the Jews since biblical times; they were the only people who ever established a political entity - a monarchy - organically, before they were driven out. This was followed by many conquests as a result of geography, i.e. location at the junction of warring forces east and west. It was their religion and culture which held the Jews of Judea and Samaria together and nurtured the desire to return to their original homeland. Such hasn’t happened often. Those who despise Israel for whatever reason (who could know?) ignore these inconvenient facts or deem them irrelevant - though they are Gospel in other regions at other times for other peoples.

Ukraine shares Russian roots going back over 1000 years. The name of Ukraine’s capital, Kiev, tells the tale. Both Ukraine and Russia claim to be descendants of the common ancestor KIEVan Rus. All this history is assiduously ignored in the zealous desire to assign maximum villainy to one Vladimir Putin, motived, they say, to re-establish the USSR - which was a mere ripple in the history of Ukraine/Russia. Assiduously denied Russia is a exactly the same national security interest which led to the US threatening nuclear war over offensive missiles in Cuba. Through eight years of clear diplomacy, in the face of aggressive war by Ukraine on Lugansk and Donetsk - both with deep Russian cultural roots and sympathies - Russia (not Putin) made it clear that NATO membership of Ukraine was a casus belli. This was arrogantly ignored, as a result, in part, of ignoring the history of the region and its peoples. Who knows where this leads. Russia says this is a matter of national survival. In light of history, I can’t help but agree. If we continue to push, the complacency of the general public - rooted in the unspoken belief nuclear war can’t possibly happen - we may be ever so briefly jarred (charred?) by a blinding awakening. None of this would really be necessary, if we had leaders who were as benevolent and enlightened as they pretend to be.

If history is written, Washington DC just may be found in the same paragraph as Potemkin Village.

If history is written …

Those pesky Vikings again – moving up the rivers of eastern Europe, first to loot & enslave, later to settle & breed! Perhaps if the Political Classes in London, Kiev, and Moscow could recognize their common Nordic ancestry, they could learn to get along. More likely, in this vale of tears, they would all get together to turn on the Poles.

As an aside, I am listening to Prof. John McWhorter’s excellent Great Courses series on “The Story of Human Language” – informative & entertaining; highly recommended! The series was recorded in 2004, before the present unpleasantness. Prof. McWhorter uses Russian & Ukrainian as an example of how dialects of the same earlier language can, over time, come to be regarded as separate languages despite a high degree of inter-communicability between speakers of those “different” languages.