Earn 9.62% per year with U.S. Treasuries Series I Savings Bonds

MORE PROOF WE ARE IN A CRAZY YEAR (2022) – you can legally earn 9.62% yield in U.S. Treasuries Series I Savings Bonds . (limit $10k per person and you’ll need to keep money locked in for one year minimum. Other limits – see U.S. Treasuries Department link below for more details).

Please be sure to run this by your financial advisor(s) before investing.

This is a super good deal, and the annual upper bound is really $15K, since you can use up to $5K of your federal tax refund (much less likely now) to purchase paper I-series bonds. If you have any dependents under 18, you could max out with up to $15K purchases per year per dependent using a custodial account.

The I-series are not the same as TIPS, which are really tradeable securities you can purchase using e,g, eTrade.

The 9.62% rate is an interesting data point on actual inflation. Compare, for instance Series EE bonds issued from May to October 2022 which earn a rate of just 0.1 percent, while Series I bonds issued during the same period pay a much higher 9.62 percent yield, which will fluctuate depending on the consumer price index.

And speaking of EE bonds, the Treasury guarantees that an electronic EE bond issued in June 2003 or later can be redeemed for at least twice the face value. If the interest rate isn’t enough to double the bond’s value, then the Treasury makes a one-time adjustment 20 years after the bond was issued to make up the difference. In effect, if you hold a Series EE bond for 20 years, you’d earn an annual yield of at least 3.5 percent. While that was appealing in 2020 and earlier, clown world inflation rates will drastically erode the paltry 3.5% annual yield as of mid-2021.

Issuer has a debt to GDP ratio of 124.67% and imposes a three month forfeiture of interest for redemption before five years. Issuer determines inflation adjustment by its own criteria, which it may change without notice to or approval of investor.

Issuer has also recently demonstrated a willingness to seize deposited funds without prior notice, negotiation, or compensation – even for depositors who have their own nuclear deterrents.

Even if I was Allowed and it was financially rewarding To put all my funds in treasuriesI, I would Only put a fraction of my savings in US treasuries.

In the depression era, Wise savers put their money in many different places because banks did fail and Savers lost all funds in those Failed banks.

Could you imagine if a Fidelity or Schwab failed? Not to worry you probably would get some of your money back …After likely years of liquidation.

I do think it is very dangerous to have all your funds in one asset with one custodian. If the custodian does not fail It is also possible to lose by having it stolen From that custodian account.

So messy multiple accounts, multiple investment types and a multiple currency System is more bulletproof. Handing off that list to Inheritors is challenging but I don’t see a viable simple alternative.

U.S. I Bonds Are a small part part of that system.

Ideally, not only institutions, asset types, and currencies should be diversified but also national jurisdictions. People in many countries have found themselves frozen in place and/or looted when their governments impose capital controls, devalue their currency, or seize asset classes.

In Britain, severe exchange controls were imposed at the outbreak of war in 1939 and remained in effect until Margaret Thatcher’s government abolished them in 1979, forty years later. British citizens were severely limited in how much money they could take out of the country (£50 in 1966) and were not free to invest in foreign shares or property without special approval. Those who were wise enough to park some of their assets outside Blighty before 1939 were not affected.

In 1933, the U.S. seized all privately-owned gold in country, paying US$ 20.67 per troy ounce for gold surrendered. It then devalued the dollar to against gold (and all gold-linked foreign currencies) to US$ 35 per troy ounce, picking the pockets of its citizens by 40%. These restrictions remained in effect until 1975.

In fact, it’s generally a bad idea to keep substantial assets in the country in which you live, since that puts them at the fingertips of a government which can seize them and directly sanction you. This is sometimes coarsely put “Don’t keep your ass and your assets in the same place.”

This diversification is part of the complete “five flags strategy” developed by Harry Schultz and Bill Hill for those who wish to preserve as much freedom and autonomy as possible in an increasingly coercive world.

There is a relevant scene in a sci-fi novel – if I recall correctly, “Lucifer’s Hammer” by Niven & Pournelle – set in the chaotic aftermath of a comet striking the Earth. The protagonist billionaire finally manages to reach his well-stocked bug-out bunker high in the mountains … to be greeted by his heavily armed security guard employee.

The armed former employee guard states that the world has changed, and this bunker is now his property, and the billionaire needs to scram. If/when the world goes pear-shaped, it is a scene that will undoubtedly play out many times in those New Zealand bunkers which the Rich & Famous have built.

There is an argument that all financial assets are only as good as the strength of the society. If things get really tough, then financial assets will be worthless and the only remaining value will be in real assets which produce tradeable goods & services. But real assets have to be defended. There are no easy answers.

U.S. Treasury website (treasurydirect.gov) Website has been down FOR SEVERAL DAYS … and yet all is quiet on the Western Front main stream media. Below is screenshot from Oct. 30, 5:30 PM Central Time Zone, and Washington Post article from Oct. 26 supporting I Savings Bond demand narrative … 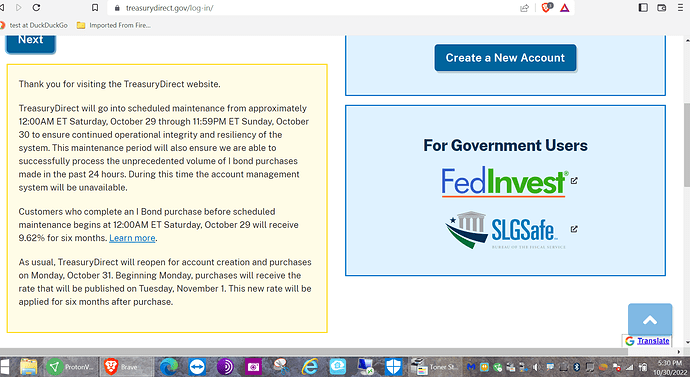 The user interface on the website is completely antiquated - to enter your password you have to (I kid you not!) type on a virtual keyboard on screen.

Pressing “back” at any point effectively logs you out. And I could go on.

Better yet: buy the ‘TIP’ Fund—collect a monthly dividend and then sell Call Options “against” your shares.

(…against is trader jargon for creating a ‘Covered Call’ position.)