The Event Horizon Telescope, a global collaboration of millimetre wave radio telescopes ranging from Europe and North America to the South Pole, which imaged the event horizon around the supermassive black hole in galaxy Messier 87 in 2019 has scheduled a press conference at 13:00 UTC on 2022-05-12 “to announce a groundbreaking discovery in the Milky Way.”

Rumour is that they have successfully imaged the much smaller but closer black hole believed to be at the centre of the Milky Way galaxy, called Sagittarius A*. If this is the case, it will be direct evidence of the presence of a black hole in the centre of galaxy. Indirect evidence from the motion of stars near the galactic centre has caused astronomers to believe that a black hole with mass or around four million solar masses must be present, but no direct observation has been made so far.

And here is Sgr A*, the black hole in the centre of the Milky Way galaxy. 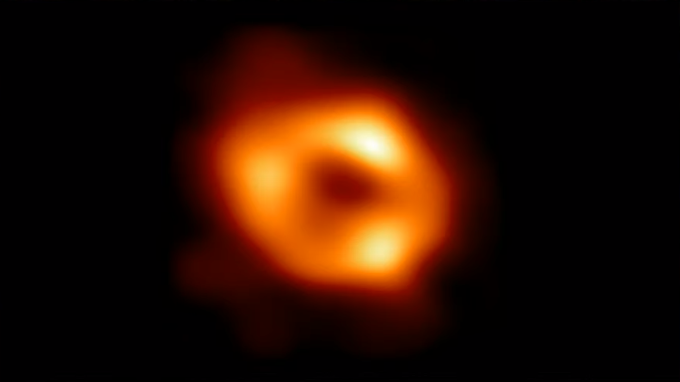 As with the imaging of the M87 black hole, data from the individual observatories was air shipped in crates of hard drives from the antenna sites to the supercomputer correlation centres in the U.S. and Germany where the data were combined to create the interferometric data from which the imagery was created.

Here is the issue of Astrophysical Journal Letters devoted to the discovery, “Focus on First Sgr A* Results from the Event Horizon Telescope”. The issue contains ten papers by members of the collaboration, describing the observations, data reduction, analysis, image generation, and astrophysical interpretation of the results. All papers are open access, with full text available for free to everybody.

OK, someone has to ask – Is it possible to take an image of an object from which no electromagnetic radiation can escape? It is the ultimate un-photographable black cat on a dark night.

Is it possible to take an image of an object from which no electromagnetic radiation can escape?

The picture you’re seeing is from thermal radiation emitted from the accretion disc around the black hole: where matter attracted to it spirals around the bottom of its gravity well, losing energy through friction and electromagnetic interactions and radiating it away, until it eventually falls into the black hole. The black hole itself, of course, emits no light (other than utterly negligible Hawking radiation), and appears as the circular shadow in the centre of the accretion disc.

What is persuasive about this image is that general relativity makes a precise prediction of the size of the dark shadow based upon the mass of the black hole, and the mass can be independently determined from the motion of stars orbiting in its vicinity. The image agrees exactly, within the precision of measurement, with the apparent diameter of the black hole as seen from our distance to the centre of the galaxy.