Everybody talks about the weather, but…

……maybe some people are actually doing something about it, sez Janet Levy on American Thinker: ”Is The Climate Being Engineered?” (Spoiler alert: yes.)

Please, dear polymaths, give me your dispassionate science-ey opinion about this piece.

But first, lemme try to get my head around the glorious irony (glorious” because a flawless and perfect specimen of anything is, somehow , awe-inspiring) :

the Left, rabid and distraught proponents of AGW, who believe that humans, without even TRYING! are drastically altering the Earth’s climate, will dismiss the idea that some humans can, and are, deliberately doing so as a fanatic conspiracy theory—

And the Right, which believes that the climate hysteria is much ado bout nothing, scoffs at the idea that we puny humans, even en masse, could actually manipulate weather, will be more than willing to believe that a small, sinister cabal of scientists IS doing so!

As a member of the latter group, I know I’m willing to believe it. A year or two ago Bill Gates “floated” the idea of “drawing a veil across the face of the Earth” by putting reflective particulate matter in space (in orbit?) it sounded INSANE to anybody who grew up with the specter of “nuclear winter” (Anybody remember that? The heyday of Schell’s book “The Fate of the Earth”?) And besides, if he wants to do that, whyn’t we just go back to coal? Isn’t that what they think caused the dramatic and now inconvenient cooling back in the 70s?
BUT: Did Gates not know that (according to Levy) this scheme is ALREADY implemented?

My head is spinning. I feel like somebody in an old horror movie:”I don’t know WHAT I believe any more, Carruthers!”

Dear polymaths, what do YOU believe?

(I have added a link in the original post to the American Thinker article so it’s easier to find for interested readers.)

The article itself is a kind of breathy and not terribly informed description of one proposal for geoengineering to mitigate warming due to increased levels of CO₂ in the atmosphere. This, and other “geoengineering” proposals, are discussed in detail in Oliver Morton’s 2015 book The Planet Remade (link is to my review). The specific approach which the American Thinker tries to describe, which is one of the most seriously studied, is the “Atmospheric veil” concept, which I described in my review as follows:

Atmospheric veil. Volcanic eruptions which inject large quantities of particulates into the stratosphere have been directly shown to cool the Earth. A small fleet of high-altitude airplanes injecting sulphate compounds into the stratosphere would increase the albedo of the Earth and reflect sufficient sunlight to reduce or even cancel or reverse the effects of global warming. The cost of such a programme would be affordable by a benevolent tech billionaire or wannabe Bond benefactor (“Greenfinger”), and could be implemented in a couple of years. The effect of the veil project would be much less than a volcanic eruption, and would be imperceptible other than making sunsets a bit more colourful.

Nobody is doing this today, and if anybody were we’d all know about it because it would involve a large fleet of airplanes dispersing tonnes of sulfates in the atmosphere every day, which would be obvious to anybody on the ground or who lives in the vicinity of an airport. This is a global-scale project which is entirely beyond the capability of “a small, sinister cabal of scientists”. The people who are studying this alternative are working in the open and publish their work in mainstream journals. The Wikipedia page for “Stratospheric aerosol injection” lists 76 references to such articles, including U.S. Patent 5,003,186 for “Stratospheric Welsbach seeding for reduction of global warming”, granted in 1991 and assigned to Hughes Aircraft Company.

The thing about geoengineering is that we’re already doing it, and have been in a big way since the second half of the 20th century. If we hadn’t the Earth could not support the population it now does. Here’s what I wrote in the review of The Planet Remade:

We live in a profoundly unnatural world. Since the start of the industrial revolution, and rapidly accelerating throughout the twentieth century, the actions of humans have begun to influence the flow of energy and materials in the Earth’s biosphere on a global scale. Earth’s current human population and standard of living are made possible entirely by industrial production of nitrogen-based fertilisers and crop plants bred to efficiently exploit them. Industrial production of fixed (chemically reactive) nitrogen from the atmosphere now substantially exceeds all of that produced by the natural soil bacteria on the planet which, prior to 1950, accounted for almost all of the nitrogen required to grow plants. Fixing nitrogen by the Haber-Bosch process is energy-intensive, and consumes around 1.5 percent of all the world’s energy usage and, as a feedstock, 3–5% of natural gas produced worldwide. When we eat these crops, or animals fed from them, we are, in a sense, eating fossil fuels. On the order of four out of five nitrogen molecules that make up your body were made in a factory by the Haber-Bosch process. We are the children, not of nature, but of industry.

The industrial production of fertiliser, along with crops tailored to use them, is entirely responsible for the rapid growth of the Earth’s population, which has increased from around 2.5 billion in 1950, when industrial fertiliser and “green revolution” crops came into wide use, to more than 7 billion today. This was accompanied not by the collapse into global penury predicted by Malthusian doom-sayers, but rather a broad-based rise in the standard of living, with extreme poverty and malnutrition falling to all-time historical lows. In the lifetimes of many people, including this scribbler, our species has taken over the flow of nitrogen through the Earth’s biosphere, replacing a process mediated by bacteria for billions of years with one performed in factories. The flow of nitrogen from atmosphere to soil, to plants and the creatures who eat them, back to soil, sea, and ultimately the atmosphere is now largely in the hands of humans, and their very lives have become dependent upon it.

This is an example of “geoengineering”—taking control of what was a natural process and replacing it with an engineered one to produce a desired outcome: in this case, the ability to feed a much larger population with an unprecedented standard of living. In the case of nitrogen fixation, there wasn’t a grand plan drawn up to do all of this: each step made economic sense to the players involved. (In fact, one of the motivations for developing the Haber-Bosch process was not to produce fertiliser, but rather to produce feedstocks for the manufacture of military and industrial explosives, which had become dependent on nitrates obtained from guano imported to Europe from South America.) But the outcome was the same: ours is an engineered world. Those who are repelled by such an intervention in natural processes or who are concerned by possible detrimental consequences of it, foreseen or unanticipated, must come to terms with the reality that abandoning this world-changing technology now would result in the collapse of the human population, with at least half of the people alive today starving to death, and many of the survivors reduced to subsistence in abject poverty. Sadly, one encounters fanatic “greens” who think this would be just fine (and, doubtless, imagining they’d be among the survivors).

Just mentioning geoengineering—human intervention and management of previously natural processes on a global scale—may summon in the minds of many Strangelove-like technological megalomania or the hubris of Bond villains, so it’s important to bear in mind that we’re already doing it, and have become utterly dependent upon it. When we consider the challenges we face in accommodating a population which is expected to grow to ten billion by mid-century (and, absent catastrophe, this is almost a given: the parents of the ten billion are mostly alive today), who will demand and deserve a standard of living comparable to what they see in industrial economies, and while carefully weighing the risks and uncertainties involved, it may be unwise to rule out other geoengineering interventions to mitigate undesirable consequences of supporting the human population.

Interestingly, geoengineering via stratospheric aerosol injection plays a central part in Neil Stephenson’s recent novel, Termination Shock, which gives a realistic view of the scale of the undertaking and its geopolitical ramifications.

Wow! Thanks so much JW!

This, and other “geoengineering” proposals, are discussed in detail in Oliver Morton’s 2015 book The Planet Remade (link is to my review).

Off topic, I know – but I really miss the days when our host made regular (and always informative) updates to John Walker’s Reading List.

but I really miss the days when our host made regular (and always informative) updates to John Walker’s Reading List.

Me too. The list was my primary source for selecting what to read and a wonderful source of knowledge for things I have not had time to read in full.

Those were the days when I didn’t spend half of my waking hours researching, posting, responding to, and doing system administration on this site.

Not a bad trade, in my not-so-humble opinion.

Climate engineering at smaller (local/regional) scale has been going on for the better part of the last 50 years. Cloud seeding has been and remains one of the main approaches - here is a brief summary from the book of knowledge on how it’s used in e.g. California.

China has an ambitious cloud seeding program as well and so do many other countries. Slovenia, for instance, flies hail suppression missions out of Maribor airport (link)

Back in the 1970s, Soviet and American scientists would meet to discuss peaceful uses of geongineering for e.g. hail suppression (source) 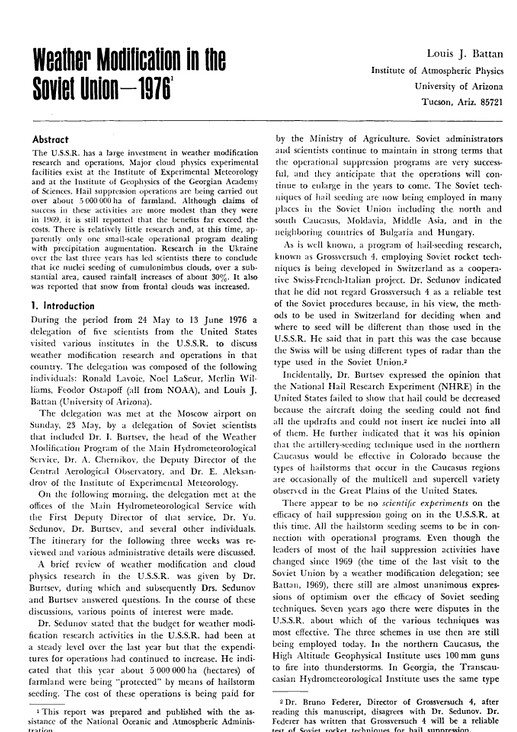 Can climate engineering be used for other purposes? Judging by this article in Slate (link) the early Cold War years had no shortage of wild schemes that look weirdly similar to the modern fad of assuming AI or ML or 5G can make anything better. Back then it was atomic energy.

Large-scale planetary manipulation techniques, like any engineering practice, can be used for both good and ill. In fact, a type of military geoengineering was actually practiced by both the United States and the Soviet Union half a century ago, and it had nothing to do with staving off climate change.

On May 1, 1958, at the National Academy of Sciences, University of Iowa physicist James A. Van Allen announced that Geiger counters aboard the JPL Explorer 1 and Explorer 3 satellites had picked up high readings at certain points in their orbits, indicating that powerful radiation belts (later known as the Van Allen belts) surround Earth. This was the first major scientific discovery of the space age. Ironically, and on that very same day, Van Allen joined Operation Argus—the U.S. military’s top-secret project to detonate atomic bombs in space, with the goal of generating an artificial radiation belt and disrupting the ionosphere. This was planetary-scale engineering—or “geoengineering.”

Depending on how much tinfoil lines up your hat, you might also take a look at other programs, like HAARP, which have been associated in popular culture with remote weather modification used for offensive purposes (link)