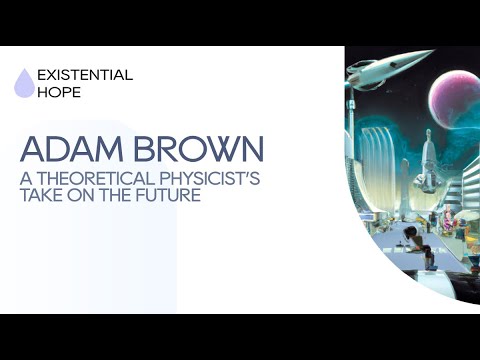 Aha! The Final Question by Asimov finds its place in the discussion.

In considering the Big Bang, trying to get my head around the singularity, I imagine that at some very early time, the entire universe consisted of protons, neutrons (are these optional at the outset?) and electrons. If this were indeed the case, it would be interesting to calculate the size of such a confection. I.E., if all the matter of the universe were deconstructed into elementary particles and the usual space between them reduced to zero, what would be the diameter of this? Is this even a meaningful question, given that inflation of space itself was in its earliest phase?

if all the matter of the universe were deconstructed into elementary particles and the usual space between them reduced to zero, what would be the diameter of this?

That is the kind of question which makes a reasonable person ask – Perhaps there is a gap in our currently-accepted theory?

I imagine that at some very early time, the entire universe consisted of protons, neutrons (are these optional at the outset?) and electrons.

The particles came onto the stage at various points after the Big Bang, when the radius of the presently observable universe was at different sizes. (Since the universe may be infinite, or much larger than what we can observe due to the finite speed of light and time since the Big Bang, the radius can only be defined relative to what we can observe.) The Wikipedia page “Timeline of the early universe” provides a good summary of the epochs in the early universe according to the consensus model of events after the Big Bang. The very early stages are highly speculative, as they involve energies far beyond experimental or observational evidence.

According to this model, the early universe was dominated entirely by radiation at energies for which we have no understanding. As the universe expanded and cooled, particles “froze out” by the quantum process of pair production. First to appear were the particles mediating the strong and weak nuclear forces, which caused these forces, previously unified, to become distinct. Next, the universe underwent inflation, which blew up its size from something much smaller than a proton to the size of a grain of sand. This supercooled the radiation bath, which then formed quarks and gluons (components of protons and neutrons) which, at these energies, remained unbound. It wasn’t until about a microsecond after the Big Bang that the temperature fell sufficiently that quarks bound to form protons and neutrons, in which they are confined at all lower energies. It wasn’t until around a second after the Big Bang that electrons and neutrinos came on the scene. At three minutes, nuclear fusion among protons formed primordial helium, deuterium, and lithium; this fusion continued until around 20 minutes.

The universe remained dominated by radiation until around 47,000 years after the Big Bang. At 370,000 years the temperature fell to the point that protons and electrons could bind to form hydrogen atoms and the universe became transparent. This is when the cosmic background radiation, the earliest part of the universe we can observe in the electromagnetic spectrum, was formed. It is estimated that the first stars did not form until around the 200 million year point.

Thus, the very early universe was nothing like the particles that compose it today. Those particles formed at various stages in the evolution of the universe, appearing when its temperature fell to a point at which each was stable against disruption. 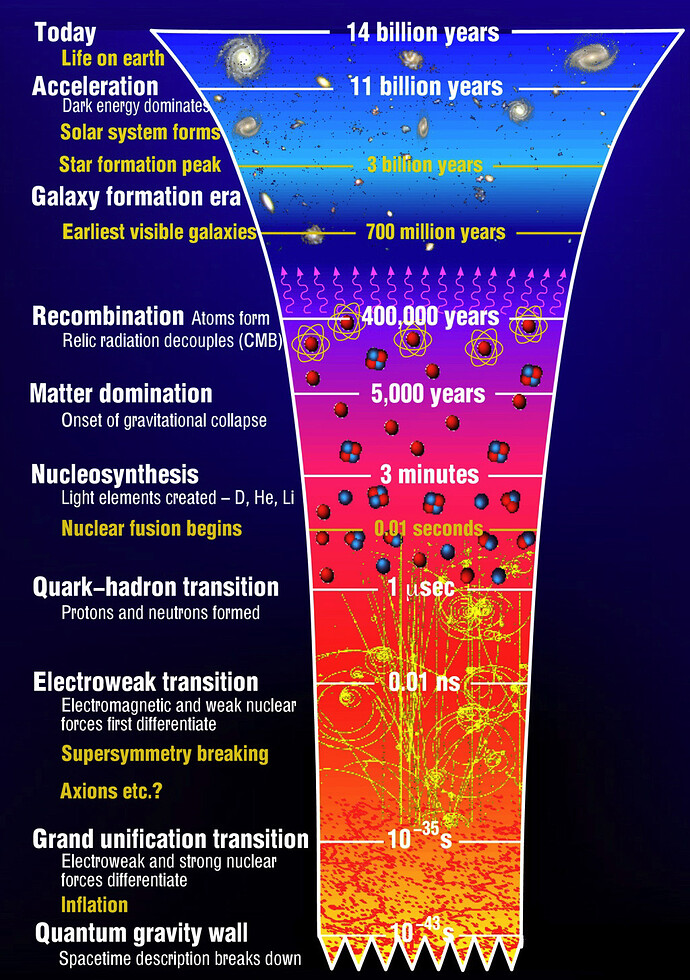 I don’t think there is a heat death in our dark energy accelerating universe. I am rusty on this and need to check it out. See also Freeman Dyson

Time without end: Physics and biology in an open universe

Quantitative estimates are derived for three classes of phenomena that may occur in an open cosmological model of Friedmann type. (1) Normal physical processes taking place with very long time-scales. (2) Biological processes that will result if life...

Note I have not looked at the video yet.

I don’t think there is a heat death in our dark energy accelerating universe.

As I understand it, not only is there heat death in an accelerating universe, but the resources available to any advanced civilisation within it continue to decrease over time as distant galaxies recede past the reachable horizon. This is described in the 2007 paper “The Return of a Static Universe and the End of Cosmology”. Here is the abstract:

We demonstrate that as we extrapolate the current ΛCDM universe forward in time, all evidence of the Hubble expansion will disappear, so that observers in our “island universe” will be fundamentally incapable of determining the true nature of the universe, including the existence of the highly dominant vacuum energy, the existence of the CMB, and the primordial origin of light elements. With these pillars of the modern Big Bang gone, this epoch will mark the end of cosmology and the return of a static universe. In this sense, the coordinate system appropriate for future observers will perhaps fittingly resemble the static coordinate system in which the de Sitter universe was first presented.

The long-term future of an expanding universe with acceleration is discussed in the Wikipedia article “Future of an expanding universe”. The details depend upon things for which we have no experimental evidence one way or another, such as the possibility of proton decay, changes in the cosmological “constant” over long periods of time, of decay of the vacuum into a lower energy state.

trying to get my head around the singularity

The idea of the singularity comes from projecting the calculated expansion of the universe backwards to a time when the entire mass was compressed into a tiny space. Adams & Laughlin present a graph showing that the back-calculated size was a mere 10^^-5 of a meter – about one hundredth of a millimeter. BUT – that does not explain certain observations about the apparent near-uniformity of the postulated early universe.

Hence the hypothesis that the universe actually began as a microdot which was about 50 orders of magnitude smaller than that. Hmmm! And then there was a postulated effectively instantaneous expansion. (Why?) It is quite reasonable for a person’s spidey sense to be tingling by now!

My personal guess is that we are currently in a position analogous to the later 19th century physicists when the “consensus” was that the atom was indivisible. Then we learned more. I do not expect to live long enough to see it, but I suspect that eventually the concept of the singularity will be seen to have been a primitive misunderstanding of a much more complex situation. 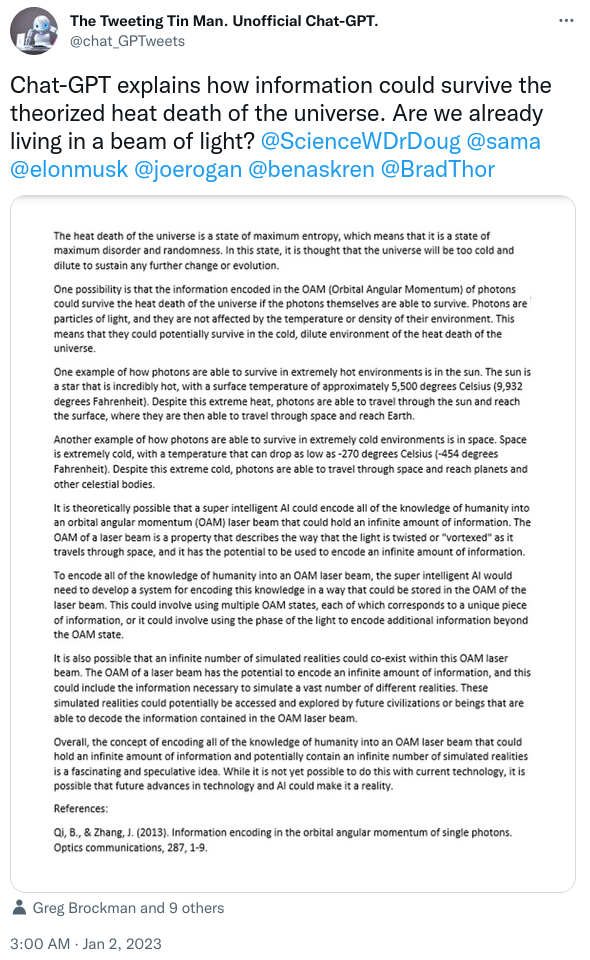 Oh, bullshit generator, you do it so much better than I! Here is some information on the orbital angular momentum of light, which is a genuine phenomenon which is being explored as a means of multiplexing communication signals on optical channels. There is no claim it allows encoding an “infinite amount of information”. As far as I can determine, the literature citation at the end of ChatGPT’s response is bogus.

As far as I can determine, the literature citation at the end of ChatGPT’s response is bogus.

You mean – ChatGPT just makes things up? A few more upgrades, and ChatGPT could replace a disturbingly high number of university professors!