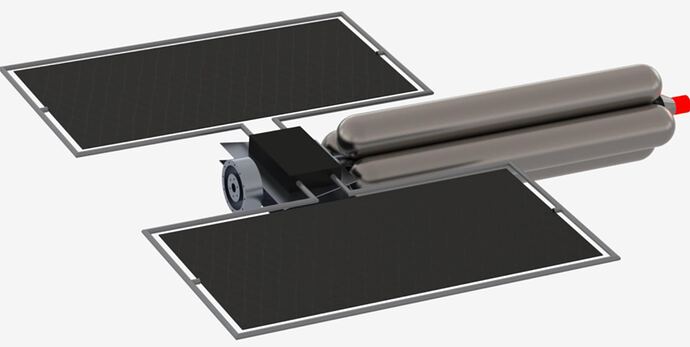 The NASA Innovative Advanced Concepts (NAIC) program provides seed funding for “innovative, technically credible, advanced concepts that could one day ‘change the possible’ in aerospace”. One project funded in the 2021 Phase I round was “Extrasolar Object Interceptor and Sample Return Enabled by Compact, Ultra Power Dense Radioisotope Batteries” proposed by USNC-Space. This is

… a compact 20 kWe, 500 kg dry mass, radioisotope-electric-propulsion spacecraft design powered by a novel Chargeable Atomic Battery (CAB) that is capable of ∆Vs on the order of 100 km/s with a power system specific mass of 5-8 kg/kWe. A spacecraft powered by this technology will be able to catch up to an extrasolar object, collect a sample, and return to earth within a 10-year timeframe. … The core innovation of this spacecraft architecture that makes this amazing mission possible is the CAB, which has a power density of over 30 times that of Pu-238. The CAB is easier and cheaper to manufacture than Pu-238 and the safety case is greatly enhanced by the CAB’s encapsulation of radioactive materials within a robust carbide matrix.

The Chargeable Atomic Battery is a radioisotope thermoelectric generator (RTG) built on the same principles as those used in interplanetary spacecraft since the 1960s, but instead of isotopes such as plutonium-238, which has a relatively long half-life of 87.7 years and presents nuclear weapons proliferation concerns in its manner of production, instead uses a much more radioactive isotope such as thulium-170, which has a half life of 128.6 days, decays to stable ytterbium-170 by beta emission, and is presently produced in high neutron flux reactors for use in industrial radiography and medical radiation therapy. Such an intense source, or a longer-lived less radioactive isotope such as cobalt-60 (half-life 5.27 years, decay to stable nickel-60 with beta and gamma emission), provides much greater power density and cannot be used to build a nuclear weapon (though they could be used in a radioactive dispersal “dirty bomb”).

With such a light, simple (no moving parts), and powerful source of electricity, a nuclear electric propulsion system could deliver up to 100 km/second of delta-v, allowing a probe to intercept an interstellar object flying through the inner solar system, rendezvous with it, take a surface sample, and return it to the Earth, all within ten years. The probe would be sufficiently light that a rocket such as Falcon 9 would be more than adequate to launch it, with delta-v left over to include heavy shielding in case of a launch accident and to send it on its way more quickly.

Here is a Universe Today article with more details, “Extrasolar Object Interceptor Would be Able to Chase Down the Next Oumuamua or Borisov and Actually Return a Sample”.

Just because my understanding of the rocket equation is insufficient (and the degree of that insufficiency may well be revealed by the question itself, since I’m not even sure it is comparing apples to apples) to have a frame of reference for comparison’s sake, what size chemical rocket would it take to impart that same delta-V?

instead uses a much more radioactive isotope such as thulium-170, which has a half life of 128.6 days

is there an inconsistency there with the claimed 3,650 day mission life?

is there an inconsistency there with the claimed 3,650 day mission life?

No. It just means they have to launch with sufficient isotope so that it will produce enough energy after however many half-lives have elapsed by the end of mission. For a mission with high delta-v like this, most of the mass at start of mission is reaction mass which will be expended during the mission. This will reduce the overall mass of the vehicle, which will require less power over time. But in any case, since the energy density of the nuclear battery is around a million times greater than chemical propellants, its mass will be negligible compared to the reaction mass used during the mission. Exotic isotopes are expensive, and sufficient isotope for a mission like this will probably be in the US$ 9 to 10 digit range, but the mass will be small.

Well, let’s work it out. The rocket equation for this case is:

where m_0 is the initial (wet) mass, m_f is the final (dry) mass, \Delta V is the change in velocity required and v_e is the exhaust velocity. Let’s take an ideal case, using the best practical chemical propellants, liquid hydrogen and oxygen, in an ideal engine with 100% efficiency, the 500 kg dry mass of the probe and 100 km/sec \Delta V. Using Units Calculator, we get:

That’s a lot of kilograms. Let’s express it in metric tons.

Two point seven billion metric tons. This is about half the mass of the Great Pyramid of Giza. And that’s just the spacecraft after you get it off the Earth and into an escape trajectory. To figure launch mass, you should multiply this by something between 50 and 100. So, say, 25 Great Pyramids on the launch pad.

This is why chemical propulsion is hopeless for missions like this. You either need something energy dense like nuclear propulsion or something where you don’t have to carry the power source with you like a solar, laser, or microwave sail.