Facebook ‘fact-checkers’ have decided that an article in the BMJ isn’t quite cricket, thereby meriting cautionary notices when readers shared it. The editors of the BMJ are hopping mad — or at least somewhat miffed. They issued an open letter to Zuck with some pointed criticism, including the terms nonsensical, inaccurate, incompetent, and irresponsible. They also note that Cochrane (publisher of medical meta-analyses) has been poorly treated by Instagram, another Facebook/Meta property.

The subject article is itself interesting, revealing troubling information about the Pfizer Covid vaccine clinical trials. Apparently, the FDA didn’t find this information worthy of investigation.

I wonder whether they can sue under UK defamation law.

A bit tangent. I thought instead of using Faceplant’s 22 year old woman’s studies major to fact check, I would run this past the experts at scanalyst.

Is the following a real? Supposedly a stealth bomber caught by google satellite.

Part of me feels like I am asking if jackalopes really exist.

I note that when I “View Larger Map”, Google Maps says it can’t find the coordinates, but it still shows the same image. This doesn’t look like a difficult image to fake, so I am suspicious. It also looks rather low to the ground for a B-2 and - since there is no nearby airport showing - doesn’t appear to be on approach or departure. I don’t know if they use terrain-following bombing runs. That could be an explanation for low flight and that, itself, it hard to say with certainty with undetermined depth of field.

Why would a B2 be flying backwards almost standing on its tail and spraying green paint on farmland?

To be fair to Google, I do know of a person who was distressed to find out that Google Maps showed a photo of her area which coincidentally was taken the same day her father had collapsed & died while out in the fields. The photo showed his dead body in stunning clarity. Google (Bless Them!) quickly agreed to replace that photo.

Is the following a real? Supposedly a stealth bomber caught by google satellite.

You never know about any computer imagery without a completely documented chain of custody, but there are several reasons to believe this may be an image of a B-2 bomber in flight, or else a very well-done fake. 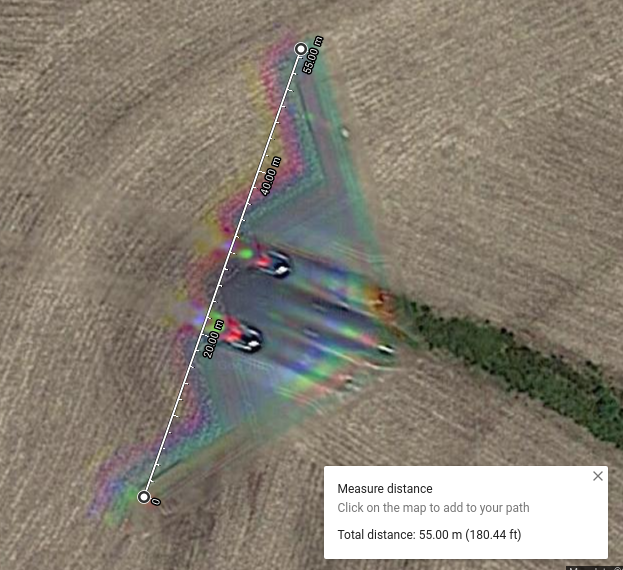 From shadows cast by adjacent objects on the ground, the Sun was relatively high in the sky, located at the lower left of the image orientation. You’d expect to see a shadow on the ground at a corresponding position, but if the plane was at a sufficiently high it would obscure only a fraction of the Sun and cast no observable shadow.

I have no idea what that curved streak and tilled marks that appear to emerge from the front of the plane and proceed to cross the road below it on the image are about.

Thanks for your (engineer + imaging software designer) analysis. Makes a lot of sense. Yes. I also thought of Whiteman AFB & looked for it on the map. For some reason, I had thought the spelling was ‘Wightman’, but realized I was wrong (&, naturally, thought about the de rigueur name change).

I think the B-2 in flight hypothesis fits the data well except possibly for the absence of a shadow. One could estimate the minimum flight altitude required to make the shadow disappear based on the angular diameter of the Sun. When I get home I’ll give it a whirl.

Thanks for the input. I thought no shadow was a give away, but didn’t know if it could be beneath the plane. I had no idea that the stealth was that optically stealth.

The B-2 is able to fly nap of the Earth, terrain-following missions, but usually flies at a high altitude (up to 50,000 feet) where is difficult to observe visually and little engine sound reaches the ground. As with all jet aircraft, its range is much greater when operating at high altitudes. It seems unlikely to me that a B-2 would be flying a very low altitude mission over populated farm country with numerous buildings along the flight path. 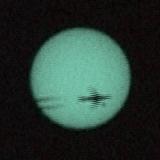 This is a picture of a jetliner passing in front of the Sun which I photographed during the transit of Venus on 2004-06-08 (Venus is visible just in front of the lower wing of the plane; this is a phenomenon which had never been photographed before this day, as the airplane had not yet been invented when the last transit of Venus occurred in 1882). The obscuration of the Sun by the plane and contrails would have caused a negligible shadow on the Earth, because most of the disc of the Sun is unobscured and would wash out the light of the small shadowed region. Here is a detailed analysis of this picture, including the original video.

I have no idea what that curved streak and tilled marks that appear to emerge from the front of the plane and proceed to cross the road below it on the image are about.

Looks like trees and shrubs to me. Possibly boggy lowland or regulated wetland that is left wild.

I agree. Looks like attempts to maximise ‘productive’ area on slightly uneven or otherwise hard to till land bordering a probable stream (where there are trees and lush greenery).

If you had hunted prairie dogs in the Dakotas, you would have seen plane shadows cross the fields despite the plane being at >30,000’. Prairie dogs see them too, and think “eagle” - and dive into their holes, not to emerge for about a half hour.

Without the benefit of being able to compute the plan area of a B-2, an eyeball estimate suggests that the obscured angular area of the Sun would be on the order of 10%. In such a situation, the shadow on the ground would be very fuzzy and of low contrast, hence hard to observe in the satellite picture. On the other hand, a sudden 10% decrease (and subsequent increase) in ambient illumination would be noticeable to both man and prairie dog.