Fifty years ago, on November 15, 1971, Intel announced the 4004 chip, the first commercially produced single chip microprocessor, The 4004 was originally designed as a part of a chip set for Busicom Corporation of Japan for its 141-PF printing desktop calculator. The 4004 was a general-purpose four bit processor with a 12 bit address space allowing it to address up to 4096 bytes of memory. The chip was built using silicon gate PMOS technology and contained 2,250 transistors. Maximum clock speed was 750 kHz, around 5000 times slower than contemporary Intel microprocessors.

The 4004 was designed by Federico Faggin, who had earlier invented the silicon gate transistor at Fairchild Semiconductor and would go on to design the Intel 8008, 8080, and Zilog Z80 microprocessors.

In this video, “der8auer” looks back on the 4004 and, unsuccessfully, tries to look inside a plastic packaged specimen. Intel discontinued the 4004 in 1981 and the remaining chips have become collectors’ items, selling for hundreds of dollars on auction sites.

Here is a presentation at the Computer History Museum on the occasion of the 35th anniversary of the 4004 with designers Federico Faggin and Ted Hoff. The meat of the event starts at the 12 minute mark with Ted Hoff’s talk. 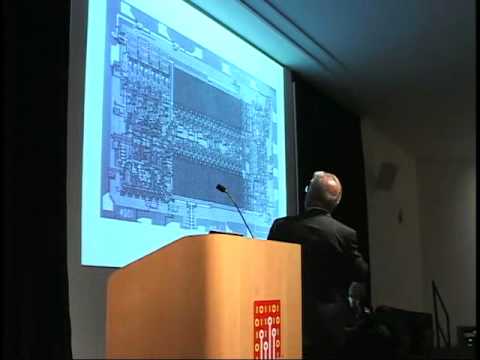