Since 2011, Polish engineer Paweł Zadrożniak has been making music with obsolete computer peripherals with a series of “computer orchestras” called “Floppotron”. The original used two floppy disc drives with their stepping motors driven by a microcontroller to generate notes.

That was then, and this is now, and nothing succeeds like excess, so on 2022-06-13 Floppotron 3.0 made its debut performance. The orchestra is composed of:

All of this is driven by an array of custom circuit boards, microcontrollers, cables, and powered by twenty PC power supplies, including sixteen 5 volt 18 amp supplies for the floppy disc wall. For complete details, see Pawel’s description in “ The Floppotron 3.0”. 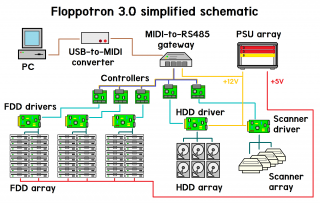 To the computer conducting the orchestra, it appears as a MIDI instrument with up to 16 channels, each of which can be assigned to a section of the orchestra by its program parameter. Existing MIDI compositions usually require tweaking for best results. He notes:

To create an arrangement, I usually start with already existing MIDI file. If I cannot find one, I have to make it from scratch – from hearing or using sheet music when available. Even if there is an existing MIDI for a specific song, re-arranging it for The Floppotron is still a time consuming process. Every „instrument” in the setup have its limits and the track must fit the note range it can play. Making a track sound good on the stacks of FDDs or a scanner usually involves a lot of tweaking. I also spend some time to add the fine details, like slides (portamento) or vibratos to mimic the quirks in vocal or guitar parts of original songs – these has to be recreated by ear. Making one arrangement for 3.0 usually takes me 3–4 evenings, which is a little longer than for the older Floppotron 2.0.

The work performed in the video above is “Entrance of the Gladiators” by Czech composer Julius Fučík.

For a trip down memory lane, here is where it all began: the Star Wars Imperial March performed by the original two drive Floppotron 1.0 in September 2011. This YouTube video has been viewed 6.7 million times. 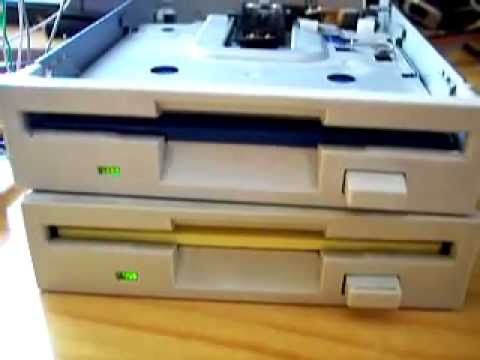